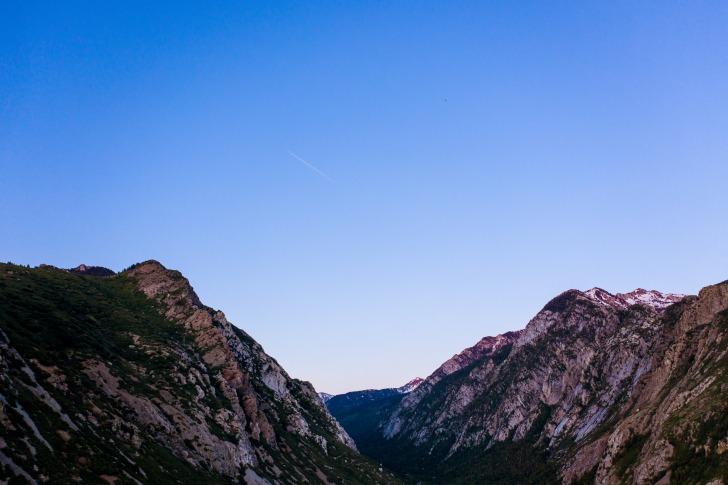 Sandy is a city that started as a place for hard-working miners to get a good night’s sleep and has evolved into a middle-to-upper class suburban oasis.

In 2018, Money Magazine ranked Sandy as the #35 Best Place To Live in the United States.

If you ever watch the HBO series Big Love, this was the home base for the families, so some of the scenery might look familiar, even though much of the show’s interior shots were filmed in California.

This city is close to mountains and world-class skiing yet is self-sufficient with everything a non-skier needs to enjoy their time in Sandy.

There are pockets of development, like the downtown area known as The Cairnes.

More than 40 parks fill the Sandy, Utah, area, with the most popular being Dimple Dell Regional Park.

Here you can explore 644 acres on foot, bike, or horse.

The Shops at South Town is the gathering place for shopping, dining, and entertainment.

It’s a suburban area so committed to keeping the neighborhood spirit it limits the number of short-term rentals and taxi cabs allowed in the community.

This is the best basecamp you can find in Utah for a trip into the mountains.

There's a ridiculously low overall risk here. I had to check the crime stats three times just to be sure. All of them rank well below the national average. The biggest weather risk is a snowstorm, which is also a boom for ski resorts, so you can't be mad at that.

The Utah Transit Authority makes it very easy to get all around the Salt Lake City metro area with a light rail system, busses and rides on-demand. You can take a shuttle to the ski resort of your choice. Even taxi cabs are strongly regulated and limited, so there isn't an excess of cabs in a residential area. There's a low risk here.

In 2020, there was one report of pickpocketing, giving this a low risk. Of the thefts reported, 60% of them were residential. Half of the thefts involved stealing from a car, either at a residence or in public.

Sandy gets 61 inches of snow a year on average, which isn't a disaster, but it's more than twice as much as the national average. The economy relies on snow activities, so this is good news, but if you aren't used to traveling in snow you'll need to quickly learn. Severe thunderstorms can happen in the summer and there's a rare tornado. Wildfires are a risk any time of year. If you are cool with mounds of snow, there's a low risk, and if you have never seen it before, there's medium risk.

There's a one in 3460 chance of being a robbery victim, so we'll call that low risk. You should be aware of your surroundings when in the major retail areas or tourist corridors so you don't create a crime of opportunity. For a better way to protect your belongings, check out major outdoor retailers like Columbia or North Face. They have wallets designed to keep them out of sight and safe in frigid conditions.

There's a low risk here as there aren't any hard targets, but any major metropolitan area could be at risk. I'm sure when the Olympics were here in 2002 there was a much higher concern, but day to day in the 2020s, there's a little ongoing risk.

I'm going to give this a medium risk because I have trust issues. This is a wealthy suburban area (average income is $94,018) and nice, god-fearing people. That puts anyone at risk of a scam because con artists prey on the nice side of a victim. . There has been a new version of an old scam showing up in Utah, where someone does the old "your grandson is in trouble" story and asks for money. The new twist is that someone shows up to pick up the money. Sandy Police recommend never answering the phone from a number you don't recognize.

There is a low risk for women here. The popular app Meet Up is even more popular in Sandy with plenty of activities geared toward niche events - like women's activities or hiking enthusiasts.

There's *low risk. On the plus side, the Metropolitan Water District of Salt Lake and Sandy (Metro) was awarded "Best Overall Water" and "Best Surface Water" at the 2021 American Water Works Intermountain Section Conference. The asterisk comes from a citation in 2019 where high levels of metal were found in the water. It was due to a malfunction after a major winter storm and the affected areas were notified within 24 hours as required. So, the tap water IS safe, it is just prone to sporadic issues like anywhere else. This is just a major one worth noting.

Safest Places to Visit in Sandy

The Shops at South Town is the place to go shopping and dining in Sandy for those who want the typical suburban experience.

It’s one of the largest entertainment districts in the state.

The team is known commonly as “RSL”.

Dimple Dell Regional Park is the most popular outdoor space in Sandy, but there’s so much more outdoor exploring to do just east of the area.

UTA runs hourly shuttles back and forth for less than $5.

Utah Olympic Park is 30 miles away.

You can take public transportation to get there, but it will require riding the light rail then transferring to a bus.

It would be a good trip to rent a car or have a local friend drive you there.

Places to Avoid in Sandy

Crime maps show all areas of this town are safe, with a spike as the community nears Interstate 15, but even the word “spike” is a stretch of the imagination.

There’s a hashtag for safety in Sandy.

Sandy Police started this mission to keep residents and visitors aware of crimes and teach them crime safety steps.

In a place like Sandy, people might feel safe enough to leave cars unlocked or even keep the keys inside.

Always leave your vehicle as if you are parking it in the most dangerous city ever.

Roll up windows, lock the doors, keep valuables out of plain sight, and use an anti-theft device if you can.

If you are enjoying the miles of trails in Sandy, never wear valuables and always be confident and aware of your surroundings.

Stay in well-lit areas at night.

Above all, trust your gut.

If something doesn’t feel right, run away and call the police if necessary.

Safety Tips for Traveling to Sandy

So... How Safe Is Sandy Really?

The crime numbers are so low when compared to national numbers it’s hard to believe they are true.

There are standard safety warnings like locking your car, hiding valuables from plain sight, always walking with confidence and looking people in the eye, don’t show off large amounts of cash, and the like.

There’s nothing specific about Sandy or any of its neighborhoods that should make a tourist think twice.

How Does Sandy Compare?