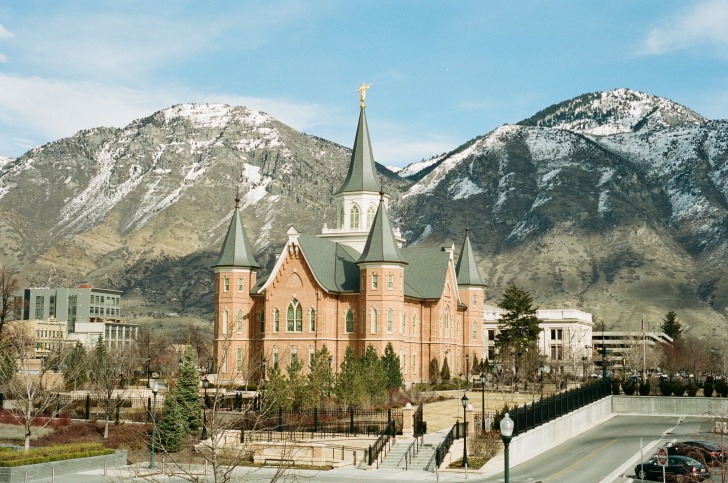 Provo, Utah, is perfectly placed between a giant freshwater lake and the beautiful Wasatch Mountains.

It doesn’t have the typical party college town vibe, as nearly all students at BYU are Mormon, meaning they can’t drink caffeine, much less drink alcohol or do drugs and party.

All students must agree to an honor code that even includes limiting what can be worn.

Nearby, the Provo City Center Utah Temple is a stunning religious building, no matter what your beliefs are.

Provo is more than 40 miles south of the busier Salt Lake City area, but it’s still the 4th largest town in the state.

21% of travelers to Utah choose Provo as their destination, just behind Salt Lake City and just ahead of St. George.

Provo is an idyllic town ranked as one of the best in America by Money Magazine a few years ago, and as the second-best for work-life balance by NerdWallet, while still being a startup hub city as determined by Forbes and Sparefoot.

A little spoiler here. Just about every warning and danger will be low here. There's just not much to be scared of or worried about. Crime is low, there are so many things to do, and people are just very nice.

There are so many public transport options, you might never need a taxi (but you're safe if you do). A rapid bus transit line goes between Provo and Orem (north of Salt Lake City), BYU students, staff, and families can score free rides on Utah Transit Authority (UTA) buses, and there's the FrontRunner rail line. To get around town, you could just hop a bike in this bicycle-friendly community or rent one of the e-scooters. All that said, there's a low risk for all options except someone might talk your ear off since people are so approachable here.

There is a one in 78 chance of being a theft victim. That doesn't include BYU as it has its police force. While crime statistics don't go deep enough on Provo to detail how many pickpocketing incidents occurred, there's a fairly low risk.

There's a low risk as there aren't any major disasters that generally happen in Provo. Tornadoes are rare, as are earthquakes. There's the occasional tornado with a thunderstorm, but that's lower than the national average. The biggest weather event is a snowstorm and Provo gets 43 inches a year. However, it's a state used to snowstorms and can handle them with ease, clearing roads quickly.

Very low risk of a terrorist act here, unless a terrorist group decides to declare war on Mormons and target BYU.

There's a low risk of a scam here. All the scams listed on the BBB website are the typical ones you'd see, like a call saying you've won the lottery or a BYU housing scam.

There's a low risk for women in Provo. This would be a good time to address the dress code. While there are no city standards, it's one of those "When in Rome" situations. This is a heavily Mormon area, and Mormon women don't wear clothing that exposes their legs above the knee, shirts that are strapless or sleeveless, or anything that is form-fitting. This doesn't mean you can't dress that way, but you might be getting lots of unwanted attention.

The tap water risk is low as it meets or exceeds state and federal requirements. There are plenty of conversations online about the "salty" taste of tap water, so if the taste bothers you, get bottled water. However, there's nothing dangerous in tap water. Some people said they will use it for bathing and brushing their teeth, but not for drinking.

Safest Places to Visit in Provo

You can swim, boat, fish, hike, paddleboard, kayak, and bike in this area.

Between the lake and Interstate 15, there’s not a lot to do aside from watching planes take off and land at Provo Airport.

East of I-15, you’ve got several community parks throughout Provo.

You should drive around and check out the pixel art wall murals throughout downtown.

There are 43 to find if you’re counting.

BYU is in the center of Provo and you shouldn’t miss the historic “Y Mountain” behind it as the valley rolls up into the mountains.

For an interesting conversation starter, ask someone why there’s not a “B” or a “U” around the “Y” on the mountain.

East of there you’ve got hiking country and lots of it.

For shoppers, you’ll want to spend a few hours at The Shops of Riverwoods.

This open-air mall features some of your favorite stores, some unique boutiques, and plenty of dining options.

Places to Avoid in Provo

There’s a local term some students at BYU use to refer to a hill near campus as “rape hill.”

It’s south and west of the main campus.

BYU Police say there’s never actually been a rape reported in that area, but there is still a sign stating “Do not walk in this area after dark.”

That’s good advice for any dark of any town, but it’s especially worth pointing out here.

Not because it’s dangerous, but because you can’t go in unless you are Mormon (and can prove it.)

You can spend time on the temple grounds and check out the visitor’s center, but any LDS church doesn’t allow non-Mormons in the temple.

Safety Tips for Traveling to Provo

So... How Safe Is Provo Really?

The national violent crime rate is three times higher and even the Utah rate is twice as high.

Even property crimes are 30% lower than state and national numbers.

Any university area, including BYU, can attract unsavory characters, but unless you are visiting friends who attend that school, you don’t need to worry.

Even if you are, avoiding being out after dark can do wonders to lower your chances even more of being a crime victim.

Dangerous places in Utah have their specific definition.

Unless you are coming from a small, safe town of your own, the crime rates here are nothing compared to what you see in major cities.

This doesn’t mean you throw caution to the wind.

Still, lock up car doors and keep belongings out of plain sight.

Keep wallets and purses close to your body.

Don’t get money from the ATM late at night.

You’re going to be so tired from all the outdoor activities anyway, you probably won’t even be able to stay awake past 10:00 p.m.

How Does Provo Compare?