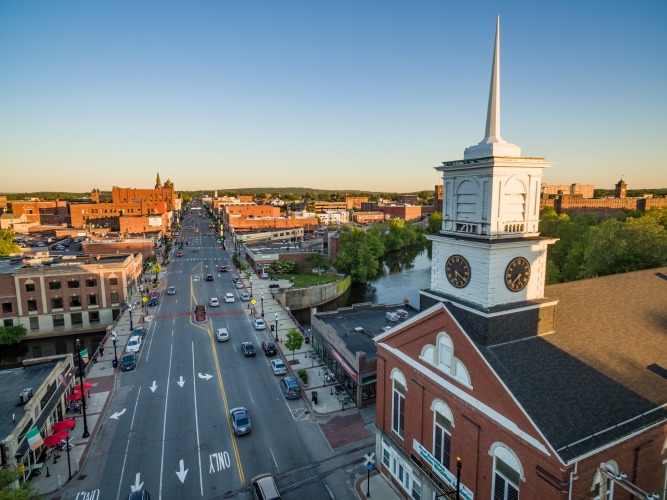 Nashua – New Hampshire’s Gate City, was settled in the 1650s as a fur trading town.

Nashua was named for the nearby Nashua River that splits the town.

Its name, in Penacook, means beautiful stream with pebbles on the bottom.

Nashua is ranked as the 2nd largest city in the northern section of New England (i.e., NH, VT, and ME) and second only to Manchester.

Nashua, located on the southern New Hampshire – Massachusetts border, covers more than 31 square miles and is home to 90,323 residents in 2021.

It is only 30 minutes from the seacoast beaches, an hour to most lakes and mountains, and a great option for Boston commuters as a Boston bedroom community.

Although too small to be considered a ‘college-town,’ Nashua boasts seven higher learning institutions, including Southern New Hampshire University and Franklin Pierce College.

Nashua is a beautiful New England city with exceptional public art that offers serious biking throughout the warmer months and dynamite cross-country skiing, just outside of the city when winter rolls in.

The city is also known as a cultural hub and ranked two times as Money Magazine’s (1987 and 1997) number one ‘best place to live in America.’

Other than a few areas in Nashua’s downtown, Nashua is a relatively safe city, but still a city! The rate of violent & property crimes in Nashua falls below the New Hampshire average and significantly below the national average. It is noted that Nashua’s crime rates are more than 50% below national averages. The recent crime trend in Nashua shows a decrease of nearly 30% - year over year, with US News ranking Nashua among the ten safest cities in the nation in 2020.

The city is served by the Nashua Transit System (aka CityBus), which offers eleven routes to various locations, which drop to only three after 7 PM. There are also paratransit and senior options. But Nashua is a city, and with that comes certain inherent risks. Be cautious and stay alert. Don’t walk alone and know where you are going.

Nashua, like most cities, has its share of pickpockets. Fortunately, there are simple but effective techniques to avoid being 'pickpocketed.' Stay un-distracted and pay attention. When in a crowded area, hold your purse close to you, or better yet, put your valuables in an inside coat or front pants pocket.

Nashua is considered to have a 4-season continental humid climate. The most dangerous climate events would be heavy snowfall, typically caused by the nor-easter storm track. In addition, Nashua and New Hampshire’s risk of earthquakes and tornados fall below national averages.

The reality is that no one can altogether avoid street crime in a city. But preparedness and vigilance help mitigate the chances of being a mugging victim. Travel in groups, know where you are going, and stay alert.

Terrorism in Nashua is at a level for most American cities, although it is at least an hour from most major cities, where terrorism may be more likely to occur. The New Hampshire Department of Safety’s Department of Homeland Security and Emergency Management is the local agency tasked with managing terrorism and suspicious events.

Scams are a part of a digital culture but can be perpetrated on others when in person. Fraud and consumer scams are found everywhere, including Nashua. The Nashua Police Department (NPD) offers online guidance and links to federal programs regarding scams.

As one of New Hampshire’s safest cities, women will find it safe to travel during the day if staying alert to their surroundings. Nashua's nighttime travel is safer if traveling in a group rather than alone. It is smart to take your mobile phone when traveling and research the route and location prior to your departure.

The tap water in Nashua is safe to drink. For additional information, check out Nashua’s tap water quality report for 2020 – available online. There have been no violations for the Pennichuck Water Works for the past decade.

Safest Places to Visit in Nashua

Nashua’s downtown offers a charming example of why Nashua is such a great city.

The downtown area is Nashua’s most walkable part, although much of Nashua is easily explored by bike.

The downtown area of Nashua, NH, is home to an eclectic mix that includes wine bars, gift boutiques, people-watching perches, award-winning restaurants, and Irish pubs, to name a few.

Nashua is an outdoor lover’s haven. Mine Falls Park offers many trails through its beautiful setting that can be traversed by foot or bicycle.

Before heading out, get the Mine Falls Trail Guide. Greeley Park provides a chance to relax in nature, and it offers picnic tables and grills.

Head over to SkyVenture, a Nashua company that offers skydiving simulation and rock climbing (among other activities) for the more adventurous types.

Nashua is home to several microbreweries and distilleries.

These include Djinn Spirits, Spyglass Brewing, Millyard Brewery (which also offers live music), and IncrediBREW, to name a few.

History buffs will find the Nashua Historical Society offers a rich historical perspective of the area.

Placess to Avoid in Nashua

Most of Nashua and much of New Hampshire are safe from an overall perspective.

These include French Hill (east of Nashua’s downtown) and the tree street area in downtown, although some consider the downtown area defined by ‘number streets’ can also have spillover crime from the ‘tree streets.’

Avoid unfamiliar areas and carry a mobile phone for emergencies if traveling alone.

With a 2020 crime rate that falls 42% below the average of US locations, Nashua is safe to travel if you are well-prepared and cautious.

Commercial locations that close for the evening should be avoided unless necessary to travel there.

Safety Tips for Traveling to Nashua

So... How Safe Is Nashua Really?

By most people’s standards, Nashua is considered a safe city, especially when compared to other cities of similar size across the country.

Travelers who are proactively cautious and well-informed will find it simple to enjoy all that Nashua has to offer safely.

But Nashua is a city, and with that comes a certain level of crime.

Use common sense, trust your instinct, and reach out to local officials for guidance to ensure your visit to New Hampshire’s Gate City is enjoyable and safe.

How Does Nashua Compare?