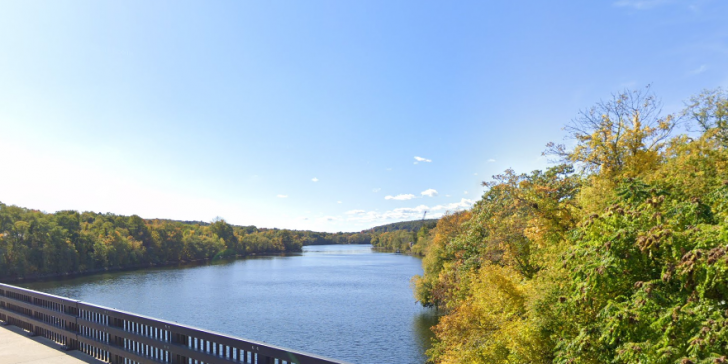 Haverhill, Massachusetts, is tucked between the Merrimack River and the New Hampshire state line in a region known as the Merrimack Valley.

The city has a rich history and was settled in 1642.

Several attractions dot the landscape, but Haverhill is a mostly residential community that isn’t even listed as one of the cities in the Merrimack Valley tourism guide.

The city has just one hotel, but nearby Newburyport near the coast and Andover to the southwest has more options.

Haverhill seems to be a city trying to revitalize itself as of early 2023.

The downtown offers the historic buildings without the traditional New England charm.

There’s a bit of grit to this city of 68,000 people mixed with open spaces of trails and its own ski resort.

Nearby Winnekenni Park offers trails, water activities, and even an old castle (more on that to come).

A few historical buildings and museums can be found here, but you’ll really want to focus on the annual events that bring people to town.

From art walks to Restaurant Week to the River Ruckus, the heart and soul of the community can be found in local gatherings instead of major tourist attractions.

Salem has a rich history as it was settled in 1626 and was home to the infamous Salem Witch Trials.

However, Salem, New Hampshire, is just across the state line from Haverhill and is a rural residential area.

Confirm that you’re looking at the right Salem, as there are several hotels in Salem, New Hampshire, that could be misleading if you’re looking for the other Salem.

Salem, NH, does have “America’s Stonehenge,” which is believed to be the oldest man-made structure in the country.

There's a low risk with some definite seedy areas of town to avoid. Some of the crime rates don't add to as I did the number crunching, giving one of the more shocking big-picture crime statistics I've seen, but we'll talk through that in a bit. Is it the most exciting town around Boston or the in Merrimack Valley? No.

Merrimack Valley Regional Transit Authority has local bus routes through Haverhill and the surrounding cities with one route that goes into New Hampshire. You can use the bus to connect with Massachusetts Bay Transportation Authority (MTBA) trains getting to Boston. Taxis and rideshares are available, but having a rental car allows you to explore the region and the coastline, plus the great nearby historical cities at your own pace.

10 pickpockets were reported in 2021, and over the past five years, the city averages about 7 pickpockets a year. Not a huge risk there, but enough to remind you to limit what you carry with you and keep wallets in your front pocket or inside a jacket pocket instead of the back pocket. All the reports since 2018 were pickpockets and not purse snatchings.

This region is susceptible to a wide range of risks, but all of them come with plenty of warning. Being this close to the coast, tropical weather knowledge is important. The hurricane season runs from June through November. Flooding is a risk with the river running through the heart of the city. Intense winter weather and summer severe thunderstorms happen each year.

One of the head-scratching parts of the crime rates here includes a higher-than-average violent crime rate, but a robbery rate that's 70% lower than the national average. Just 17% of robberies were person-to-person. Looking at the raw numbers, there were just 12 robberies in 2021.

There's a low risk here since there isn't a large population and nothing that's really going to be of interest to a terror group. The U.S. is always focused on Lone Wolf acts, which had made headlines over the past few years. You can get alerts from Homeland Security or review the latest advisory bulletin on its website.

2022 saw a rash of spoof call scams with people posing as officers and demanding personal information and money. Be cautious about who you share your phone number with, and know you'll never be asked to give that kind of personal information over the phone. If you didn't initiate a call, don't share any information.

As long as women stay out of certain parts of town and don't walk around at night alone, they will enjoy some of the attractions in Haverhill. There can be a sense of unease downtown, so it's best to go with a friend or a group.

Part of the reconstruction and revitalization work in a city this old involves replacing outdated pipes and improve water quality treatment. Despite the outdated infrastructure, the 2021 Water Quality Report shows full compliance and no violations. If you're staying in an old building, let the water run cold for two minutes before consuming to remove any debris or lead risks in the water.

Safest Places to Visit in Haverhill

The Greater Haverhill Chamber of Commerce has a secure website with a free Travel & Resource Guide.

The Greater Merrimack Valley Convention & Visitor Bureau website is a wonderful resource for finding regional things to do, as Haverhill isn’t that robust of a tourist town.

Art lovers can visit TeamHaverhill.org for updates on the blossoming art community in Haverhill.

It’s hard to imagine, as you read a digital article, that once upon a time people had to invent how to do mass publications and printing.

That’s the legacy honored at the Haverhill Museum of Printing.

Exhibits cover the advent of hot metal pressing through typewriters and all the accessories that evolved for printing.

One of the largest collections of firefighting memorabilia, artifacts, and stories in New England is in Haverhill.

While it’s only open seasonally, there’s a lot of great stuff to see here when it is open and a robust number of videos and photos on the website.

From fire safety lessons to women in firefighting to a 9/11 memorial, if you can see this attraction, you’ll enjoy it.

Ski Bradford is a ski area within the Bradford city limits, and it’s open for day and night skiing.

Rental equipment, from full sets of gear to individual items, are available and ski or snowboarding lessons can be purchased on-site.

Ski runs for all levels are here with three black diamond runs.

If you are renting equipment, get there an hour early to be custom fitted.

Buy tickets online and save the barcode on your phone to avoid pulling out your wallet in a crowded ski resort.

Use the lockers provided and don’t leave anything unattended.

More than 700 acres await explorers for all seasons, with a special pond dedicated to ice fishing and ice skating when conditions allow.

The larger Kenoza Lake in the center of the park has been a population recreation spot since the 1800s.

The Winnekenni Castle is in this park and while regular tours aren’t available, there are public events held throughout the year.

It’s a great Instagram photo from the outside, in any event.

As a former theater performer who played Abigail in The Crucible for a community college play, I have to start this next one with, “Now look you… ALL OF YOU…” The Buttonwoods Museum is rich with history from Native Americans through the settlers and into the industrial area that made Haverhill the “Queen Slipper City” for its shoe industry.

But some don’t know if there’s a connection to the Salem Witch Trials at this museum, from a defiant judge to several Haverhill women who made the mortal trek to Salem.

Across the river is Bradford, which is still in Haverhill, but has a whole different vibe and crime risk.

In fact, they each feel like their own separate city.

An art walk follows the river between the bridges.

Places to Avoid in Haverhill

Looking at crime maps, it’s normal to see a downtown area in any city have higher crimes rates.

Haverhill is a slightly different story.

The downtown is a little rough.

For those of you from big cities, you won’t blink walking downtown.

For those from more pristine communities, you might shudder a bit.

It’s best to visit downtown during the day, but don’t expect a charming Main Street as you might in some other communities.

Haverhill has gangs, and the Haverhill Gang Task Force spends a lot of time in these neighborhoods.

A good chunk of drug and gun crimes happen in these neighborhoods.

Some of the attractions in Haverhill are only open seasonally, and that includes a few of the museums.

You should check the hours before you book your trip.

Safety Tips for Traveling to Haverhill

So... How Safe Is Haverhill Really?

Haverhill’s a city that gritty and slightly run down, but trying to revitalize itself with the limited funds it has.

Work needs to be done on the infrastructure, like those water pipes and roads.

In addition to crime statistics, I also do research on social media forums from locals.

Haverhill has three categories of feedback:

Haverhill’s violent crime rate is 30% higher than the national average, which isn’t as drastic as in some U.S. cities being plagued by violent crime surges.

2021 saw the highest violent crime numbers in Haverhill since 2014.

Here’s the odd part – of the 376 violent crimes that happened, 344 of those were aggravated assaults.

All but 9% of violent crimes were aggravated assaults.

Add to that information that just 5% of violent crimes happened against strangers, and 68% happened in homes.

There’s not an overwhelming risk for a visitor here.

Another oddity in the crime data is that there were 369 thefts, which is almost 2/3 lower than the national average.

I haven’t seen that in any city of the hundreds I’ve reviewed.

Haverhill has been hit hard by another American problem – the opioid crisis.

66% of the drug overdoses happen in the Acre and Mount Washington neighborhoods we discussed above.

Illegal drugs in America are now being sold in forms that look like prescription drugs but could contain lethal amounts of fentanyl.

Staying away from any drug activity or verbal argument is paramount to safety here.

How Does Haverhill Compare?