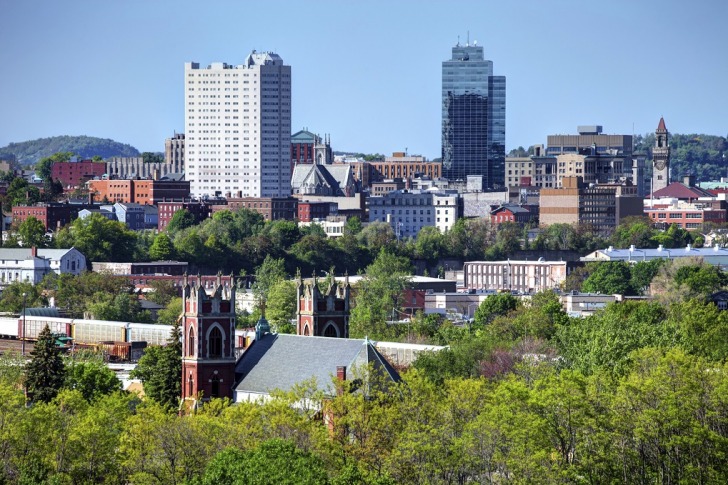 Worcester is the second-largest city in Massachusetts and is often referred to as “Wormtown” – a nickname from 40 years ago that still keeps coming up for debate (and has nothing to do with actual worms).

It’s just one of many unique elements of this central Massachusetts city.

A more widely-accepted moniker is the “City of Seven Hills” due to the hilly nature of the city.

First, let’s break a bunch of pronunciation rules and talk about how to pronounce Worcester.

If you say it with a Massachusetts accent, it will sound more like “Woos-stah.”

The city is home to 206,000 people and growing and sits an hour west of Boston and northwest of Providence, Rhode Island.

It’s hard to overshadow Worcester, however.

This is where the street car diner was created, and many still fuel hungry stomachs today, while the bright yellow smiley face was also the invention of local Harvey Ball.

A giant polar bear named Orson will wave you in as you arrive.

He’s an icon of Polar Beverages and stands atop the factory roof.

There’s also love in the air and on street signs and businesses – because Worcester is the “heart of Massachusetts.”

Worcester has a low overall risk, with crime rates at or slightly above the national average, but it's one of the safer medium-sized cities - even if that isn't saying much given all the violent crime in America. It's also a very interesting city with a lot to see and do.

You can take public transportation around the city and between Boston and Worcester. Taxis and rideshares are available, but you'll likely want to explore Worcester with a car rental.

There were just eight pickpockets reported in 2021, so that's a low risk. However, you should use caution with that rental car, as 48% of the thefts are related to car burglaries.

Worcester can get a wide range of dangerous weather events, from snowstorms to blizzards to severe weather and even tropical weather or tornadoes. The emergency management website is very helpful to learn about safety steps for each risk.

While the robbery rate is at the national average, nearly half of those happen on public streets. Treat this risk with extra caution, especially if you are out at night. Lower your risk by not wearing valuables or carrying expensive and attention-drawing purses.

There's a low risk here. Boston would be a more likely target since it's so large, with many high-profile places and a busy port.

The most reported scams here are phone spoofing calls that target locals. A tourist shouldn't be worried about any scams but should keep a keen eye on anyone promising a deal that seems too good to be true.

Statistically, women are actually less likely to be the victims of a violent crime. Nothing else in the crime data suggests women should have an elevated risk. Use common sense and standard safety precautions, especially if you are out enjoying the nightlife.

The 2021 Water Quality Report shows another year of full compliance and no violations. In older cities like Worcester, there's an ongoing risk of lead pipes causing water issues. You can reduce that concern by letting tap water run for a minute or two before using the water. This clears out any debris or residue the water can pick up while still stagnant in the pipes.

Safest Places to Visit in Worcester

The city website, worcesterma.gov, has a visitor’s guide section to review.

While there’s no official tourism site just for Worcester, you can visit discovercentralma.org to learn about Worcester and other central Mass cities.

Worcester is one of those cities that just exudes charm, with historic buildings, tree-lined streets, and fresh-baked something scents filling the air from the vibrant food scene.

Quinsigamond State Park (“Quinn-sig-uh-mund”) and the associated lake is a great place to start, with walking paths and one of the best rowing courses in the world.

The park is open throughout the year, so you can cross-country ski even in the dead of winter.

The EcoTarium is a museum dating back to 1825, inspiring generations of science and nature lovers.

Three stories of interactive exhibits are included in the admission price, and you can see live animals too.

New England has an abundance of historic mansions, but there’s just one in Worcester.

That’s the Salisbury Mansion that takes you back to 1830s Worcester.

For a more in-depth look at the city’s past, visit the Worcester Historical Museum.

There’s a lot more history than you might realize in this city – including a very important connection to the space exploration program.

The Worcester Art Museum touts itself as covering “51 centuries of art,” and the building itself is an artistic marvel dating back to 1896.

Bancroft Tower looks like the remnants of a medieval castle, but it’s actually a memorial with an interesting story behind it.

You can climb to the top if you’d like.

Don’t overlook the lunch car diners in Worcester, even with the growing fine dining scene.

Several of the locations here are historical places, like Miss Worcester.

George’s Coney Island is another staple of Worcester, serving up what some call the best hot dogs in the state.

Places to Avoid in Worcester

While there aren’t neighborhoods that are “too dangerous” to visit, the Main South neighborhood and connecting areas south and east of there are the more “sketchy” parts of town.

The police do focus on sending more officers to neighborhoods that become crime hot spots, so the more dangerous neighborhoods could change before your visit.

You can use the crime mapping tool from the police department to see crime trends during a selected date range.

For example, I used it to see where the most violent crime happened in the past six months, and the Green Island neighborhood was one of the hot spots.

Also, when I searched for car thefts or break-ins over the past six months, I found out Belmont Hill is one of the safer areas.

A warehouse at 88 Webster Street has been the scene of several violent crimes.

The warehouse is known as an “after-hours” party spot, but local bands also sometimes use the area to practice.

It’s in a sketchy part of town, and the parties are way too risky for an out-of-towner to explore.

Safety Tips for Traveling to Worcester

So... How Safe Is Worcester Really?

While the violent crime rate is 30% higher than the national average, just 20% of violent crimes happen against strangers.

The police use crime data to find crime hot spots and then saturate that neighborhood with officers and prevention tactics while arresting repeat offenders.

“The crime analysis division crunches numbers from every arrest, and it uses that data to guide where to place officers,” said Worcester Police Lt. Sean Murtha.

“This type of crime cuts across races.

All races in Worcester are obviously involved in crime and what we want to do is make it so people in all the neighborhoods can be safe and live in those neighborhoods without having to worry about gunshots popping through their windows, having to put their kids in the bathtub, so they don’t get shot.”

However, that plan has created conflict in the community, with some accusing the police of specifically targeting lower-income and minority neighborhoods, leading to systemic racism.

In November 2022, the Massachusetts Attorney General and the U.S. Department of Justice started a formal investigation to see if the police department “engages in a pattern or practice of excessive force or engages in discriminatory policing based on race or sex.”

As we discussed, you can lower your risk from a visitor’s perspective by staying away from the more dangerous neighborhoods and doing crime research.

Don’t leave your car unlocked when you park it, and always roll up the windows.

Take all personal belongings out of the car when you park.

If you feel anything even remotely suspicious is happening, get out of the situation and go to a public place and ask for help.

All of that said, there are far more dangerous cities in America – even ones the same size as Worcester – so you don’t have to worry too much about visiting here.

How Does Worcester Compare?