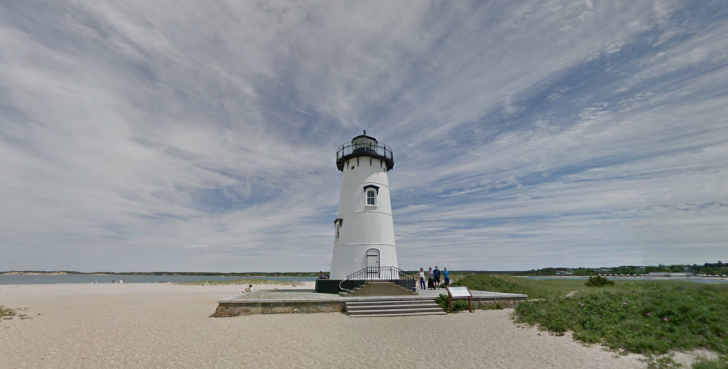 Seven miles from Massachusetts, you’ll find Martha’s Vineyard, an island with six cities and a world of potential for a getaway that feels 700 miles away from everything else.

A ferry will take you from the mainland to either Vineyard Haven (aka Tisbury) or Oak Bluffs.

Add in Edgartown and adjacent Chappaquiddick Island, and you’re “Down-Island.”

The “Up-Island” cities of West Tisbury, Aquinnah, Chilmark, and a small fishing community of Menemsha.

A good way to remember this is that “Down-Island” is full of cities where you can “get down and have fun.”

The towns in this region are bustling with more activity and have more crowded seasonal beaches.

“Up-Island” is an “up at dawn” kind of place to watch the sunrise and relax.

There’s a much slower way of life Up-Island.

Chappaquiddick Island is a notorious location where Ted Kennedy was involved in a car accident that claimed the life of his female passenger.

The ensuing investigation and suspicion are now a “Chappy” legend.

While the bridge where the accident is still open, you’ll have to find that for yourself.

We aren’t going to turn a tragic site where a young woman was left to drown into a tourist attraction.

However, those who work on the island are used to being asked and would be happy to give you directions.

Martha’s Vineyard has great options on every coastline, from sandy beaches to rocky shores and a few naked people on one particular beach.

Some of the scenes here might look familiar if you’re a fan of the movie Jaws, as the movie was based on a fictional town that was really Edgartown.

One travel note – you might see references to “Gay Head Lighthouse,” which is now known as Aquinnah Lighthouse.

Those two names mean the same thing, but Aquinnah is the proper term for it in 2023.

There are several other police departments on the island as well, including:

Safely getting onto and around the island while learning the basic lay of the land is important for anyone who wants to get the most out of a trip to Martha’s Vineyard.

There's a low risk with a higher potential, but with so many law enforcement agencies, the crime rates have stayed low consistently. This is a wealthy and affluent island with well-placed and regularly monitored security systems, so you have that element of safety too.

You'll need to take a ferry from either Hyannis or Woods Hole to get to the Vineyard. Martha's Vineyard Transit Authority runs the bus system here, and since this is a tourism community, there's a stronger sense of safety. Cars are available for rent, and you can also use taxis or rideshares to get around.

I was surprised by the low number of pickpockets in busy cities like Edgartown and Oak Bluffs, but you should never let your guard down. Limit what you carry to the bare essentials, and never leave baggage lying around. The crowd here seems likelier to tell you that you dropped your wallet than to take it and run.

Hurricanes, flooding, winter storms, and severe thunderstorms are the biggest risks here. Even the natural bridge between Chappy and the Vineyard has been worn away by years of hurricane damage and erosion.

This is a low risk, and to be quite frank - there's a bigger chance your rental home will get burgled than you'll be robbed on the street. This shouldn't allow you to act a fool late at night and put yourself in a potentially dangerous situation.

There's a low risk here, with mother nature being a far worse potential enemy. The only elevated concern would be due to the fact that President Obama has a family home here. However, that risk also comes with increased security, including the Secret Service.

While phone calls and email scams target residents, visitors have been prone to rental scams. You won't find an insanely low price on a rental here, especially in the summer, no matter how good of a bargain shopper you are. Anyone who insists on money being wired to reserve a home or can't show proof of a rental permit should be reported to the police.

This is a getaway for women, whether with their families, on solo trips, or on girlfriend getaways. The risks are low as long as standard personal safety practices are followed.

Each city should produce an annual Water Quality Report on their websites. For example, Edgartown's water quality report showed full compliance and one violation that didn't threaten water quality. You should check the city websites before you visit to see if there are any island-wide issues.

MVY.com is the tourism website for the Vineyard, overseen by the Chamber of Commerce, so you know the listings are legitimate, and it’s safe to surf that website.

Visitma.com is the official site for the state of Massachusetts, with a subsection about Martha’s Vineyard.

The ferry will take you to either Vineyard Haven or Oak Bluffs.

Please know that Vineyard Haven and Tisbury are used interchangeably by locals.

West Tisbury is only known by that name.

Each ferry station has an information booth, and the Vineyard Haven location has the Chamber of Commerce nearby.

The Oak Bluffs Gingerbread Cottages are one of the “must-see” stops.

The Cottage Museum will give you a great glimpse of the history behind these unique buildings.

Some of the cottages are available for rent.

Oak Bluffs also has a beach that is among the most popular in the summer.

Oak Bluffs is also home to the Flying Horses Carousel, the oldest one still operating nationwide.

Edgartown might be the most popular city on the Vineyard.

This is the basis for the fictional city of Amity in the Jaws franchise.

The downtown is the quintessential New England setting, with boutiques, ice cream shops, and restaurants weaving along the way.

Edgartown also has a lighthouse open for seasonal tours with a popular surrounding beach.

Chappaquiddick Island is more remote, with some seaside views and a beach facing Nantucket in the distance.

West Tisbury is more rural, with a casual pace in this historic region.

The farmer’s market is not to be missed, and this small town has a great artsy vibe.

Chilmark is home to Martha’s Vineyard Sign Language, a communication used by the deaf and hearing impaired in the 18th century.

This was due to the many deaf people who once lived here.

For smaller crowds and fresh seafood, spend some time in Menemsha fishing village.

Aquinnah is on the exact opposite side of the island from Edgartown but should be added to your itinerary.

The brilliant coloring of the rocks mixed with the sea makes it a once-in-a-lifetime experience.

The beaches here are impressive, flanked by the rocky cliffs leading up to the lighthouse.

A village includes treasures honoring the native people of this island.

Places to Avoid in Martha’s Vineyard

If you’re worried about which city is safest, they all have great safety aspects, and there isn’t one that is more dangerous than another.

It’s really about what you want to do while you’re there.

If you want to be in the mix and enjoy social life while shopping and eating fresh lobster, Edgartown might be a better choice than Aquinnah.

For those who want to escape the crowds, head Up-Island.

Summer is the popular time to visit here, with May through September being the prime season.

This is when prices are the highest and crowds are their largest.

The population increases by 800% during summer.

Many businesses will close when the off-season kicks in, especially after the holidays.

You are more likely to find smaller businesses open as the larger places can’t make ends meet with the smaller crowds.

A beach near the Aquinnah lighthouse about 1/3 of a mile from the public entry point is historically a nude beach.

Attempts are being made to make this illegal, you’ll still run the risk of running into public nudity there.

It’s a well-sectioned-off part of the beach, but a beach stroll could quickly end up in a less-than-desirable location for children.

Hurricane season runs from June through November, and you should not be on the Vineyard if a storm is approaching.

Since ferries are required to get off and on the island, you could end up in a race against time with the storm churning your way.

A category 4 or 5 hurricane could do catastrophic damage to the island.

So... How Safe Is Martha’s Vineyard Really?

Martha’s Vineyard is a playground for upper-class residents and wealthy visitors.

Every city looks more like a Ralph Lauren ad than a tourist destination.

It’s easy to get swept up in the high-society vibe, but it’s also easy to stay safe using just basic safety precautions.

With the extensive police presence, hyper-vigilant community members, and businesses that thrive only in a safe environment, you shouldn’t have to put safety on your list of concerns.

You are more likely to bring your more expensive clothing, bags, and jewelry to fit in, so don’t go bragging about how much you paid for something – just to be safe.

The rough waters, beach hazards, and dangerous weather should be your main focal points.

Read the beach warning signs and follow the instructions of the lifeguards.

Don’t rent a boat if you aren’t skilled at navigating these waters.

Opt for a charter boat instead.

The Massachusetts government website has a whole section for Beach Water Quality where you can check for pollutants in the water and the potential dangers of certain seafood.

This island is safe enough for even the most famous people to have permanent or summer homes, and you’ll likely run into someone famous during your trip.

Please allow them the space to enjoy the island and resist the urge to ask for photos or autographs unless they appear open to them.

How Does Martha’s Vineyard Compare?