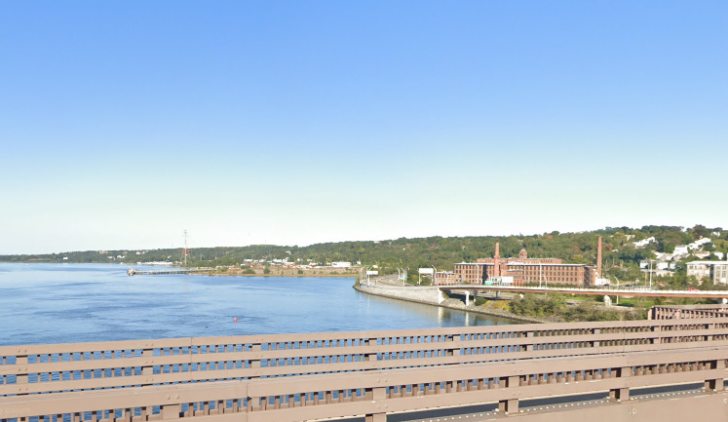 Fall River, Massachusetts, offers a vast array of experiences, from macabre to patriotic to exhilarating.

While you might only know the name from the tragedies that made headlines, there are still plenty of reasons to visit Fall River in 2023 and beyond.

Perhaps the most infamous true-crime story of all time happened here – surrounding the ax murders of two people with suspicious surrounding one victim’s daughter – Lizzie Borden.

Borden was eventually found not guilty, but suspicion reigns to this day and several places in the city lure curious visitors in to learn more.

In the late 1970s, a series of prostitute murders were allegedly connected to a satanic cult, one again making international headlines involving “Satanic Panic.”

If you’re thinking it sounds like a city so dangerous they should just burn it down and start over, that already happened in 1843 and again in 1928.

With a determined spirit, the city leaders rebuilt and harnessed the motto “We’ll Try.”

It took almost a century before a new motto was developed, “Make It Here.”

Now that we’ve addressed the elephants in the room, let’s talk about the brighter side of Fall River.

This was once a booming textile town, and several historical buildings stand to remember the legacy.

There’s a strong Portuguese influence on this immigrant town, and the great location makes it ideal for driving to the tourist resort town of Newport, Rhode Island.

Fall River is 20 minutes from Providence, Rhode Island, and just an hour from Boston.

Fall River has a medium risk, with violent crime rates twice the national average and an ongoing battle against drug use. The risk is more important for those looking to move to Fall River, but a tourist should be wise to some of the crime trends while exploring this unique area.

Southeastern Regional Transit Agency (SRTA) is the public bus system in Fall River, with nine other cities on the full route schedule. Taxis and rideshares are easy to find, and those ferries on the water can get you to some resort areas if you don't have a car. You should strongly consider getting your own rental car here for the most convenient access to this coastal region's unique towns and attractions.

This is a low risk, with none reported in 2021. Almost one car break-in per day happened in Fall River during 2021, so don't leave your car door unlocked and remove all valuables and personal items when you park.

Hurricanes and flooding pose the biggest risk. Hurricane season is from June through November, and while you'll get plenty of warning, you shouldn't risk trying to ride out a hurricane. This area is surrounded by water, and flooding or storm surges can happen easily. Winters can be intense with blizzards, heavy snowfall, ice storms, and more flooding risks. Fall River has its own Emergency Management Agency with a detailed action plan you can review online.

More than 80% of robberies in 2021 were person-to-person, and that's on top of an already higher-than-average robbery rate. While we will give this a medium risk, it's worth noting that most of those personal robberies involved drugs.

This is a low risk. Drug dealers are the true terrorists in this community, leading to much of the elevated crime rates. Terrorists are more likely to target larger cities like Boston or Providence.

Residential scams are most common here, and even the former Mayor is facing fraud charges to the tune of a nearly $900,000 fine. Three police officers were fired this year for criminal activity. You should use extra caution here in any interaction, as there seems to be a corrupt underbelly in some parts of the community.

Statistically, women are 8% more likely to be a victim of a violent crime. You need to avoid drug use, nightlife, or sketchy activities here, as there's a lot of trouble to find. Prostitution has long been an issue here. Even if you aren't participating in dangerous or illegal activities, being out at night is risky in this town.

The 2021 Water Quality Report shows nearly full compliance, but there was a lead violation. The challenge with lead pipes in any American community is that property owners are responsible for replacing them. It might be wise to use bottled water for drinking while you're here, especially if you're staying in a historical or old building. At a minimum, let the tap water run for two minutes before using it. Don't boil water that might have lead, as the process actually increases lead levels.

Fall River doesn’t have an official tourism website, but the city does have a section for visitors.

You can review some of the main attractions there.

Newport, Rhode Island, and New Bedford, Massachusetts, are two nearby tourist cities with their own websites for visitors.

The Historic Lizzie Borden House is a museum and a hotel.

The rooms where Lizzie and her sister Emma slept are available for guests, as well as the room where Lizzie’s stepmother, Abby Borden, was found brutally murdered.

Be warned that tours are ongoing throughout the day and night.

Virtual tours are available on the website if you want to get a sneak peek.

Anyone who books a Lizzie Borden ghost tour can also get 10% off tours to Boston Ghosts tour and Salem Ghost walk.

Fall River Historical Society and Museum offer a bigger picture of the town’s history, with a Lizzie Borden exhibit for those who are a little too creeped out to visit the home.

It is open from April through December when guided tours are offered hourly between 10:00 am and 2:00 pm.

You can take various tours, from basic museum tours to VIP experiences behind the scenes.

The cove has limited hours in the winter, but the full hours resume in March of every year.

The full tour is worth it, as you’ll see five ships and watercraft marked as Historical Landmarks.

Bicentennial Park is on the water and includes several different tributes to all branches of the military, including an Iwo Jima sculpture, the Korean War Veterans Memorial, and the Gold Star Families Memorial, among others.

The Children’s Museum of Greater Fall River offers indoor exhibits with fun for the whole family.

Exhibits range from outer space play areas to a dinosaur room, with educational opportunities around every turn.

It’s a great way to avoid a blustery winter day as well.

You’ll be able to visit the Borden Light Marine, but visiting the lighthouse is a whole different story.

The Lighthouse Keeper’s program allows people to stay overnight on the lighthouse in the middle of the bay.

It’s an opportunity so popular that as of late 2022, the lighthouse is booked through 2023.

Places to Avoid in Fall River

While Fall River isn’t dangerous like Chicago or Detroit, it does have similar risks.

It really doesn’t matter how big or small a city is if it’s being overrun by crime, right?

Fall River should be avoided at night, especially on foot.

Is it “too dangerous for tourists?”

However, you’ll feel uncomfortable at best at night, with the potential for prostitutes hitting on you at different locations or drug dealers trying to make a sale.

The Flint Neighborhood is particularly known for this type of activity, and despite the name “Pleasant Street,” there’s a risk among the businesses there as well.

A biker brawl happened in mid-2022, leaving six people stabbed and hundreds of people fighting in the street.

If you plan on being out at night, stay on the north side of the town, and avoid the waterfront and Flint neighborhood.

Google Maps still shows there’s a ferry from Fall River to Newport, but that service was shut down in 2021.

It’s unknown if it will return, but you’ll need to go to another city to get a ferry service.

Visit blockislandferry.com for the most current routes and ports.

This is not where the murders happened but where Borden and her sister lived out their lives after the trial.

This home is privately owned and not open for tours.

So... How Safe Is Fall River Really?

Fall River’s safety risks are more concerning for those who live here than those who visit here.

Robberies are most likely to be connected to drug crimes.

50% of aggravated assaults were connected to domestic issues.

Like much of America, Fall River also deals with the opioid crisis and resulting overdose deaths.

While the city has long struggled with drug abuse, 742 people overdosed in 2021, and 62 of those died.

It’s important to avoid street drugs, even if someone is offering what looks like a prescription drug.

Fentanyl is laced into many street drugs; just a small amount can kill the average-sized person.

The town is also dealing with the fallout of three officers being fired in 2022 for various incidents, from domestic violence to excessive force.

The former mayor, once the youngest mayor ever elected in Fall River, started serving a prison sentence for fraud and extortion in April 2022.

Even when the mayor’s criminal case forced a recall election, he was re-elected at the time.

You’ll see homeless people on the streets begging for money, and prostitutes are known to approach people outside gas stations and bars.

Your safety in Fall River greatly depends on your actions and avoidance of dangerous situations.

River Falls has a history of oddities and struggles, from the rhyme of “Lizzie Borden took an ax” to modern-day crime trends.

It’s a unique place worth visiting – during daylight.

If you’re looking for a safer city to stay in, check out our article on nearby Seekonk.

How Does Fall River Compare?