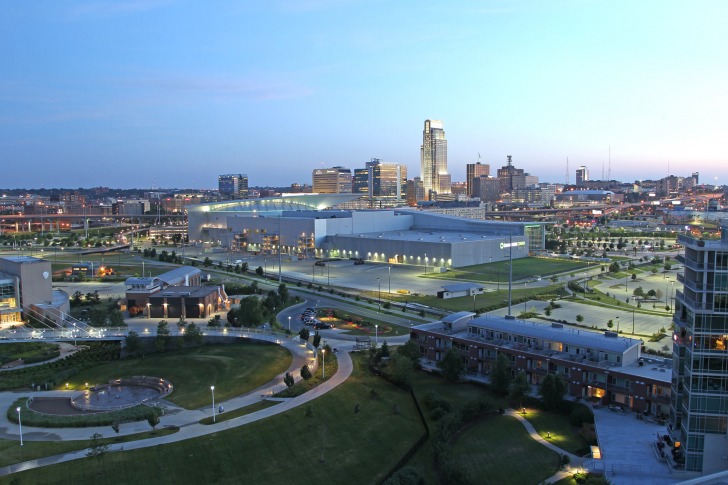 Omaha, Nebraska, offers Midwestern values – in its people and its prices – with big city opportunities, at least by Nebraska standards.

The biggest Nebraska city straddles the state’s east side along the Missouri River.

Iowa is just across the river, and you can actually stand in two places at once when you’re downtown.

While Nebraska is a big agricultural state, Omaha offers the best of the world.

You can dine high-end or eat fresh corn from a farmer’s market.

You could have the best steak of your life or make a Runza run for a bun full of uniqueness Nebraskans swear by.

Omaha has a way of making people fall in love with it.

Even billionaire mogul Warren Buffet lives in a neighborhood here in a modest home he’s owned for decades.

He could live anywhere in the world or buy his own island, and he chose the Dundee neighborhood of Omaha.

Local sports are a big deal in Omaha and across Nebraska, while most fans support the University of Lincoln Huskers.

The World Series for college baseball brings in major crowds each summer.

Then you’ve got fall filled with pumpkin patches and haunted houses, which gives way to community holiday events.

Omaha is a great place to visit any time of year.

Omaha Police Department didn't provide complete crime data for 2021 (nor did 40% of all law enforcement nationwide). We have enough data from 2021 and 2020 to piece together information, and I'll be clear about what information comes from what year. There's a low risk in Omaha, with some higher-risk neighborhoods and specific warnings we need to address. It's getting really close to medium risk.

Metro is the public transportation system here, with local bus routes and express services along the busy Dodge Street. You can easily call a taxi or book rideshares. Rental cars are available too. There's low risk with any option, but having a car would be ideal.

As someone who visits Omaha often, I was surprised to see there is a medium risk of being pickpocketed or having a purse snatched. 5% of all thefts in 2020 were due to pickpocketing or purse snatching. I spend most of my time in central or west Omaha, and I never worry about this, but the downtown area has greater incidents.

The medium risk here comes from various weather events that can be severe throughout the year. Tornadoes and severe thunderstorms are the biggest threat when it's warm, with spring being the peak of the severe weather season. Winters can be cold and snowy or mild and dry. In 2020, eastern Nebraska recorded a foot and a half of snow in a 24-hour period. The next year, the city hardly got any snow. You just have to be prepared for everything here. Oh, and it's very windy in Nebraska, which is annoying at best and fuels wildfires at worst.

The robbery risk is just below the national average. With the violent crime rate being 30% higher than the national average, treat this with low risk, but don't let your guard down. Never fight back against an armed robber. Criminals here aren't afraid to turn a robbery into an aggravated assault.

The size of the city isn't the biggest factor, but it's the presence of Offut Air Force Base and the central distribution and transportation location of the city that leads to medium risk. There is a lot of law enforcement presence from all levels of the government to address any safety concerns related to terrorism.

Nebraskans are nice people and can be too easy to take advantage of, but tourists are unlikely to face the common scams. The locals are the main targets, with utility and law enforcement scams or the ongoing "Grandparent Scam," where scammers call elderly people posing as a grandchild in desperate need of help.

The sexual assault rate is bordering on double the national average. While the western side of the city is more suburban, use extra caution when enjoying the nightlife downtown. Don't walk around the river or downtown at night by yourself.

Tap water meets all required standards and is safe to use for drinking and bathing. A child's death from a river amoeba caused outrage and concern about water quality, but the water utility for Douglas County assures us that it has nothing to do with tap water quality.

Safest Places to Visit in Omaha

VisitOmaha.com is the official website of the tourism bureau.

You can sign up for the Omaha Savings Pack on that website, and you’ll get a free water bottle too.

I wouldn’t be a good Nebraskan if I didn’t talk about the Henry Doorly Zoo and Aquarium.

While every community loves its zoo, this one gets national and global accolades.

Touting the world’s largest indoor desert and rainforest, the zoo offers a swamp, a canyon, and caves.

Yeah, there are animals too.

VIP experiences include penguin and/or shark feeding and behind-the-scenes tours.

Be sure to book your special adventure at least three weeks in advance.

Want to see more animals in a less crowded setting?

You’ll be surrounded by farm animals and uniquely able people helping make the animals’ lives better after being neglected or abused.

Down at the riverfront, you’ll find several attractions and event spaces.

The Heartland of America Park is expected to open in 2023 with a slew of attractions and historical spots.

Even if you visit before 2023, you’ll find green spaces, events, and the stunning Bob Kerry Pedestrian Bridge.

(Just called it the “Bob.” Everyone else does.)

You can walk across the bridge to Iowa and Tom Hanafan Park or just take in the sweeping views of the river and Omaha skyline.

I know when I first saw Omaha, I was surprised by how dynamic the skyline was.

The Old Market District is the new hot spot.

This historical area has been turned into an entertainment hub that’s lively both day and night.

Walk the cobblestone streets while you sip coffee and explore unique stores, or get dressed up for a night on the town and bar hop between urban and eclectic options.

There’s a brilliant garden display there too.

Civil rights activist Malcolm X was also born in Omaha, and his birthsite is commemorated with a memorial and a plaza.

Walk in the footsteps of Lewis and Clark at the Historic Trail Visitor Center.

Long before Warren Buffet parked his billions here, the Joslyn family built a castle and called it home.

The Joslyn Castle is open for tours, but check the website for dates and private events scheduled.

Places to Avoid in Omaha

The east side of the side, east of 52nd Street approximately, is where the crime rates start to go up.

There are pockets of downtown and the riverfront where the rates take a dip.

You should always stay in the designated entertainment and public areas.

Ask five people about the safety of the Old Market, and you’ll get five different answers.

There’s no denying the history of the Old Market, and there’s a lot to see and do for every interest and age.

There are homeless people here.

At times, you might see a lot of them.

You might even see people leaving food for them (which is going to attract more homeless people).

Police are going to issue tickets if you’re parked illegally, and you might run into drunk people or even some criminals.

I think people forget that Omaha is a big city, and that will come with crimes.

Stay aware of your surroundings, walk with a trusted buddy, and don’t start fights.

Safety Tips for Traveling to Omaha

So... How Safe Is Omaha Really?

Again, the west side is still in the city limits but is much more suburban and soccer moms driving their minivans to Target.

The closer you get to downtown, the more you’ll see crime rates going up and neighborhoods getting denser as Suburbia gives way to urban landscapes.

The only crime category of most importance to tourists that is lower than national averages is robbery, and that’s just lower by one point.

This nice Midwestern city in the Heartland has some grit to it.

An average of eight cars a day are stolen, and 32% of those robberies happen in public places, according to 2020 data.

One of the challenges with answering “Is Omaha Safe?” is that the police department doesn’t give specifics.

For example, I can tell you the theft rate is 60% higher than the national average, but I can’t tell you how many of those are pickpockets in 2021.

I can only use 2020 data, which was during the pandemic.

The 2021 data doesn’t show how many robberies were in public places, but I can tell you robberies are up 1% year-to-date as of August 2022.

This is why it’s important to review the quarterly reports on the department’s website.

You can have a safe trip to Omaha as long as you don’t assume “Nebraska Nice” applies to everyone.

In any city with half a million people, you need to watch your back and practice basic safety standards.

How Does Omaha Compare?