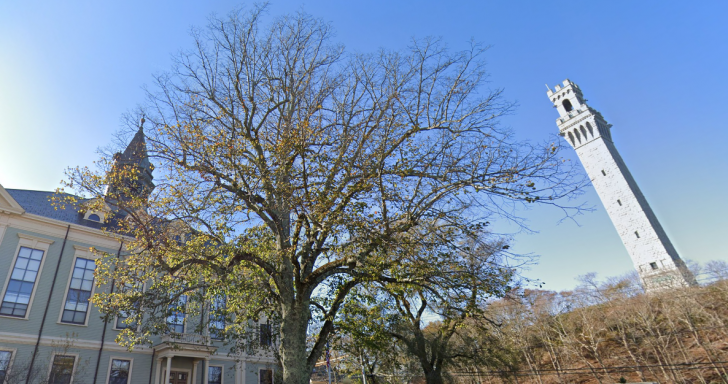 Provincetown, Massachusetts is at the “fist” or the flexed-arm shape of Cape Cod.

It’s a town known for an LGBTQ+ inclusive community, but it’s welcoming to everyone with family-friendly activities and risqué retreats.

P-Town, as it’s called, is a place where you can party the night away or escape to sandy beaches while still enjoying the unique landscape of the Cape.

Despite the woven similarities in Cape Cod communities, P-Town is truly a unique place among all the other coastal cities.

I researched Provincetown before I went to bed last night, and I had dreams of cabarets, serial killers, American Horror Story, COVID outbreaks, pilgrims, lobster roll sandwiches are big as my head, and giant whales swimming among shipwrecks.

The truth is – each one of those has a place in Provincetown’s history and present.

Fans of American Horror Story will recognize dozens of locations in this coastal community.

Self-guided tours are available and if you time it right, you might be here during filming for an upcoming season.

Headlines were made in late 2022 when nearly 50 years after The Lady of the Dunes was found murdered, she was finally identified.

A serial killer once walked these streets, leaving a bad legacy in both P-Town and nearby Truro.

Despite the True Crime stories that live among the seagrass and flamboyant main road, this is a very safe community that provides a much-needed vacation escape for those living alternative lifestyles to be themselves and let loose.

It’s surrounded by water on three sides, with ferries available to and form Boston to avoid the long trip to the tip of the Cape.

P-Town is truly a place of mystery, magic, and the mixing of different people to create a truly unique multicultural destination.

The only thing not welcome here are the sharks, but we’ll talk about how to avoid them.

Several ferry options depart from Boston to Provincetown and back, from luxury rides with small crowds to larger ferries with basic amenities. Once you're in P-Town, you can use the Cape Cod Regional Transit Authority buses to explore the Cape. Rental cars are available, but parking is pain in P-Town. Bicycle rentals are available and taxis and rideshares are plentiful. The CapeFLYER bus leaves Boston and ends in Hyannis, but then you'd need to take the bus or rent a car to drive nearly 50 miles of traffic-heavy two-lane road. A summer trolley takes tourists around P-Town.

Just one pickpocket was reported in 2021, but that was the first one since 2018. There's a low risk but a high potential. Only put in your purse or wallet the things you need for any given day and don't leave bags out of sight. The highest theft category was bicycles, so never leave a bike unlocked.

Provincetown gets a slew of weather risks throughout the year, so we have to give this a medium risk. All risks come with plenty of warning, but you shouldn't ignore the precautionary measures requested. Hurricanes are the biggest risk from June through November, and nor'easters can also cause problems from October through May. Winter storms can cause many issues, while extreme heat and cold should also be considered when packing for your seasonal trip.

Just three robberies have been reported since 2011, giving this a very low risk. Robbery rates are low across the Cape. Don't take that as a reason to let your guard down. The P-Town streets can be rowdy at night and into the overnight hours, so always make situational awareness a priority.

The risk here is low, as even at peak population, it's too small of a crowd to get the attention of a terror group. Hate crimes would be the one caution, and even in the most recent Terrorism Threat to the United States alert, targets of potential violence include the LGBTQ+ community. You can sign up for emails as new bulletins are issued at the website of Homeland Security.

Provincetown police have repeatedly warned of rental scams, and it's getting worse as housing on the Cape becomes more expensive. Craigslist and VRBO have each been connected to scams where a fake listing gets posted at a "great price." The victims even go as far as to sign a rental agreement before being instructed to wire funds. When they arrive in P-Town, the property doesn't exist and that money is lost forever. Use ptownchamber.com to find rental listings, as those businesses all support tourism and won't scam you out of your money. Be prepared to pay high rates, especially when visiting during the summer or the popular Bear Week, which brings a lot of LGBTQ+ people to the peninsula.

This community is welcoming of women, and many places cater to lesbians and transgendered people. Serene spaces and outdoor opportunities offer respite from busy lifestyles, but you should study beach, water, and wilderness safety, especially if you are traveling solo.

The Provincetown Water Department does more than 1,000 water quality tests throughout the year, checking for 120 potential contaminants. The summary of the report and where tap water comes from is in the 2021 Water Quality Report, but I can confirm no violations were reported, and all standards were met or exceeded.

Safest Places to Visit in Provincetown

The Provincetown Chamber of Commerce website is one of the best cyber-safe places to research the town.

Ptowntourism.com is another robust site, provided by the Provincetown Office of Tourism.

VisitCapeCod.com will take you to a secure website with a list of each Cape city and things to do, places to stay, and local eateries.

Let’s start at the tip of the peninsula and work our way through the town.

P-Town has two lighthouses here that swoop off the end of the peninsula like a comma.

The Wood End Lighthouse and Long Points Station Lighthouse at the epitome of the New England lighthouse, complete with sand dunes and water views on all but one side.

To get there, you’ll either walk the Breakwater Walk which is as close as you’ll ever get to walking on water.

The boulder-lined breakwater (which is called the causeway on Google Maps) runs a mile to the secluded island with the lighthouses.

Neither lighthouse is open for tours, but you’ll quickly fill up an Instagram page with photos.

If your tired legs make it all the way to the Long Point Lighthouse, you’ll dread the return trip back.

However, you can take a ferry back to P-Town.

Tours are open throughout the year, with the weather being the only cancelation risk.

Back at the entrance to the Breakwater, you’ll need to look closely to find the small Pilgrims’ First Landing Park.

This might ruin everything you knew about American history because the Pilgrims on the Mayflower landed here first before heading to Plymouth a month later.

There’s not much here but a commemorative plaque, but it’s still worth a few minutes of your time.

You can take a ferry between Provincetown and Plymouth if you want to learn more about the first landing sites in 1620.

Check out our article, “How Safe Is Plymouth for Travel?” to learn more about that city.

Each tour service will have its own rules and regulations for visitors, so review their website and pricing before making a choice.

Commercial Street is the main street of P-Town, with stores, restaurants, bars, and nightclubs stretching along the narrow street.

Be advised, this street is narrower than even New Orleans streets, with one-way traffic and some parts with sidewalks only on one side.

The Race Point Lighthouse is on the farthest western point of the peninsula.

This one is open for tours two Saturdays a month from June through October.

To get here, you’ll need an Off-Road Vehicle with a permit to drive on the sand or have a hefty walk on the beach ahead of you.

While the Cape Cod National Seashore stretches the length of the Outer Cape, Provincetown has one of the two visitor centers.

Stop by the Province Lands Visitor Center to ask park rangers for safety advice, get updated maps, and watch some short films about the history on this nationally-protected land.

It’s open from May through October.

Places to Avoid in Provincetown

Crime isn’t a concern here, so you won’t run into bad neighborhoods to parts of the community where you won’t be welcome.

Well, except for private property.

People pay a premium to live in this heavenly destination.

Respect their gates, fences, and backyards.

I debated if the Breakwater Walk should be in this section or the previous one, but I decided to split them up.

Here’s why – the breakwater is a truly unique experience, but it also starts with a walk that’s more than a mile on uneven giant boulders.

People have shattered ankles and torn ACLs on slippery rocks or after being pelted by a wave.

You need to avoid crossing as the tide is rising, or you could end up trapped until the next low tide or walk all the way to Long Point Beach for the ferry.

At high tide, there are part of the breakwater covered by water for long distances.

In the summer of 2022, a woman tried to cross at high tide and was swept out to sea, but thankfully, the Coat Guard rescued her.

This is not a good adventure for those with mobility issues or health issues resulting from overexertion.

Safety Tips for Traveling to Provincetown

So... How Safe Is Provincetown Really?

Provincetown might have one of the higher crime rates than in other Cape Cod cities, but as we discussed above, that’s more because of the skewed way data is configured for “per 100,000 people” and doesn’t take into account the tourist crowds.

You will find more eclectic and party vibes here than in other cities, with Hyannis being the next closest place to “let loose and party.”

Since P-Town is so inclusive, you’ll see people expressing themselves and their sexuality.

Crowds can be rowdy at times and there’s a flamboyant undertone throughout Commercial Street.

It’s not a safety issue, but it’s just something to be aware of and there shouldn’t be concern about children in this environment since the nightclubs and more titillating activities happen long after they’ve gone to bed.

I mentioned earlier the serial killer that once lived here.

Tony Costa was known as the Cape Cod Vampire after killing and mutilating (at least) four women in P-Town and Truro back in the 60s.

Two books have recently been written about the murders, but authors who scheduled book tours in Provincetown were met with threats and aggressive messages causing both book tours to be canceled.

People in P-Town don’t like to talk about Costa, do don’t bring him up.

The water risks here aren’t to be taken lightly, from the Breakwater Walk to shark risks to storm damage potential.

The beauty of Provincetown is everything that makes the Cape great, with heightened acceptance and support for those who can’t always find those safe spaces in their hometowns.

How Does Provincetown Compare?