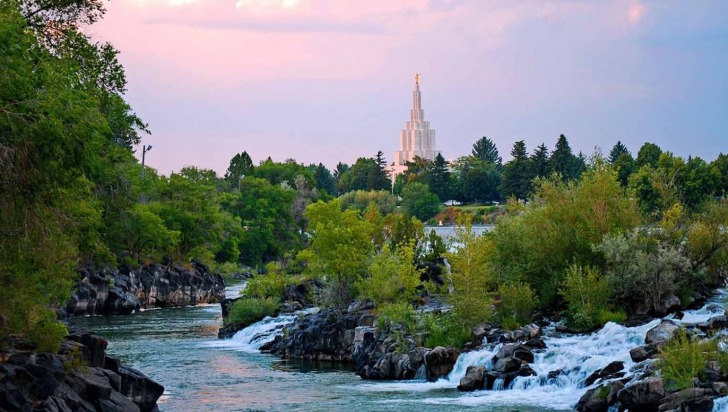 There are a lot of cities with the name “Falls” in them across Idaho, and here we’re going to talk about Idaho Falls.

There’s a good chance if you are visiting Idaho Falls, it’s on the way to or from Yellowstone National Park, which is just about an hour away.

It’s easy with the lure of Yellowstone to move quickly through Idaho Falls, but you’d be missing a lot if you treat it like a pitstop instead of an adventure all its own.

The downtown area is filled with historic buildings and artifacts so abundant there’s even a scavenger hunt to play when visiting.

The namesake river and its associated falls go right through the city and it’s a great experience to walk the river during any season.

There’s a safe riverwalk to guide you along.

While there’s plenty of wildlife in the surrounding areas, there’s also a zoo there where you’ll never end up running from an angry moose.

(Yes, that’s a thing and we’ll talk about that in a bit.)

With a rugged exterior and a lot of outdoor amenities, we mustn’t miss the incredible growing arts scene in Idaho Falls as well.

There are just a lot of ways to fall in love with “The Falls.”

There's a low overall risk here. Even though some of the crime numbers are actually higher than the state average, there's interesting information when we dig into that. As a tourist, you should have low overall concerns about crime.

There is a public transit system called the Downtowner that is like a mixture of a shuttle bus and a rideshare program. As of mid-2022, the program was expected to launch "soon." There is no other bus system in the city and you'll have to get a taxi or rideshare to get around, which aren't all that abundant here. Having your own car is ideal in Idaho Falls.

There were four pickpockets reported in 2020, each with a loss of less than $120. While there's a low risk in Idaho Falls, these are great examples of not carrying too much around in your wallet in case you are a rare victim.

You've got a medium risk here between the bitter cold and snowy winters, wildfires, earthquakes, and flash flooding. It's important your research the terrain and weather emergencies here before you go so you are prepared in case of an evacuation.

A third of the robberies that happened in 2020 were in public places. There were only 18 robberies total. There is a low risk of a mugging happening here, but if it does, it's best to not fight back as many people in Idaho are legally armed. It's not worth risking your life for your belongings.

There's a medium risk here with the Idaho National Laboratory being just north of Idaho Falls. This is where nuclear research for everything from energy to national security is researched and tested and has been known as "The Site" since the 1940s.

The biggest scams here are the utility scams that target customers, not tourists. There's a low risk of a tourist scam, but if you are suspicious at all about a rental home or a specific situation you come across, report it to the police.

The sexual assault rate is higher than the national average but almost double, but that's really the only sticking point I see that would give a woman a higher risk here. As long as you use caution when drinking and avoid going anywhere private with strangers, you should have a low risk. It's also wise to avoid walking around town at night by yourself.

There is a low risk as the water quality tested in 2020 meets or exceeds all requirements. New water quality reports come out by June 1 of each year, so it's a good idea to review the report before you go.

You certainly can’t come to Idaho Falls without visiting the actual falls along the Snake River in the center of town.

Stop by the Japanese Friendship Garden on your stroll.

No reservations or admission are required for the garden visit.

Downtown Idaho Falls isn’t as rustic and charming as some other downtowns, but there is plenty to find if you get a copy of the scavenger hunt map.

You can use that map for discounted admission to the Museum of Idaho where there’s a lot more history to learn.

The Idaho Falls Zoo is known as the “Best Little Zoo in the West.”

The exhibits are laid out by continent with interactive exhibits and live animals to see.

There is also a children’s zoo on site where you can interact with animals like a Nigerian Dwarf Goat or Sardinian Donkey.

Another great place for the whole family is the ARTitorium, which is an interactive and educational showcase of art.

This art comes in all forms, including a digital motion wall where you design yourself into a human kaleidoscope.

There are hands-on exhibits and screen adventures to create stop motion graphics or compose your own symphony.

If you want to visit the Idaho National Laboratory, call ahead first.

They moved to virtual tours only since the pandemic.

At some point, those tours are expected to return but haven’t as of mid-2022.

It would be a great experience to see the world’s first nuclear power plant.

You can email tours@inl.gov to ask about tours.

Places to Avoid in Idaho Falls

The area in the center of town from I-15 to the Yellowstone Highway is shown on crime maps to have the highest rate of incidents.

This is also one of the busiest parts of the city, so that’s not really a surprise.

There are a lot of shoplifting arrests in Idaho Falls. In fact, 70% of the 704 thefts were shoplifting-related.

You should report any shoplifting you see but avoid confronting the person directly.

Idaho is known to have really nice people who are a little wary of strangers.

That only got more complicated when a bunch of people from California moved to Idaho during the pandemic to enjoy the outdoor life with the revelation they can now work from anywhere.

The “Californication” of Idaho has gobbled up real estate, sent prices soaring, and added more traffic to the road (with those terrible California driving habits).

Avoid talking to any locals about this as it might set them off on a diatribe of why they don’t want any more people moving here.

This is also a state with a strong conservative base and very religious people.

You’ll see the pristine white Mormon church on the horizon.

Follow basic rules of etiquette, don’t talk politics or religion with people as it could lead to a heated argument and who wants that on vacation??

So... How Safe Is Idaho Falls Really?

It doesn’t look all that safe when you look at the crime numbers, but let’s break that down a little bit.

The violent crime risk is one in 329 by the statistics alone.

52 of those crimes were against strangers, so that’s just 16%.

Almost 50% of the violent crimes happened in homes, which wouldn’t impact a tourist unless you were visiting family or attending a party at a house.

The theft rate is lower than the national average just by the statistics with a risk of one in 99 for the average person.

However, when we take away all the shoplifting reports, the risk goes down to one in 334.

The city hasn’t had more than two homicides in a year since 2012.

This is an open carry state, so you might see more people with guns than in some other places, but most of the time it’s completely legal.

Risks do come from the great outdoors as well, with bitterly cold temperatures in the winter and scorching heat in the summer.

It’s a dry climate, so some people forget to bring enough water to keep the body hydrated.

Of all the wildlife in Idaho, moose are the least intimidating to tourists but also among the most dangerous.

If you get too close to a moose, it will charge and could try to stomp you to death.

If you are a person who generally practices good personal safety habits, you should have no risk and all rewards visiting Idaho Falls.

How Does Idaho Falls Compare?