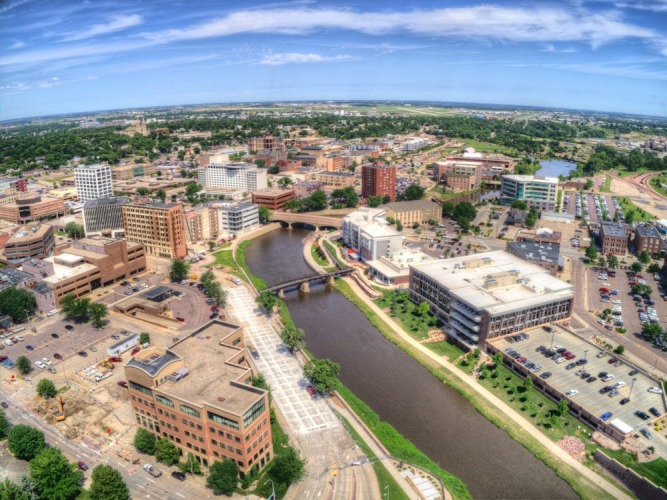 Sioux Falls, South Dakota, is the largest city in the state and is named after the downtown waterfalls that are 14,000 years old.

This is considered the “big city” to most people in South Dakota, but it’s also close to the country’s oldest known human-inhabited wilderness area.

We should clarify here because, for those not too familiar with the Midwest, you might run into name confusion.

Whatever you do, don’t say Sioux City when you mean Sioux Falls.

There’s a healthy rivalry between the two. Just ask someone – they’ll tell you, you betcha.

You might wonder, “Does it really get THAT cold in Sioux Falls in the winter?”

However, these thick-skinned outdoor lovers don’t let that keep them from winter sports.

There’s a good chance if you’re looking for a trip to Sioux Falls, it’s for fishing or hunting.

This is a great place to do both, with a welcoming committee at the airport for the start of each hunting season.

In many ways, Sioux Falls is nothing you’d expect, yet everything you’d hope for in a getaway.

There's a low risk here with crime trends actually going down at a time when some other cities are seeing historical highs. While there are still above-average rates in some key areas, it's definitely not among the more dangerous cities in America. Sioux Falls is also one of the top cities for young professionals.

Sioux Area Metro is the public transportation system here with a fixed-route bus service. You're more likely to use the downtown trolley that has stops at the main attractions and entertainment districts. Taxis and rideshares are available, but you can also get your own rental car if you want.

This is a low risk, with 16 pickpockets or snatched purses reported in 2021. While the theft rate is twice the national average, 40% of those are due to car break-ins. We have special advice for those renting a car here, but that's coming a little later in this article.

You need to treat this with a medium risk throughout the year, but there are emergency management plans for every risk. Severe weather can bring tornadoes with heightened concern in the spring. In September 2019, the city was hit by three back-to-back tornadoes. Winter can bring blizzards and ice storms, with incredibly cold temperatures. Wildfires are also a risk, especially in this wind-prone area. Oh! Flooding too. Yeah, there's a lot that can go wrong here, but nothing that is too surprising for this part of the country.

The robbery rate is actually slightly lower than the national average, a statistic so odd I double-checked it to be sure. On top of that, just 23% of those were robberies against individuals in public places. Don't let your guard down, but it's a nice sigh of relief not to have to be on high alert.

While terror attacks can happen anywhere at any time, it's really not something to worry about in Sioux Falls. A place like Mount Rushmore on the other side of the state is more of a notable attraction to be a potential target.

One scam you'll need a heads up about is when someone approaches you, claiming to be down on their luck. They'll try to sell you pieces of expensive jewelry at a deep discount because they need to "feed their family" or some other sob story. In the end, the jewelry is fake. Don't even listen to the pitch from the scammer because this con has already turned into a fight that required police attention.

Statistically, women are slightly more likely than men to be a victim of a violent crime, but with more than half of violent crimes happening at home, it's likely a domestic issue. You should use standard safety precautions as you would in any city and be sure to prepare for the winters here. Don't worry about fashion over function.

The city lacks the traditional Water Quality Report on its website but confirms that the water is safe to drink and passes all standards. The water is hard, so you might notice some deposits left behind of minerals in ice trays or cups. The Water Division has an FAQ section on the city's website where you can find as much safety information as possible - well, everything but the Consumer Confidence Water Quality Report.

ExperienceSiouxFalls.com is the official tourism website for this area.

This would be a good time to make sure you pronounce the city correctly – It’s “Sue Falls.”

This area is also known as Siouxland (“Sue land”).

I mean, we have to start at Falls Park, right?

This is where the impressive cascade of falls comes from the Big Sioux River.

With a total drop of 100 feet, that process happens in tiers.

The stair-step look of the falls is downright majestic at times.

During the holidays, the park is lit up in Christmas colors.

The visitor’s center is located inside a five-story observation tower in Falls Park.

You can also stop here for a seasonal farmer’s market.

Don’t miss the Stockyards Ag Experience at the park to learn about the agricultural history and modern importance of this area.

All of that is free!

Just south of Falls Park, check out the Arc of Dreams.

It’s a steel arch spanning the river, but there’s a gap at the top.

This symbolizes the leap of faith we must take to chase our dreams.

The Great Plains Zoo & Museum of Natural History are both in the same location, with extensive varieties of live and preserved animals between the two.

Check the calendar during your visit because there are really cool events throughout the year, like zoo campfire stories, farm feedings, and special holiday-themed nights.

Winter won’t be outdone at Catfish Bay because that’s when Ice Fish Fest happens with awards for the anglers who catch the biggest fish.

The newest park in Sioux Falls is also one of the oldest known places where humans lived in the United States (long before it was anything more than the North American continent)!

You can visit Good Earth at Blood Run throughout the year but stop at the visitor’s center to learn about the history of the land dating back to 1300 AD.

Places to Avoid in Sioux Falls

You can travel freely throughout the city without worrying about entering a dangerous neighborhood.

There are a handful of sketchy streets here and there, but even people from small or medium-sized cities won’t feel intimidated.

Of course, you need to avoid letting your guard down too much because there’s always a risk of some kind.

Avoid leaving your car unlocked or your keys in your car.

This is one of the stupidest things I have ever written, but every city has the same issue – car theft fueled by people who leave their keys, guns, and technology in the car with the doors unlocked or the windows rolled down.

There are an average of three car thefts here a day, and the rising numbers are all due to people not taking basic safety steps with their own property.

This is not the same thing as the 1880 Town on the west side of the state.

I’m not telling you to avoid Buffalo Ridge – I’m just saying it’s kind of creepy, and after reviewing it, I can say with utmost certainty I wouldn’t go there.

There are no people there, just worn-down life-sized robots depicting an old Western town.

It looks like a place Rob Zombie would shoot a movie if you are familiar with his work.

So... How Safe Is Sioux Falls Really?

In fact, the most dangerous crime categories were down in 2021.

Drug crimes did go up, and car thefts were spiking.

Police Chief Jon Thum stated in the 2021 Annual Police Report, “The continued growth of Sioux Falls and the metro area presents both challenges and opportunities for our department, but despite the growth in population and calls for service, our property and violent crime rates per 1,000 residents remained relatively stable.”

Street racing is also a problem here, with more than 100 tickets being handed out in one weekend of traffic enforcement.

The area near 57th and Ellis is known for street racing, and residents complained about the noise and dangers on the road.

I checked, and those locations are fairly rural, with no hotels nearby.

Only 15% of the violent crimes in 2021 were against strangers, and more than half of all violent crime is among people who know each other in private residences.

40% of all thefts were car break-ins, but it’s easy to avoid being a victim of that crime if you just use common safety steps.

The weather here is another risk that you shouldn’t take lightly.

Winter wind chills can easily get below 0°(F), and spring can bring disastrous and powerful tornadoes.

The winds here are very consistent, which could also increase the wildfire risk.

How Does Sioux Falls Compare?