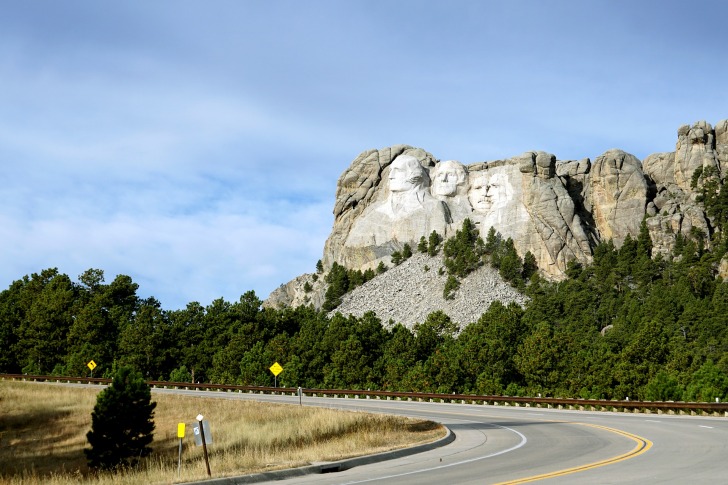 South Dakota is a land of natural wonders and traditionally has been an agricultural state.

In recent years, it has attracted more tourists.

It is most famous for Mt. Rushmore, the huge carvings of four presidents.

Wind Cave National Park is one of the most complex and largest caves in the world.

Badlands National Park has one of the world’s largest fossil beds.

Crazy Horse Memorial is a carving on a mountain that has been in the works for a long time.

The town of Deadwood is famous for being an old west town and is a national historical landmark.

It has the fifth lowest population density in the nation at 46 people per square mile.

Winters are very cold and harsh, summers are pleasant.

The state has had a 25 percent increase in overall crime in the last couple of years, but it is still mostly safe. In a national survey, 74 percent of the state's residents said they felt safe, seventh-best in the nation. Basic safety precautions you would take anywhere should keep you safe in South Dakota.

We say medium because of the lack of public transportation. It does not exist in rural areas and it is not plentiful in larger towns. What there is, is safe, but finding it is the problem. Taxis are licensed and will take you from the airport to your hotel, but for travel, you are better off renting a car.

This crime is fading as people carry less cash and credit cards are harder to hack. There might be a few of these types of crimes in tourist areas, but they are rare. There are few crowded areas in South Dakota, and that is where this type of crime happens.

There are a lot of mountains in this state, and there is a risk of earthquakes. Weather is a bigger concern, with tornados in spring and summer. The winters can have a lot of snow and ice, making travel difficult if not impossible. You are more likely to be in danger from nature than you are from other people in almost all of the state.

South Dakota ranks low in this type of crime. There are some areas where it is more likely, but it does not happen often. Most theft crimes are when items that are not secured are stolen. Property crime is a bigger concern than being mugged.

International terrorists are not likely to hit a state as sparsely populated as South Dakota. There has been growing concern about domestic terrorism from extremist groups but there have not been many incidents.

Most scamps target elderly residents where there is attempted identity theft. Most scams are electronic, either telephone or Internet-based. Scams on the street are rare, but keep in mind that any deal that seems too good to be true is usually not true.

Women travelers are common in South Dakota and there is no more risk than there is for men. Even women traveling alone are safe. There are some rapes reported, so even though it is safe, don't go into strange areas at night alone. Also, do not take drinks from strangers in bars.

Water is plentiful in South Dakota. Cities and towns provide excellent water in safe environments. There is no reason to be concerned about the water in this state. Health officials still recommend not drinking from streams or rivers.

The safest places in South Dakota for travelers would be the national parks, like Mount Rushmore, Cave Wind, and Badlands national parks.

The greater dangers in these places are dangers from nature.

The many small towns around the state are very safe as well.

The 10 safest towns, all small, combined had no murders and only one robbery last year.

The safest small towns include Brandon, Lead, Sisseton, and Madison.

There are not very many, if any, unsafe areas.

Crime is often a matter of opportunity.

Rural areas where there are not a lot of people have the lowest amount of crime.

These areas might have more danger from mother nature than other human beings.

Places to Avoid in South Dakota

Aberdeen, with a population of 28,000, is one of the most dangerous cities in the state.

Mitchell has the highest crime rate.

The second-largest city in the state, Rapid City, with 75,000 people, had 492 violent crimes last year.

There were 99 rapes and 326 aggravated assaults in that city last year.

Sioux Falls is the largest city in the state and has the sixth-highest crime rate.

There were 121 rapes and 107 robberies there last year.

Still, it is a safe city for the most part.

Some high-crime areas are very small.

Ask local people about specific places to avoid, but most areas of the state are safe.

The most common crimes are property crimes.

These happen when things are not locked up, and no location is worse than any other location.

So... How Safe Is South Dakota Really?

South Dakota is an example of how statistics can be misleading.

With a small and sparse population, crimes per 1000 make it seem worse than it is.

According to one government agency, South Dakota has the eighth-most violent crime per 100,000 people in the nation, at 501.

There were 40 murders and 27,000 violent crimes, both among the fewest in the nation.

When property crimes are added, the state is in the bottom third nationally.

Another survey showed only 28 percent of the state’s residents felt concerned about violent crime, which was among the lowest in the nation.

Seventy-three percent of state residents felt safe in their home, the seventh-best in the nation.

At the same time, 15 percent of residents had experienced violent crime, which was among the highest in the nation.

Most of the state is rural, and a lot of it is within national and state parks.

In those areas, there could be some natural dangers such as wild animals, or sudden weather changes.

There are not many big cities and no huge ones, and that is where the most danger lies from criminal activity.

The rural nature of the state results in fewer crimes being committed, but there is a higher percentage of crime per 1000 people.

The poverty rate is relatively low and that too tends to decrease the amount of crime.

The bottom line for South Dakota is that most residents feel safe, and are not very worried about violent or property crimes.

With basic safety measures in place, you should not have problems.

How Does South Dakota Compare?