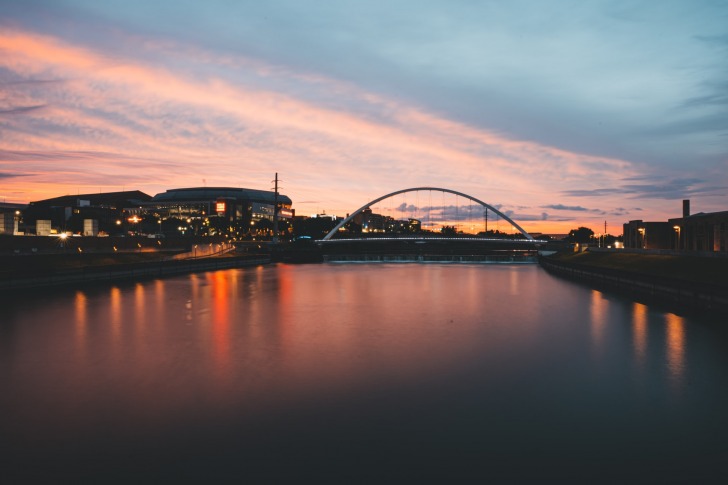 Iowa is one of the safest states in the nation for travel.

It is largely rural, and even the big cities are not all that big.

There are miles of rolling hills covered with corn and wheat, and there are a lot of interesting sites along the way.

The Mississippi River flows on the eastern border, and that makes for interesting travel too.

Even though it is a largely flat farming state, there are a lot of beautiful state parks and wilderness to explore.

Iowa is the heartland of America, so you get a real taste of what the countryside is like here.

There is plenty of history of the settlement of America as well.

It may not have the lights and excitement of some places, but it has all the charm you could possibly want.

Iowa is a great place for a peaceful and relaxing vacation.

The problem with public transportation in Iowa is the lack of it, more than any danger involved. Bigger cities have buses that are user-friendly. There are a few trains, and some bus lines have routes between cities. Like much of rural America, there is not a lot of public transportation available.

Pickpockets are rare in Iowa. Most property crime is based on opportunity. A car or motel room left unlocked might provide a petty criminal with an opportunity, and they might steal what they can.

There are not a lot of natural disasters here, but the weather can provide some treacherous situations. Tornadoes are common during the spring storm season. Flooding can happen at times along rivers, and there is a lot of snow in winter. Natural disasters can happen, but with planning, they can be mostly avoided.

In downtown Des Moines there is a little more crime than in other places. Muggings are relatively rare. They happen in the larger cities, and normally only happen when people are in an unsafe area alone.

Terrorism is virtually unheard of in Iowa. It is too rural, and terrorists are not in the habit of attacking rural areas where there are not a lot of people.

Iowa is not a well-known tourist area, and that cuts down on scams to some degree. The biggest risk would be auto repair shops that might try to make unneeded repairs on your car. There might be some shop owners who would try to take advantage of international travelers not familiar with the currency, but those are too rare.

Women are known to travel alone in Iowa without any issues. Only in larger cities is there any danger, and then only if you are in a bad part of town alone. In most areas frequented by tourists, a woman traveling, even alone, would not get much attention.

Even small towns have sound water systems, so the tap water is fine. The water is not hard, so it tastes good. In Iowa, you are just as good at drinking tap water as you are buying bottled water.

Safest Places to Visit in Iowa

The safest places would be rural areas, state parks, or areas where there are not a lot of people.

Places like Dubuque and Davenport, along the Mississippi River, are great little tourist towns that are very safe for travelers.

Iowa has the second-lowest crime rate in the Midwest, with 303 violent crimes per 100,000 people.

Two famous places to visit are the Bridges of Madison County and the site of the movie Field of Dreams.

Both are in remote areas that are very safe.

Dubuque is a nice river town that has a lot of history and museums.

Their museum of the Mississippi River is one of the best river museums in the nation.

Scandinavians settled the area in the 1800s and there is a lot of history to explore in this area of the state.

The 325-mile great river roadway travels along the Mississippi River and is very safe.

It’s a great adventure in itself, with lots of small towns along the way.

The Amana Colonies are a group of seven villages that have preserved their German heritage in a pristine manner.

Places to Avoid in Iowa

Iowa has a low crime rate, but it has inched upward in recent years.

Council Bluffs is a small city of 62,000 but has a crime rate double the national average.

Des Moines is the largest city at 202,000 and has the second-highest crime rate in the state.

There are very few areas that are absolutely unsafe.

Avoid being out at night alone in cities, and keep an eye on your surroundings during the day.

Being alert will go a long way in keeping you safe.

Most crime is done when people are not paying attention to their surroundings.

Criminals are looking for easy targets, and it takes just a little planning and paying attention to avoid providing them with an easy target.

Safety Tips for Traveling to Iowa

So... How Safe Is Iowa Really?

Iowa is very safe, but like anywhere, there is some crime.

While the state’s crime rate remains below the national average, it has crept upward over the last couple of years.

Iowa had a spike in overall crime, however, with a 13 percent increase in 2020, making it the 34th compared to all other states.

Council Bluffs is a medium-sized town just across the river from Omaha, Neb., and it has a crime rate that is 144 percent above the national average.

Des Moines, the largest city, has the second-highest crime rate.

While crime may have ticked up a little, the state itself remains safe for travelers for the most part.

A lot of crime happens in areas that have bad reputations, and most tourists do not visit anyway.

Areas frequented by tourists are very safe, and very little crime is reported in these areas.

Much of the state is rural and dotted with small towns, where there is very little crime.

In rural areas, the greater danger would be getting lost on some obscure road.

How Does Iowa Compare?