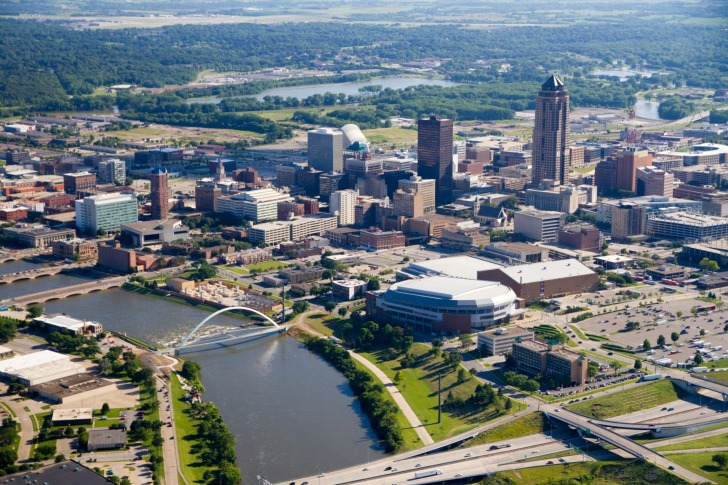 Des Moines, Iowa, is a capital city in the heart of the Midwest.

It was once known for being boring and buttoned-up but has been shedding that image a little bit at a time as the city revitalizes itself.

The city of more than 214,000 people still holds on to that “Iowa Nice” personality while exploring cultural spots and outdoor spaces that are more for a family walk through the park.

This isn’t your grandpa’s Des Moines.

Even Politico wrote an article titled “How America’s Dullest City Got Cool.”

Iowa has long been the first influence in presidential elections, with the Iowa Caucus becoming the center of the political world every four years.

Even at its busiest, Des Moines is still one of the most affordable places to visit in the country without sacrificing quality.

The city is more than the cornfields Iowa is known for, and you’ll be amazed at some of the up-and-coming districts to enjoy.

With growth has come some safety issues, and we’ll go through all the risks and rewards of this slice of Midwestern America.

I promise you, some of the nicest people you'll ever meet are in Des Moines, but the city does come with medium risk, and crime is nipping at the heels of niceness. Violent crime rates are nearly twice the national average, and theft rates are at a one in 42 risk rate.

DART is the public transportation system for the city and into neighboring suburbs. Rental cars, taxis, and rideshares are readily available. There's low risk with any option.

I was even surprised at the 130 pickpockets and purse snatchings reported in 2020. Since there were more than 5,000 thefts total, it's not a huge risk, but it's still a reasonable risk to know that these types of petty crooks are out there looking for an easy score. Make it harder for them by hiding your wallet in a jacket pocket or front pants pocket. Bring small purses that are crossbody, so they aren't easy to snatch.

Iowa can get severe weather throughout the year. Severe thunderstorms with tornadoes are the biggest and most dangerous risk. You really need to stay weather aware here all year long. Winter can bring snowstorms, blizzards, and ice storms. Extreme temperatures can happen in winter and summer.

The robbery risk is 63% higher than the national average, but only 22% of those robberies happen in public spaces. You just can't let your guard down here due to the growing crime rate.

If there were a city for terrorists to target in Iowa, it would be Des Moines, but it's still not a big enough city to bring a high risk. During the caucuses, there might be a greater risk.

The scams here are centered around locals and don't break the mold of the typical scams. Mostly you want to watch out for spoofing scams, law enforcement threats demanding payment or face arrest, or utility scams - but again - what are the odds a tourist will face that? It's low risk.

Women have the same medium risk as anyone else and should use caution when walking around at night. Always travel with another person and stay in crowded and well-lit areas.

The 2022 Consumer Confidence Report shows full compliance with all requirements and a very detailed list of what the city does to keep the water safe and how you can help.

You can feel secure choosing from the attractions there or purchasing discount tickets, but other than direct venue sights, but careful with any ticket purchases through third parties.

Terrance Hill is the governor’s mansion and a fine piece of Victorian architecture.

It has a regal appearance, but I also kind of see how it could look like a haunted mansion from the Lizzy Borden era.

Terrance Hill has an app where you can get tickets and reservation information.

The Des Moines Botanical Gardens are in bloom every month of the year, with rotating flowers and plants to match the season.

Sixteen gardens await your visit, and you can even take a few moments of peace and quiet in the reflection garden.

In addition to all the typical animals you’ll find at a zoo, there’s a train that goes around the zoo and a carousel offering rides.

You have at least three opportunities to feed different animals, including giraffes (my personal favorite).

VIP tours are available for an additional cost to meet a wallaby, penguin, sea lion, or giraffe behind the scenes.

Papajohn Sculpture Park is a collection of eclectic and dynamic works of sculpture art.

This is the Central Park of Des Moines, stretching nearly five acres through the heart of the city.

This is also a great place for a morning run or an evening stroll.

Salsbury House & Gardens takes you inside a castle-like home built for a cosmetic magnate in the 1920s.

The impeccable finishing complements the incredible collection of art.

Tours are limited to 10 tickets each.

A visit to the Iowa State Capital starts with the gleaming 23-karat gold done on top and brings you into the historic structure that looks more like a mansion than a government building.

Places to Avoid in Des Moines

Des Moines is a bit of a contradiction, as it ranks high in a lot of positive categories yet has this growing crime rate.

There aren’t any parts of town where you’re going to be in danger if you end up there.

There are just some neighborhoods that might have more crime than others.

If you stay near all the tourist attractions and major roadways, you’ll wonder why I would even mention crime in this seemingly “Pleasantville” model city.

The Capital East District is one place you want to use caution in if you’re there at night.

It’s not the safest place to walk around by yourself.

While you might be more creeped out by shady characters than actually in danger, it’s smart to avoid this part of town after sundown.

West Court Avenue has also seen a rise in crime in 2022.

Sgt. Paul Parizek of the Des Moines Police Department told local station KCCI, “The frequency of the violence in the form of a fight or dispute is much lower than it was in years past, but the level of violence when it occurs is much greater.

People are bringing guns and bringing knives — and they’re not hesitating to use those.”

Iowa has a growing drug problem, like many states.

The latest concern involves prescription drugs that look like real pills but are loaded with deadly doses of Fentanyl.

Don’t buy any drugs from someone on the street, no matter how real the drugs look.

While you shouldn’t use illegal drugs, to begin with, the drugs here could cause an overdose or death without the user realizing how dangerous it is.

So... How Safe Is Des Moines Really?

Des Moines is a tale of two cities.

The thing is – it’s all the same city.

There’s a really strong chance you won’t notice any of the violent crimes or even petty crimes.

You might leave Des Moines and think I was nuts for giving it a medium risk.

Heck, at first, I doubled and triple-checked the crime data to make sure I wasn’t nuts.

The Des Moines Police Department didn’t supply crime data for 2021, making it more challenging to do any comparison from year to year.

While the submitting of crime data to the FBI is voluntary, historically, the majority of departments have complied.

Reporting crime trends and other information helps a city get government funding.

It also helps the politicians know what to fight for in Congress.

Buried in the police department’s website, I found a 2021 Statistical Report, on which I based the crime information in this article.

The city started a program in 2022 called Cure Violence, which is a leadership and community partnership to stop crime and identify the repeat offenders responsible for many crimes.

“Our community has been asking us to do things differently and to try something new,” City Manager Scott Sanders said.

“We have to take the risk and find a unique way to address the issue of violence in Des Moines.”

The majority of the crime happens between people who know each other, as 15% of violent crimes were against strangers in 2020.

28% of thefts are car break-ins, and 47% of violent crimes happen in homes.

Some basic safety practices will go a long way here.

My greatest hope is you visit Des Moines and think I’m nuts for giving it a medium risk.

How Does Des Moines Compare?