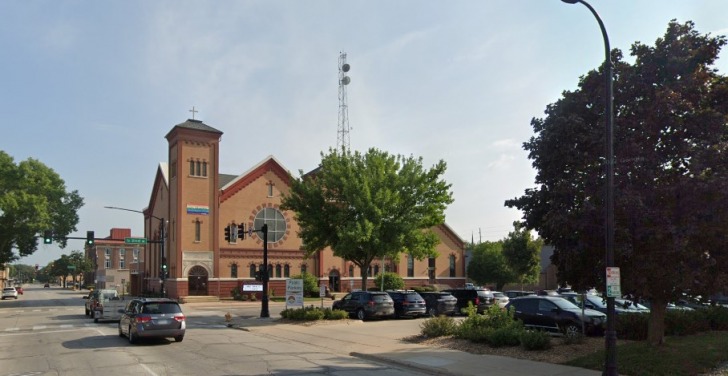 What do Australian-born actor Hugh Jackman and Mason City, Iowa, have in common?

Here’s a hint – you might otherwise recognize this town as “River City, Iowa.”

You should start planning your trip now because this is the home city of Meredith Wilson, who wrote the hit Broadway show “The Music Man,” which is now having a renaissance on Broadway with Jackman as the leading man.

Wilson was born and raised here and this city inspired “The Music Man” as Wilson wanted to pay homage to his hometown.

Christmas time is amazing here, with a tree in the grand Historic Park Inn Hotel, and one in the park nearby as well.

It’s the sturdy kind that doesn’t mind the snow.

While you have plenty of hotel options here, getting into the Historic Park Inn Hotel should be on your bucket list because it’s the last of its kind still operating as a Frank Lloyd Wright-designed hotel.

You can also look at hotels and cabins at nearby Clear Lake, which is 10 miles west.

Clear Lake was also the site of the “day the music died,” when Buddy Holly’s plane went down shortly after a performance there.

The Big Bopper and Ritchie Valens also perished in that crash and you can visit the crash site for a moment of silence.

This northern Iowa town is abundant with prairie-style architecture too.

Forget a Mc-anything meal and try some of the unique eateries in this historic district.

Some of the restaurants here have been going non-stop since the early 1900s.

There are also plenty of activities along the Winnebago River, including fishing, boating, and kayaking.

New construction in 2022 has led to more accessible tourist spots along the river.

Rain or shine, there’s a lot to do in Mason City, Iowa, and you’re guaranteed to get “Seventy-Six Trombones” stuck in your head, as I have now.

There's low risk when visiting Mason City. The town of 27,000 people has average or below-average crime rates. You will also find a lot to do here, making a safe trip even more fun with indoor and outdoor amenities.

Mason City Transit is the public bus system. You can call a taxi or rideshare, though they might not be as plentiful as if you were in Des Moines. Having a car here is going to be ideal. You can also bicycle throughout the city, as everywhere in Iowa caters to bicyclists.

The theft risk is the only category that is much higher than the national average, but that could be anything from shoplifting to car break-ins. Given the one in 51 risks, you should take extra care to hide your wallet or down-size your purse. There's still a low risk if you use basic safety techniques.

10 robberies in 2021 means there's a low risk it will happen to a tourist. The violent crime risk is one in 246, about an average per 100,000 people. If you are confronted by a robber, don't fight back. Just try to remember as much detail as you can to give the police.

There's a low risk here with a smaller population and no military bases. Des Moines or Minneapolis would be the closest hard targets, and those are both two hours away.

The top scam of 2022 involves residents getting threatening calls about their water service or power being shut off unless they pay immediately. This isn't going to impact tourists, so there's a low risk of being a scam victim here.

There's a low risk, but I did want to mention the 14 sexual assaults that happened here. When you figure out that statistic "per 100,000," it's nearly 30% higher than the national average. If female travelers avoid walking around at night alone, don't meet someone online, and then go to a private place, and keep aware of their surroundings, there isn't an inherent safety risk at all.

There's a low risk of any contaminated water coming through the Mason City pipes. That's according to the 2021 Annual Water Quality Report. No violations were reported and all categories of concern were compliant with environmental regulations.

Mason City has an abundance of activities, so I’m going to try to do them justice in this article.

It will be impossible to get to them all.

If you are with a large group here, you can schedule a tour that will give you easy access to a lot of the top sports.

You can do a “Music Man” tour, a Frank Llyod Wright architectural tour, or a tour of the unique transportation in Mason City.

The Elmwood-St. Joseph Cemetery is another spot to visit.

I know it sounds weird to visit a cemetery.

This is the final resting place for Meredith Wilson and tours are hosted to learn more about the history of the residents buried here.

The architecture here is especially noteworthy.

Some of the most popular attractions include:

Just adjacent to Wilson’s home is “The Music Man Square,” which is a streetscape designed in 1910s fashion.

Outdoor enthusiasts should visit the Lime Creek Nature Center on the banks of the Winnebago River or head a few miles east to visit Shell Rock River Greenbelt.

Places to Avoid in Mason City

The southern and eastern sides of Mason City have the lowest property and violent crime rates.

The rest of the crime is spread pretty much throughout the entire city.

When you are in rural areas, you should avoid stopping in corn or soybean fields.

While it looks like a wide-open space, that’s someone’s personal property and income stream growing in that field.

This isn’t a place where you should go running your mouth about politics, gun rights, or religion.

This is a very conservative area and no discussion is going to change anyone’s mind.

If you see a fight starting, get out of the area.

In 2021, there was a homicide inside the Happy Donkey Bar, which led to one man being killed and another shot by a police officer after the suspect pulled a gun on the officer.

In May of 2022, two campers got into a fight over a parking spot, and one of them was shot.

So... How Safe Is Mason City Really?

Mason City is one of those cities I’ve gone back and forth on whether it should be a medium or low overall risk.

Low feels too safe and medium seems too dangerous.

Perspective is important, too.

If you come from a place where it’s not odd to hear gunshots, then you’ll think it’s safe here.

If you come from a very safe city, you might be alarmed.

Mason City is seeing an increase in gun violence in 2022.

However, so are many other cities across the nation.

I haven’t seen one report where the violence was specially targeted at a tourist or completely random and impacting a tourist, but if the convenience store you’re visiting gets robbed, then it does impact you.

I communicated back and forth with the Mason City Police while researching this story.

They are easy to get a hold of and very responsive.

While there isn’t crime data for the first half of 2022, here’s the risk of crimes that are most likely to impact a tourist from 2021:

People in Iowa are notoriously friendly, and it can give a false sense of safety in any community.

You should always lock the car & hotel doors and secure the windows before you park the car or go to sleep.

Don’t walk around with a lot of cash and avoid any suspicious behavior until you can get to a safe place and report it to the police.

If you are using a camper, be sure there’s a good way to lock valuables when you aren’t at your campsite.

How Does Mason City Compare?