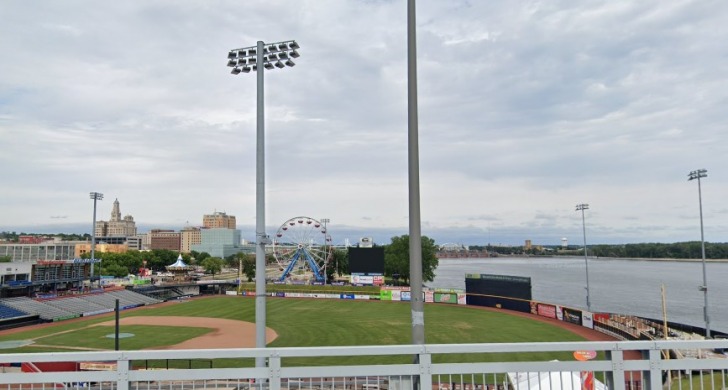 Davenport, Iowa is the patriarch of the Quad Cities region along the Mississippi River at the Illinois border.

The Davenport metro area is home to five major cities, even though it’s called the Quad Cities (East Moline is sometimes not mentioned in reference to the moniker).

Davenport holds almost a third of the population in the metro area and is the largest.

Other cities in the area are Bettendorf, Iowa, Moline, East Moline, and Rock Island in Illinois.

One unique part of the Quad Cities is that the Mississippi River flows east/west here.

While the entire river is a north/south river, it just takes a turn right through the heart of this metro area and also acts as the state line between Iowa and Illinois.

Davenport is broken down into several districts:

I’m not going to bury the lead here.

Davenport isn’t the safest city in the country, much less in the Quad Cities.

However, we’re going to talk about the safest ways to visit the city and enjoy your time here.

There is no getting around the medium risk here. Crime rates are high across the board and many categories are growing. The city averages 10-15 homicides a year. The violent crime rate is 37% higher than the national average and in stark contrast to the much safer Bettendorf, Iowa, next door.

The Citibus Transit is the way to get around Davenport. The planners of the Quad Cities didn't work together to have a transportation system for all the cities, so you'll have to figure out connecting systems for Davenport, Bettendorf, and Rock Island. Citibus does go into Moline and Rock City.

There's a medium risk here. The theft rate is almost twice the national average and the city has a 16% poverty rate. There's also a growing drug problem that can lead to more theft. Use a lot of caution here and don't bring anything of value with you as you tour Davenport.

There is an ongoing risk of flooding in all of the Quad Cities. A quick YouTube search will show you how bad the flooding can be here. That's on top of the warm weather risks of severe thunderstorms and tornadoes. Then there are winter concerns of blizzards, snowstorms, and ice storms. It all adds up to medium risk and you should be prepared for anything during a visit here.

The whole area has a medium risk due to the impact an attack could have on river traffic and water quality. There's also an Army Arsenal on Rock Island, which could be a terror target.

There's a warning on the police department's website about elderly scams, so if you're of a certain age you should review that before visiting. However, the most common risks are the ones that happen everywhere. There's no tourist-specific scam or unusual scam in this area.

Women, have your guard up and travel with a buddy if you can. On top of the crime rates we've mentioned, the sexual assault rate is almost twice the national average with 108 varieties of sexual assault in 2021.

The tap water is the safest part of Davenport, with low risk. The 2021 Annual Water Quality Report shows no violations and all water meets or exceeds requirements. That can quickly change if there is flooding, so check the city website before you use water during a flood.

Safest Places to Visit in Davenport

The port is technically in Moline, Ilinois, but you’re going to see a lot of boats on the water and wonder “How do I get on one of those?”

There’s even a day-long cruise that takes you to Dubuque and back.

For longer adventures, check out river cruises that run the full length of the Mississippi River.

Downtown Davenport has a historical architecture with plenty of shopping and restaurants.

The Bix Beiderbecke Museum is also located there, with reflections on the jazz musician’s life and musical stylings.

Events are held at the museum throughout the year, so check the schedule before you visit.

The German American Heritage Center is another reflection of cultural influences in Davenport.

The city prides itself on being “the most German city” in the Midwest.

The museum is a great place to see how the city earned those bragging rights.

The Sky Bridge is a high-tech design pedestrian skywalk that gives unmatched views of the Mississippi River.

(Well, as a St. Louis native, I must say St. Louis Arch does too, but it’s along the water and not over the water like the Skywalk.)

At night the Skywalk is lit in LED colors.

I’m not sure which part of the Village of East Davenport looks more fun – the activities throughout the year or the unique stores and restaurants.

Rhythm City Casino Resort is on the north side of Davenport.

The casino has all the amenities of a Las Vegas one, with table games, a sportsbook, and slot machines down every aisle.

There is a hotel there if you’d like to stay and play.

Restaurants are on site too.

You even have the Bellagio conservatory of the Midwest here in the form of Vander Veer Botanical Garden.

This floral wonderland has been open since 1885.

There is also a children’s garden here filled with sculptures.

Bring your camera because you can’t pick the flowers.

Places to Avoid in Davenport

Central and downtown Davenport have the highest crime rates after reviewing a crime distribution map.

The closer you can stay to Bettendorf, the safer you’ll be.

All the hotels are right along the interstate, and crime maps on both sides of the river show low crime rates.

A good percentage of the crime here is being driven by the young adults and juveniles of the city, so don’t assume because you see young people – children even – that an area is safe.

The city is making a concerted effort to crack down on crime, but as of mid-2022, there’s a lot of work to be done and a growing trend of gun violence isn’t helping.

Homicide rates have doubled here in just the past few years.

If there is flooding happening in Davenport before you visit, you might want to delay your trip.

Flooding can be extreme here, and you don’t want to end up spending your vacation sandbagging or in a shelter because your hotel is flooded around the perimeter.

Safety Tips for Traveling to Davenport

So... How Safe Is Davenport Really?

“It’s like a little Chicago now,” said one Davenport resident.

It’s not that the police aren’t making arrests or focusing on the problems, it’s that the crimes keep happening.

The city has launched several juvenile education and recidivism education plans, as well as programs offered to families to have resources so they don’t resort to crime.

There is also a call for community assistance with policing because if nobody reports a crime or says what they know, it’s hard to prosecute many of the crimes.

“Not only has the frequency of shootings increased in our community, so has the magnitude of these events,” Police Chief Paul Sikorski told local station WQAD in 2021.

And at one homicide scene, we determined that there were 98 rounds fired by at least nine different weapons.”

Sikorski added, “As a community, we should all collectively mourn the fact that this violence has become normalized and even accepted in some areas of our community.”

Many of the crimes that happen shouldn’t concern a tourist, other than the risk of being in the wrong place at the wrong time.

There isn’t a rash of strangers being targeted.

Many of the especially violent crimes are gang-on-gang crimes or domestic situations.

Nevertheless, the crime risks might make some tourists a little uneasy:

It’s smart to visit Davenport during daylight hours and stay on the main roads.

Always be aware of your surroundings and trust your gut instincts.

The stretch of hotels along I-74 is in the safer part of the community, and if you can, get a hotel that’s labeled as being in Bettendorf, a much safer part of this region.

How Does Davenport Compare?