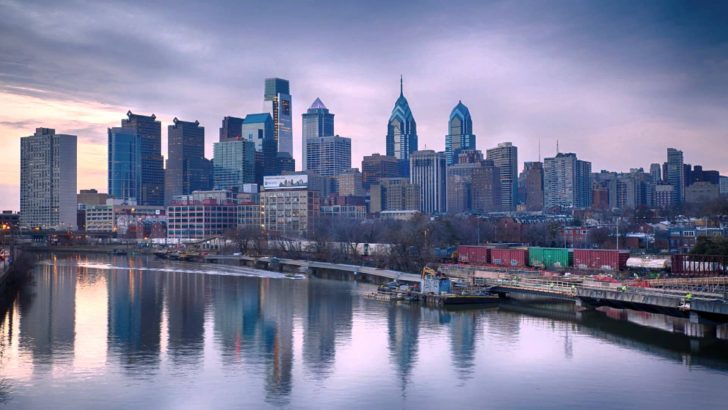 The fifth most populous city in America, Philadelphia, is located in Southeastern Pennsylvania.

Geographically, it is positioned adjacent to the New Jersey and Delaware borders, and with that, its metropolitan area covers counties in Pennsylvania, New Jersey, and Delaware.

Philadelphia has substantial historical significance for the United States of America.

It was once the capital of the United States, and it counts numerous cultural and educational venues like universities, museums, companies, and laboratories that are of world-class.

Philadelphia has to offer some amazing historical venues too.

For example, you shouldn’t miss out on the Liberty Bell and Independence Hall, where the Constitution and Declaration of Independence were signed.

The city has lived through a mid-20th-century decline and is now recovering, becoming slowly the city for those wishing for a true urban American life, without the glitz and glamour of other popular and populous cities in the U.S.

Philadelphia is overall very safe to travel to. Even though it is said that it's one of the most dangerous cities in America, this only applies to dangerous parts of the city, which are rarely frequented by tourists.

Philadelphia is a God's gift when it comes to walking and many adore its convenience when it comes to talking long walks. However, it also has safe and convenient public transport like the Philly PHLASH Downtown Loop. Also, bear in mind that the Southeastern Pennsylvania Transportation Authority (SEPTA) is the fifth-largest and most inclusive transit system in the nation.

Pickpockets and purse snatching can be an issue in public transport and locations frequented by tourists, though the rate of petty crime is on a major decline for the past couple of years. Still, it is wise to watch your belongings while on public transport or in crowded places.

You're not in danger in Philadelphia, when it comes to chances of being mugged or kidnapped. Violent street crime is not a common occurrence but only if you avoid dangerous areas of some cities that even locals rarely dare to walk around.

Excluding isolated shootings, Philadelphia hasn't been the target of any terrorist attacks recently, but the attacks shouldn't be ruled out. Be aware of your surroundings at all times.

Just like in other tourist destinations, there will be people trying to scam you in Philadelphia, too. Homeless people can turn aggressive if you refuse to give them money. Be wary of anyone trying to distract you, flashing large signs in front of you or ATMs that look like they've been tampered with.

So... How Safe Is Philadelphia Really?

Philadelphia has a reputation for being extremely unsafe, but it isn’t quite so.

It is frequently cited as being one of the most dangerous cities in America, but even though the statistics back this up, tourists should bear in mind that this is a huge city with both very safe and very unsafe neighborhoods.

While violent crime remains at a high level in comparison to other American cities, most of it won’t affect tourists: only those included in the drug trade, street gangs, and the likes.

These are parts of the city that tourists rarely see.

For example, the Center City and all its surroundings are very safe and considered to be wealthier neighborhoods, like Rittenhouse Square, Old City, and Society Hill.

This goes for most central districts, too, including the Art Museum Area, Chinatown, the Parkway, Northern Liberties/Fishtown and Bella Vista.

As for the unsafe parts of the city, violence is generally an issue in the north-central, west, and southwest portions of the city, which includes areas surrounding Drexel and Temple.

How Does Philadelphia Compare?