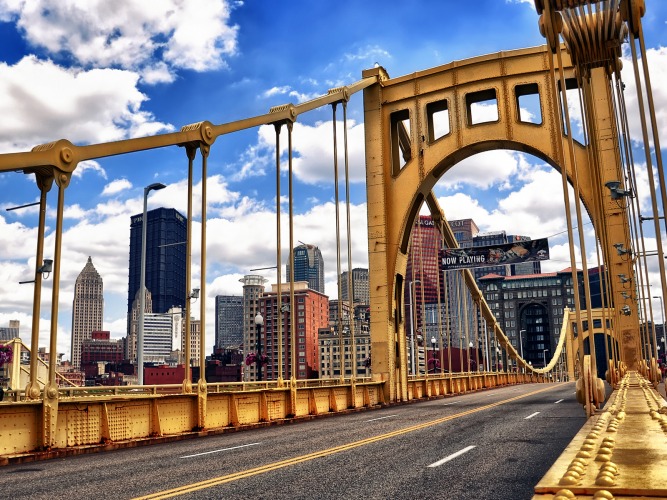 Pittsburgh is a city with a reputation of one of the safest cities of its size, located in the center of the Pittsburgh Region in southwestern Pennsylvania.

There is a bit of culture and history in Pittsburgh, and the city at night is easy on the eyes when it’s new to you: the bridges, Mt. Washington, museums, stadiums, downtown eateries, etc.

Pittsburgh has a unique personality mostly thanks to its people.

Though they may seem rude at times, they are just working class in nature, meaning they don’t hold back from telling it how it is.

The people are also super friendly.

Be ready to have people talk to you just about anywhere, just like in a small town.

Pittsburgh is usually thought of and ranked as one of the safest cities among others of comparable size in the US. Most areas of the city that are visited by tourists are safe, and most of the unsafe areas are residential. Apply caution all the time.

Transport is mostly safe but tourists should be careful of the so-called Pittsburgh left. It's a peculiar phenomenon typical for Pittsburgh: namely, at traffic lights, a driver wishing to turn left will do so as soon as the light turns green, regardless of whether another vehicle has the right-of-way.

Pickpockets aren't a serious issue in Pittsburgh, though you can run into an occasional bag snatcher. Remain vigilant at all times and leave your most valuable belongings in your accommodation.

Floods are the major threat as far as weather disasters in Pittsburgh. There are also tornadoes and microbursts on occasion, but not too frequently and even when they do hit, its only a very small number of Pittsburghers who are affected.

Extra caution, especially at night, should be used in some of the neighborhoods in Pittsburgh because they're known for somewhat high rates of crime.

Excluding isolated mass shootings, Pittsburgh hasn't been the target of any terrorist attacks recently, but the attacks shouldn't be ruled out. Be aware of your surroundings at all times.

There aren't many scams in Pittsburgh. Still, be wary of people trying to distract you to steal from you and of people overcharging you for various services. We advise you to be extremely careful when handling money and around ATMs.

Pittsburg has no issues that would endanger females specifically but general caution is advised in dangerous neighborhoods and after dark. Following basic precaution measures should minimize the chances of anything going wrong.

So... How Safe Is Pittsburgh Really?

Pittsburgh is usually thought of and ranked as one of the safest cities among others of comparable size in the US, which for the most part means that you can relax!

As far as hard crime goes, it’s lower than most medium-sized cities.

However, if you go looking for trouble, you’ll find it quickly.

That said, if you stick to yourself, steer clear of committing crimes and crossing criminals, there’s a high probability you’ll not be accosted or confronted or be in any real danger.

Like any other city, there are bad areas around, but for the most part, they are easy to avoid and you have no reason to go there.

Downtown Pittsburgh is very safe during the day and most of the time people are walking around all over the place.

However, you do not want to go walk around at night as the streets get empty after dark in most places and you aren’t safe walking around.

Downtown is the only place you are likely to be, where there is any crime at all, but as long as you follow common sense you won’t be in any danger.

In the city, tourists should avoid the Hill District, and be careful in the north side as there are plenty of attractions and things to see, but it is not a very safe place especially after dark.

How Does Pittsburgh Compare?