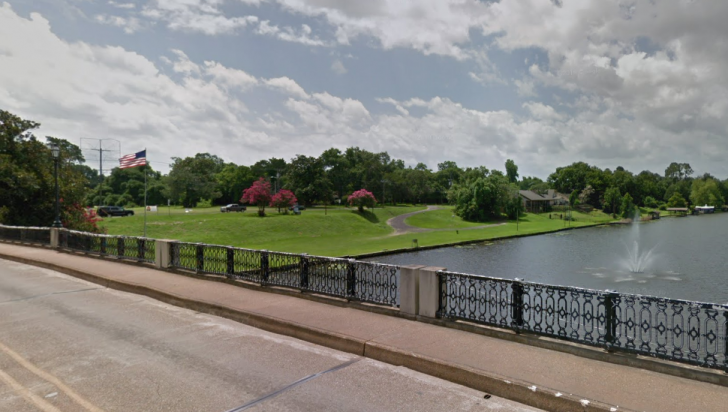 Natchitoches, Louisiana, is a mouthful of letters and a bigger influence on the world in more ways than you might realize.

The town of 35,000 people sits between Shreveport and Alexandria in rural Louisiana.

Pronounced “Knack-uh-tish,” this city is the setting for Steel Magnolias and Reese Witherspoon’s film debut in Man in the Moon.

That would be impressive enough if it weren’t for Natchitoches being the first settlement of the Louisiana purchase – an atmosphere that still lingers to this day.

I’d like to tell you there’s a nickname or shorter way to say Natchitoches, but the nickname is “A Destination of Travelers since 1714.”

You are safe calling it the “City of Lights,” too, due to a holiday celebration dating back to 1927.

More than a million people visit this historic city each year, many for the annual Christmas festival that would make even Santa Claus a little jealous.

You can even stay in the bed & breakfast featured in the Steel Magnolias movie.

Nearby, the outdoor Cane River National Heritage Area is home to several plantations, some of which were seen in the movie 12 Years a Slave.

Natchitoches is a city that could easily be passed by on the highway, but you’d be missing out on many new adventures in Louisiana’s oldest city.

NOTE: There is Natchitoches, Texas, too, so be sure you’re researching the right one. Again, this is the Natchitoches in Louisiana.

Natchitoches is as much a retirement city as it is a college town, and it's riddled with poverty, hovering near the 22% mark. As much as the city has to explore, it has to address some systemic poverty and criminal issues. While there's a low risk for those visiting the main attractions, don't go off the beaten path in this area because there are some high-crime areas.

Without a public transportation system, you would rely on taxis or rideshares if you didn't have a car rental. We strongly recommend having your own ride because there aren't always going to be enough taxis or Ubers to go around.

Use extra caution during the busy season, like the holiday festival, but there's not a risk high enough here that common sense can't override.

You have to worry about severe thunderstorms and tornadoes, plus the potential for tropical weather during Hurricane Season, which runs from June through November. The city is also a possible evacuation point for people escaping New Orleans, which could lead to supply issues.

The latest crime data made available is from 2020, and 29 robberies were reported that year. When you add that up to the "per 100,000" average, it's at the national average. Stay out of the neighborhoods, and you'll lower your risk. There are some recent reports of increasing violent crime in 2022, but exact numbers haven't been given.

There's a low risk here since the city is so small and rural. Even the emergency management website for Natchitoches doesn't touch on terrorism concerns. It only focuses on severe weather and tropical storms.

Phone scams are residents' biggest complaint, but that will not impact a tourist. The only concern you should have is renting a home outside of the main vendor's website, like using Craigslist to look for a deal. Stick to official booking sites instead of looking for discount deals that could be scammers posting fake homes for rent.

While there isn't a lot of crime data offered up by the local police department, there's nothing in the research I was able to do suggesting women would be at a higher risk. Use caution after dark, and don't walk around alone.

The 2021 Water Quality Report shows full compliance and no violations. If you want to review the report, it's technically called "The Water We Drink 2021" instead of the standard title.

Safest Places to Visit in Natchitoches

Natchitoches.com is the official tourism site for the city.

It’s important to know here that Natchitoches is a city and a parish.

A Louisiana parish is similar to what other states call counties.

So the city of Natchitoches is in the Natchatosish parish.

The parish includes a wider spread of other cities.

Further complicating the tour plans is that much of the parish is in the Can River National Heritage Area.

While it might sound like a park, it’s actually a large area spanning 116,000 acres and brings the Creole way of life to light through historic plantations, trails, and monuments.

CaneRiverha.org is the official site to download maps and a tourism guide.

A tour would be a great way to start a visit to Natchitoches.

With so much history, you can choose from a walking tour, boat tour, historic district tour, military tour, or a national heritage trail.

Once you know some of the history here, you’ll have a better appreciation for the architecture and layout of the city.

Download the Natchitoches Film Guide to get a list of all the movie sites to see, with special attention to Steel Magnolias and The Man in the Moon.

You can also learn how the movie YaYa Sisterhood was *this close to being filmed in Natchadoches and what caused the deal to fall through.

The Natchitoches Fish Hatchery is also open daily for tours outside of federal holidays.

In addition to learning the science of a hatchery, you can get the story of how places like this fueled rural America during the depression.

Don’t miss the Louisiana Pearlshell Mussel, as this is one of the only places on earth you can see it.

The Louisiana Sports Hall of Fame is also located here.

It’s also right near the downtown area on the river with cobblestone streets and water rentals if you want to ride the river.

Be sure to try the famous Natchitoches Meat Pie while you’re there.

Whether you call it an empanada or meat pie, you’ll love the mix of meats in a flour shell with Cajun spices.

Places to Avoid in Natchitoches

Whether intentionally or not, the police department is incredibly vague about crime rates here.

They’ll address an increase in crime that prompted an “Additional Street Patrol Unit” to be dispatched due to rising crime, but they won’t talk about hot spots for that crime.

On the flip side, the city isn’t really that big, to begin with, so it’s hard to narrow it down more than it is by design.

Add to this mix that some studies rank it as one of the safest cities in America.

The best advice is to stay in the tourist attraction areas and the historic district.

Be on guard, but not paranoid.

This is a long-time poverty-stricken area, and the city is fighting to improve living conditions and opportunities for the young community.

Will a tourist notice any of that?

Likely not, but don’t convince yourself this is a safe, quaint, historic town.

There’s an underbelly you don’t want to see.

Safety Tips for Traveling to Natchitoches

So... How Safe Is Natchitoches Really?

Access to updated crime data is uncomfortably hard to find in 2022.

No official 2021 numbers were released by Natchitoches Police Department.

The 2020 numbers go into little detail, but violent crime was 15% higher than the national average as of that year.

Thefts were 25% higher than the national average.

One thing we do know is that in April of 2022, the police department enacted the Additional Street Patrol Unit (ASP) to assist with the “recent increase in shooting this year (2022).”

“The goal of the ASP unit is to reduce gun violence and to directly address the rise in criminal activities that have been affecting citizens in the City of Natchitoches.

The ASP unit will be proactive and dedicated to stemming the senseless violence that has led to the loss of life, injury to bystanders, damage to property, and the terrorizing of communities,” said Chief Nikeo Collins.

In the first week of the ASP enactment, 21 arrests were made, and six firearms were taken off the streets.

Police here are much more likely to talk about details of what’s being done to combat crime than give a real look at how bad the crime is (or isn’t).

We also know a multi-parish bust took 171 people off the street for gun and drug crimes.

Since this is a major tourist area, it’s just smart to use standard safety precautions anyway.

Adding in the known increase in violent crime, with or without exact data, is another reason to be careful when visiting here.

Use extra caution at night, but you should do that in any city you visit.

How Does Natchitoches Compare?