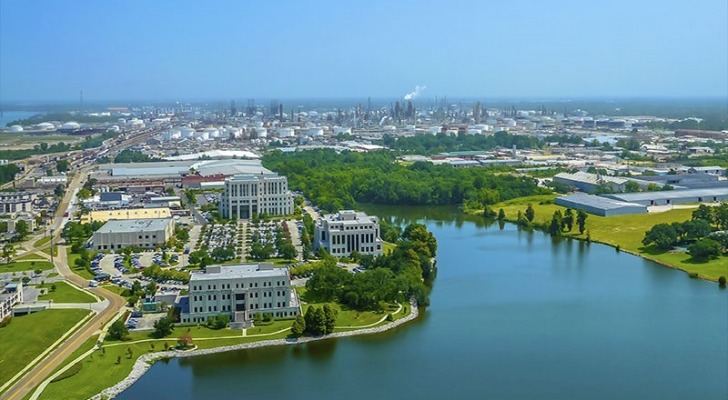 Let’s “Geaux” to Baton Rouge, Louisiana, and get a Cajun taste of this spectacular city and its parishes.

The Louisiana (as many say, “Lou-ziana”) city is pronounced “Batten Rewghe” for those who aren’t familiar.

It means “Red Stick,” and yes, the city was first marked by a stick covered in animal blood declaring a new boundary.

Hugging the east side of the Mississippi River, Baton Rouge is home to nearly 230,000 people and growing.

Don’t be surprised if someone asks you to go to Death Valley, but you won’t be heading for the California desert.

LSU sports fans are among the most diehard you’ll ever meet, and playing in Tiger Stadium is where “opponents’ dreams go to die.”

Here you get directions based on the location of The Castle and eat crawfish on a paper-covered table with your hands.

You won’t be able to decide what’s thicker – the Étouffée on your plate or the humidity in the air.

Perhaps the most laughable comment I found during my research of this city is a comment about the summers, “June is going to be miserable, July makes you want to punch a baby, and by August, you will be questioning if there is a God.”

You’ll be among more than eight million tourists who visit here each year and several ghosts that just can’t see to let go of their place in Baton Rouge history.

There's a medium risk and growing in Baton Rouge, with violent crime rates increasing while the police department struggles to find enough officers to fight the crime. That said, this isn't a unique problem for Baton Rouge. Many U.S. cities are facing increasing gun violence and drug crimes. Baton Rouge makes the Top 10 List of Most Dangerous cities, but it also has residents who love the city and all it offers outside the criminal world.

Capital Area Transit System (CATS) is the public transportation in Baton Rouge. You can buy passes for the day, week, or weekend. A week-long pass will cost $19. Taxis and rideshares are readily available, as are rental cars.

There's low risk when you look at the crime data but go with a medium risk because there are a lot of crowds. Especially if you're visiting during Mardi Gras or LSU Game Day, you'll need to use the utmost safety precautions to keep your belongings safe.

Baton Rouge gets hit hard by hurricanes and flooding, with severe thunderstorms and tornadoes also being a risk. Because disasters can hit any time of year, there's medium risk. If you are visiting during hurricane season, you can't afford to miss the emergency management plan on the city's website.

There's a medium risk here, with 45% of the robberies in Baton Rouge happening in public places and the robbery rate being two and a half times the national average. You should never fight back against a robber in general, but in Baton Rouge, there are a lot of violent criminals out there. Just comply with demands and try to remember as much as possible to report to the police.

There's a medium risk here, too, with a large tourist area and a stadium big enough to form its own city on game days. The city has also seen violent protests in the wake of systemic racism problems in America, which isn't a terrorist activity, but it's a safety concern on a larger scale.

Book your vacation rental through a verified travel agency to avoid rental scams. Don't buy tickets to anything on third-party websites offering incomparably low prices. Anything that seems like a deal too good to be true usually is. The city also has a nearly 25% poverty rate, so there's always a chance a new scam will pop up on the streets, or you'll be panhandled for money.

Women just need to use the basic safety precautions like anyone else. As long as you are confident when you walk and smart enough to avoid wearing flashy jewelry or touting your Louis Vuitton bag on your arm while walking around at night, you'll have the same medium risk everyone else does. Use good judgment if you decide to enjoy the nightlife, and don't ever leave a drink unattended. It's easy to get swept up in the party atmosphere here, but there's always someone lurking - looking to take advantage.

After looking at nearly 300 water quality reports, it's nice to see when a water utility uses more than the basic language required by the Safe Water Drinking Act. So, I'm going to share part of the statement from Baton Rouge Water, "We at Baton Rouge Water Company are proud to have had 'no violations' during this monitoring period and are happy to show you how we’ve surpassed EPAs National Primary Drinking Water quality standards." You should know that flooding can quickly impact water quality, so check the city website if you're visiting during or after flooding.

VisitBatonRouge.com is the official tourism website for the city, so you can feel cyber-safe while visiting the various pages.

You can also sign up for the “Passes” feature on the website, which will give you free links to discounts and deals in your areas of preference.

For example, if you want to eat more than you want to tour museums, there’s a pass for that.

Tours are available throughout the city (and nearby swamps).

Regarding food in Baton Rouge, there are a few items you shouldn’t miss.

Oysters are widely popular and tasty here, with September through December being the prime season.

Gumbo is a staple at any restaurant here.

Creole and Cajun restaurants abound, and crawfish are available any time of year, but the best season is March through May.

For fun, count the times someone tells you to “Pinch the tail and suck the head.”

For my money, I wouldn’t go to Louisiana without having a Po’boy sandwich.

You should also try a Lucky Dogs hot dog if you want a taste of Baton Rouge’s history.

The new building is the tallest capital in the country, and an open secret is the 27th floor has incredible (and free) views of the city.

The old capital is known as “The Castle,” and you’ll see why at first glance.

I’m dying to tell you all the stories of real-life tragedies and paranormal activities, but I’ll resist the urge so you can learn for yourself on the tour.

Schedule a tour of LSU’s Tiger Stadium… ahem… Death Valley, and you might even get to meet the team mascot.

Unfortunately, there won’t be any pictures taken with you cuddling the mascot.

The U.S.S. KIDD Veterans Museum takes you aboard a Fletcher-class destroyer to learn about the history of the fleet and honor those who fought in wars.

You can also learn about history at the Capital Park Museum and escape the humidity with climate-controlled theaters in the 69,000-square-foot museum.

You can also ride the Old Hickory Railroad to see several historic locations on one track.

There are also cruise ships that will take you to different ports on the Mississippi River if you want to do more exploring of the whole region.

Places to Avoid in Baton Rouge

This is a city where you are best served by staying in places designated for tourists.

The neighborhoods north of the interstate and around North Gate near LSU are among the most dangerous.

South of I-10, the parishes are safer.

Unless you visit friends and family in the area, there’s really no reason to go through random neighborhoods.

Stay on main roads and highways, keep to the tourist corridor, and use safety smarts.

If you are flexible with your travel plans, you might want to avoid or get travel refund options if you’re visiting during hurricane season, which runs from June through October.

August and September are the busiest months for the tropics.

If a hurricane is heading toward the Louisiana coastline, don’t assume Baton Rouge is far enough inland that it won’t take a hit.

Baton Rouge is just an hour from New Orleans, and even when the storms weaken after hitting land, they can still be fierce when they hit Baton Rouge.

Baton Rouge could also be an escape zone for people evacuating the coastline, so even without a direct tropical hit, the city could be sold out and work in emergency mode.

So... How Safe Is Baton Rouge Really?

With a spike in violent crimes over the past few years, the mayor has started an East Baton Rouge Parish Violence Reduction Collaborative.

When the mayor was directly asked by a reporter at WAFB what she would say to people who think Baton Rouge is too dangerous, she responded, “I hope that people can know what we’re doing.

I think that will help elevate the level of safety.

I hope that people recognize that when you look at communities across the nation, comparatively, Baton Rouge is safe.

I don’t want people to be fearful.

And that’s why we have to look out for one another.

But I don’t want our community to operate in a spirit of fear, but I want us all to collaborate along the goal of building a safer community, and we’re going to use every entity possible to make that happen.”

I could go through all the specifics of the data that backs up the fact that Baton Rouge is a dangerous city, but there’s nobody who would argue that point, so I’d rather invest the words here more wisely.

There has been a recent rash of crimes around motels (as of fall 2022).

It’s imperative when you’re booking a hotel not to just look at the lowest price.

You should use the Open Data portal to research the area around a hotel and generally avoid a place with “motel” in the name.

A discounted rate isn’t worth the value of risking your safety while traveling.

You can also Google the name of a hotel and the word “crime” to see if any recent news stories come up about that location.

The tourist areas are going to be well-patrolled, and businesses are more likely to have their own personal safety.

Stock up on the phone numbers for law enforcement and emergency management before you go, so you aren’t looking for a phone number in panic mode.

I have many friends who are good, family-oriented people, and you couldn’t pay them enough to leave Baton Rouge.

They love the city.

Just be sure to do the research and sharpen your personal safety skills.

How Does Baton Rouge Compare?