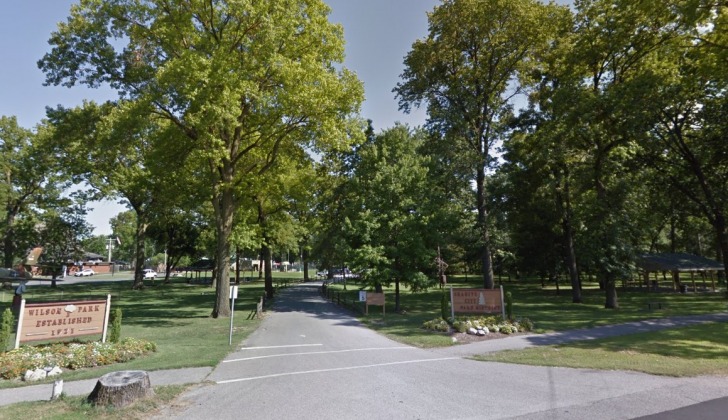 Granite City, Illinois, looks like a manufacturing town when you see the steel factory on the skyline, but there’s also a small suburban town here in the Metro East area of St. Louis, Missouri.

It’s not just an industrial area.

You might wonder why a steel town is named after a rock?

When the city was founded in the late 1800s, there was a new steel-coating technique that resembled granite and its popularity soared.

Granite city has a special place in this writer’s heart.

My first job ever at 16-years old was for a clothing company named Glik’s that still operates in Granite City to this day.

At the time, I had the largest sale ever recorded in the company’s 100-year history.

This is also where my niece lived with her dad, so I spent some time visiting this city, which is truly a slice of Americana.

Tourists won’t find hotels within the city, but there are a few on the fringe areas of the city along Highway 111 near Pontoon Beach.

You can also find hotels in nearby Collinsville.

You also aren’t going to find a lot of tourist attractions within the city.

Aside from a speedway, views of the Mississippi River, and local parks, you’re going to be quite bored if you just stick to Granite City.

There are a lot of things to do in the St. Louis Metro area.

There's a low risk in Granite City, but I'm going to put an asterisk next to the violent crime category, because that is quite high - more than double the national average. Honestly, depending on which neighborhood you are in, this could be either low risk or medium risk. Residents generally believe that it gets a bad reputation for a city that only has crime in certain key areas.

Here you can use St. Louis' Metro transportation system to get around the entire area, or you can choose Madison County Transit for bus service just around Madison County, Illinois. Taxis and rideshares are readily available. There's low risk with any option, but when riding the Metro be sure to keep aware of your surroundings and some of the stops in the St. Louis area might have a much higher safety risk.

The theft rate here is actually lower than the national average. Not by much, but enough that there's a low risk of being pickpocketed. Unfortunately, with the high violent crime rate, this means there might be more of a chance someone will take something by force instead of manipulation.

Flooding is a big concern here and you can search for videos online to see incredible videos of floods that have happened in the past. Certain roads will always flood during heavy rain. You can also expect severe thunderstorms capable of producing tornadoes during the spring, summer, and fall. Winters will likely come with snowstorms and some ice storms. Given the risk throughout all seasons, there's a medium risk here. You should be prepared with working knowledge of weather safety before you go.

The robbery rate is at the national average, so there's not an overwhelming risk. We can call it a low risk if you promise to never fight back if you do face a robbery. There's a one in 1277 chance of being a robbery victim here, but if that escalates to an aggravated assault, that's one of the key areas driving up the violent crime rate.

Being part of a major metropolitan area puts it at medium risk. Terrorists are always looking to target large population centers. You can review the Illinois Task Force Plan to see how to stay vigilant while visiting Granite City.

There are scams targeted at homeowners here, as a lot of homes here were built in the 1950s or 1960s, and are in need of work. There are also utility scams and some cryptocurrency scams. As a tourist, you face a low risk of it happening to you. Nearly 20% of this community lives in poverty, so you might be panhandled while you're here.

There are some parts of town to avoid if you are a woman, and you don't want to be driving around lost at night. The sexual assault risk is twice the national average. As a woman who spent time in this city with her elderly mom, I can tell you during the day you don't have a sense of danger. However, given the crime rates, we're going to stick with a medium risk to help punctuate that you can't let your guard down here.

The water here is safe and low risk. The utility company invested nearly $200 million in water quality treatment facilities in 2021, so the water is safer than ever. You should watch for boil orders if flash flooding occurs during your visit.

Normally, I’m pretty insistent in these articles to stick with attractions only within the named city because we have such an in-depth look at other communities on this website.

However, Granite City doesn’t have a lot to do in the city limits, so we’re going to have to venture a short drive away for a few of these.

Tri-City Speedway is one of the main draws to Granite City for visitors.

The dirt track is newly renovated and the website shows a bunch of upcoming activities.

Be sure to book your tickets well in advance if you can so you don’t risk a sell-out at this smaller race track.

Horseshoe Lake is a great place to visit during the warmer months (or in the winter if you are so inclined).

With nearly 3000 acres, you can fish, hunt, geocache, camp, or go boating.

There are more than a dozen parks in Granite City, an ice rink, and a swimming pool.

Residents get a discount on the facilities, but tourists are welcome with an extra charge.

There’s a park right on the river by the old Chain of Rocks Bridge that gives stunning views of the mighty Mississippi River and the St. Louis skyline.

Definitely worth an Instagram photo, but be sure to visit during the day.

Cahokia Mounds is worth the 15-minute drive to see one of the most advanced pre-historic cities known to man.

Start at the interpretive center, which is newly renovated to understand what exactly you’re seeing at the mound site.

St. Louis Arch is just 20 minutes away and I’d recommend taking one of the bridges that cross right into downtown St. Louis.

Driving over the Chain of Rocks or McKinley Bridge not only takes longer, but it also doesn’t take you through the safest St. Louis area.

Places to Avoid in Granite City

The closer you are to Pontoon Beach on the east side of the city, the safer you’ll be.

The south and southwest sides of the city have the highest crime rates and those are neighborhoods I wouldn’t even drive through if you don’t know anyone who lives there.

Stay on main surface streets and highways instead of cutting through neighborhoods.

If you’re looking for a place to stay that is close to St. Louis, but with some breathing room, there are better communities that are more tailored to the tourist experience nearby, like Collinsville or Edwardsville.

Pontoon Beach is a great small town as well, but there’s not a whole lot to do there either unless you like the outdoors.

If you’ve read any of my other articles about Illinois you’ve already seen this, but I can’t punctuate enough how much it drives locals crazy.

So... How Safe Is Granite City Really?

The violent crime rate is the real concern here.

There is a real problem in Illinois with increased gun violence.

The problem has reached the highest level of law enforcement for support and crime protection.

In May 2022, the U.S. Marshalls targeted a crime bust in Madison and St. Clair Counties, which includes Granite City, to arrest 153 violent crime suspects and confiscated more than 60 illegal weapons.

Granite City is just an older town that hasn’t evolved much throughout the years.

In fact, the population keeps going down.

Unless you are here visiting family or friends, you don’t really have a lure to stay in Granite City.

It’s not totally safe, but it’s also not completely dangerous.

It’s just an average city with an above-average amount of violent crime.

You won’t find stately homes here or big tourist attractions, but there are plenty of them within a 30-minute drive of the St. Louis Metro Area.

How Does Granite City Compare?