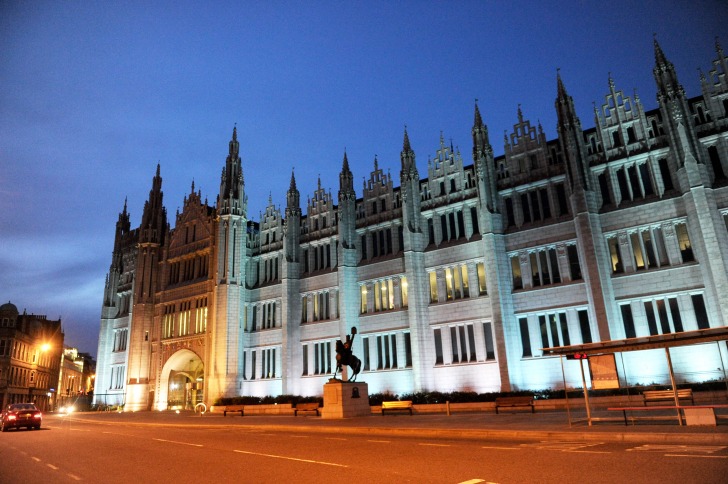 Aberdeen is the third-largest city in Scotland.

It is known as two things: the center of the North Sea Oil industry and a place of gorgeous granite architecture.

Aberdeen is a fairly compact city, and when you are there you don’t get as much of the feeling of being in a big city as you would in Glasgow or Edinburgh.

Aberdeen is an architecturally attractive city with many historic buildings, although they all tend to be grey having been built from the abundant granite found in the area.

Pair this with the near-permanent rain along with a steady, often stiff offshore breeze – and it’s no wonder that many people describe the city as “too grey”.

Aberdeen is considered mostly a safe city. Even though there are parts that are dangerous and should be avoided, it is, for the most part, completely safe to travel to, and if you use your common sense, your trip should go smoothly.

Taxis and other forms of transportation are known to be very safe and reliable in Aberdeen, as would be expected in a city belonging to such a developed European country.

Pickpocketing is the most common form of street crime in Aberdeen, albeit rare too. It is common to a certain degree and there are even some locations known for pickpocketing being reported there mainly popular landmarks. Take basic precaution measures and minimize your chances of being pickpocketed.

You can relax when it comes to natural disasters, because, apart from constant raining, there are no threats in Aberdeen!

When it comes to mugging and kidnapping, Aberdeen is mostly safe. However, you should be careful and avoid dangerous areas where you could get attacked.

Since it is so filled with tourists, it only makes sense that there will always be people trying to scam them. Always be cautious with people trying to distract you, help you with your luggage, or groups of people acting strange. Always check your change twice and negotiate everything in advance

Aberdeen is mostly very safe for women to travel to. Just follow your basic common sense and general rules of things to avoid, and you should be fine.

So... How Safe Is Aberdeen Really?

Aberdeen is, for the most part, a safe city though it does have its dangers.

There are a couple of places that shouldn’t be considered a great location to live in Aberdeen, and these are Tillydrone, Sandilands drive, Northfield, Balnagask, Manor Avenue and Seaton.

The great thing about Aberdeen is how the police patrol the city; everywhere you go at any time of the night, you must see a police patrol team after a couple of minutes passing with their car.

How Does Aberdeen Compare?