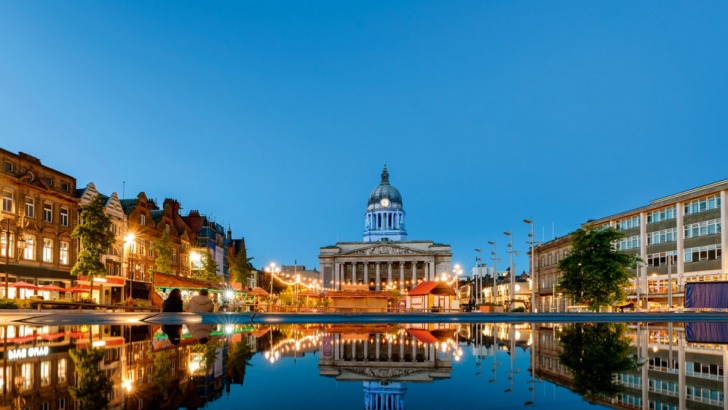 Nottingham is a city in England, and its residents lovingly refer to it as the “Queen of the Midlands”.

It is famous for being the home of the world-renowned legend Robin Hood.

It is steeped in history and legend and you can spend a lifetime learning about its caves, Robin Hood legends and medieval history.

Nottingham has a vibrant city centre that hosts everything from a beach in the summer through to food festivals, regular markets, gaming expos and a whole range of other manifestations.

Some call Nottingham bland, but for what drama and extravagance you miss out on, you get quite a bit of security and its a good place to settle down.

Nottingham is mostly safe, generally, though it has a bad reputation. Crime rates are low and the most common form of crime is car theft and break-ins.

Transportation is relatively safe and reliable in Nottingham, but it is still somewhat known for pickpockets raiding public transport, so do be careful.

There is some risk of encountering a pickpocket, especially around the city square and on the transportation system. Apply the basic laws of precaution to avoid such a situation, and follow your common sense.

There aren't any risks of natural disasters happening in Nottingham, apart from extreme amounts of rain.

Nottingham is mostly safe when it comes to mugging and kidnapping, but it is recommended that you avoid poorly lit and deserted streets and dangerous areas.

Nottingham is mostly very safe for women to travel to. Just follow your basic common sense and general rules of things to avoid, and you should be fine.

So... How Safe Is Nottingham Really?

Nottingham has a bad reputation for being unsafe, but applying basic measures of precaution will make you as safe as you would be in any other city.

Like most big cities in the UK and the world, residents in Nottingham mostly suffer from petty night crimes, such as anti-social behavior, house break-in, vehicle theft, etc.

Nottingham, during the 70s and 80s, was a very safe place to be, but things changed in the mid-90s when gangs moved in and overwhelmed the local police who just weren’t equipped to handle them.

The ‘Shottingham’ label that Nottingham used to have had worn off and crime have gone down massively within recent years.

Nottingham today is comparable to most average UK cities such as Leicester, Sheffield, etc.

Admittedly, some of the mid-range areas are no longer quite as desirable, but general crime, both petty and violent has improved a lot over the past 10 years.

The one exception is burglary which is still pretty bad compared to average UK cities but not as bad as in other crime-ridden cities such as Liverpool, Sunderland, Salford, etc.

How Does Nottingham Compare?