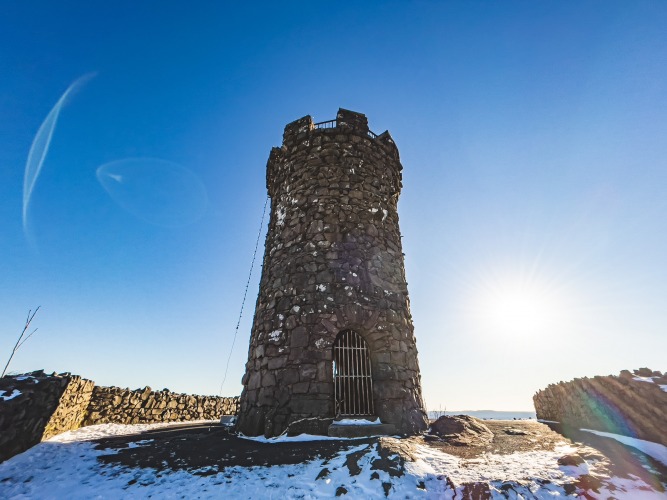 Tucked below the Hanging Hills of central Connecticut sits the quaint community of Meriden.

This is a community filled with history, outdoor wonders, and a few urban legends that make this safe city seem a little daunting (if you believe in that kind of thing).

While you’re not going to get the big-league tourist attractions here or the crowds that go with you, you will find a slice of peaceful life and several breaths of fresh air.

Meriden has many trails throughout the city and several tougher trail challenges in those impressive cliffs just to the north.

What you will get is history from the center of downtown to a castle in the mountains.

You’ll get the comfort of a safe town away from all the bustling activity of the beach towns while still just 30 minutes from the seaside.

From walking tours to rock climbing to strolling over historic bridges, Meriden is a slice of a more simple life with its own unique story to tell.

However, if you happen to see a black dog in the mountains, it could be an omen.

More to come on the Legend of the Black Dog a little later on.

The MeridenBus is the local public transportation option and there is a route to get you into New Haven. There is an option for an all-day pass for just $3.50. You can also get a taxi or rideshare. All options are low-risk. However, one bit of good news for drivers is - street parking in downtown Meriden is free for the first three hours.

Ok, it's a low risk, but learn the lesson these three people didn't. From two pickpockets and one purse snatching, the total take was $2749. That's $916 per person. Please don't carry valuables or cash around in your purse or wallet. If you are carrying around a designer bag, that's going to be tempting for a thief as well, especially if you leave it under the table at a restaurant.

There's a low risk here but you should be prepared for winter weather if you're visiting from December through March. Merdian averages about three feet of snow a year. Flooding could also be a concern if a tropical storm comes inland, and there's always a chance of a hurricane from June through November. It's not as likely for a hurricane to hit here as in southern states on the coastline, and you always get plenty of warning that a tropical system is coming.

There's a low risk that the city itself will be a target, but in this region, it's a medium risk due to the high population. The biggest target would be New York City and that's more than two hours away.

Low risks exist for tourists here as the typical residential scams are the only ones reported.

Women are safe here and there's a low risk. The city does have a sexual assault rate equal to the national average, and by doing research I can't quite pinpoint why, since there's not a lot of nightlife or hot spots where women would be in danger. It's a good idea to never walk around any city at night by yourself.

The 2020 Annual Water Quality report shows a low risk with no violations and all elements meet or exceed required standards. They do ask people visiting to conserve water as much as possible.

Safest Places to Visit in Meriden

Start with a morning run in Meriden Green, a Central Park of sorts in the center of town.

The 14-acre site was once the hub of a busy city, but as history wore on the space became derelict, so the city re-invented the space as a community park.

Hunter Golf Club is a public course and one of the only ones I’ve seen that doesn’t have a more expensive rate for non-residents.

It opens from May through September and you can book tee times online.

The Solomon Goffe House is a living tribute to the house originally built in 1711.

Tours are available on certain days of the week, so check ahead to get a slice of 18th-century life.

You might even run into Norman, a miniature goat that roams the property.

I thought this was rather interesting since I’m a shopaholic.

There’s a Lowe’s Outlet Store with discounts on appliances and home maintenance goods.

I’m sure you won’t take a refrigerator with you on the way home, so some discount tools might be a smart buy on vacation.

Head for the hills.

The Hanging Hills, that is.

You’ll see them as a backdrop to this beautiful city, but there’s also a nearly 8-mile trail of varying difficulties to explore.

This is where an urban legend takes over.

As legend has it, there is a black dog that barks with no sound and leaves no footprints that has wandered this space for centuries.

The dog is friendly and might even walk alongside you for a bit.

The first time you see the dog, it’s a sign of good luck.

The second time, it’s a warning.

The third time means, well, that you’re going to die.

I’ll let you ask around the city about the stories of how this friendly pup can turn into the grim reaper, but some of the stories I read are very interesting.

Places to Avoid in Meriden

Crime maps show that the center part of town, just south of I-691, has the highest crime rates.

This is also the historical downtown area, so it’s going to be busier and naturally have more crime.

The surrounding areas have very low crime, so it does appear the crime happening here is mostly contained to that central part of town.

Meriden isn’t what normally comes to mind when one thinks of Connecticut.

The upscale reputation of the state is actually confined to just a few of the cities.

This is a working-class community with an average income of $58,000 and housing averaging $171,000 – which is an unthinkable number in other Connecticut communities.

Don’t let the fact that it’s not lined with mansions make you think any less of this town.

There is also a large percentage of Latinos/Hispanics here coming in at 33% of the population, so knowing Spanish is a bonus.

If you do believe strongly in urban legends, it’s worth pointing out that the black dog isn’t seen in the city, just in the surrounding mountains.

Safety Tips for Traveling to Meriden

So... How Safe Is Meriden Really?

It is safe as long as you avoid the trouble spots and are aware of the problems being addressed.

Meriden is one of the top cities in the state when it comes to gang activity.

Two prominent gangs are known to have a presence here.

In 2020, a gang shooting happened in broad daylight at Meriden Mall.

The chances of being a victim of violent crime is one in 402.

That’s above the Connecticut average but lower than the national average.

Thefts are higher than the national average and it’s largely due to thefts from cars.

More than half of the 927 thefts were car break-ins.

Shoplifting took another 171 of that number.

When you take those out, the theft numbers are just 211 incidents.

This shows the importance of locking cars, rolling up windows, and leaving nothing of value in the car.

How Does Meriden Compare?