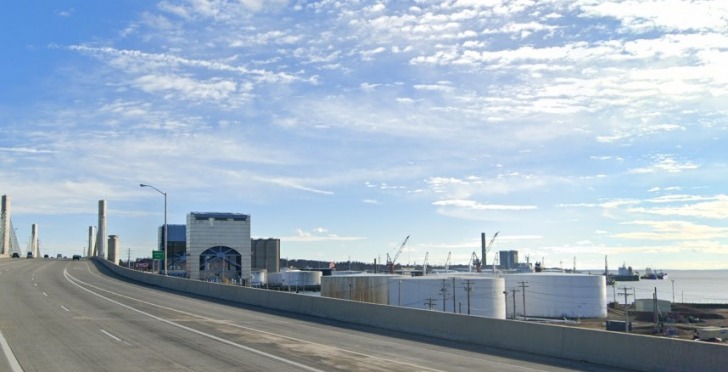 New Haven, Connecticut is very much a good news/bad news type of town.

There is so much to explore, so many amazing restaurants, several centuries of history, and among the top cities for higher education thanks to Yale being here.

There’s also so much crime, so many homeless people, and so much traffic.

This was the first planned community in the country and it was designed around an area still known as “The Green.”

It’s a bigger city with more than 134,000 people but still has a college town vibe with six universities around the area.

You can start the day here atop a rocky mountain looking out at scenic views and be at the beach by the afternoon in the shadow of a lighthouse and wrap the day up with a fine dining experience and dancing the night away downtown.

You have to try the pizza here as it’s the stuff of legends and you can get into yet another discussion if the hamburger was REALLY invented here at Louis’ Lunch Cafe, open since 1895.

There’s so much history wrapped up in this community, but it’s also a town that hasn’t really cleaned up after itself in some regions.

It was once rated one of the most dangerous cities in the country and it is taking steps to fix the crime problems, but progress is coming slowly.

There's a medium risk here. The one thing about New Haven is that it's just so hit or miss. One minute you're admiring the colonial architecture and the next you're feeling uncomfortable at a stoplight in a blighted neighborhood. The essence of upper-class Yale University doesn't match the surrounding community where the average income is $44,000.

This is a transportation hub, so you have many options for getting around the city, state, and region. The Metro-North line will also take you into New York City. Visit the city's website for the list of transportation options, as it's far too long to list here. You can get a taxi or rideshare, and some locals suggest it since parking and driving can be nightmares. If you're comfortable with public transportation, you'll have an easier time with it. It's a medium risk at the bus stops or train station if you aren't paying attention to people around you. Keep a sharp eye on those near you and make sure your belongings are secured.

There's a medium risk of being pickpocketed. 40 pickpockets were reported in 2020, but the unfortunate part is - based on crime numbers - there's a better chance some is going to rob you than try to sneak a wallet out of a pocket. You just have to be on your toes here.

Hurricanes, snowstorms, and extreme cold are the main things to worry about. There's a low risk of getting trapped or injured since those come with plenty of warning before any extreme weather hits.

There's a medium risk and the majority of robberies are highway robberies, which means they take place in public. That doesn't mean they were all tourist-related, as it could also be drug robberies or gang issues, but there is a greater risk for tourists.

There's a medium risk since this is in a highly-populated area and close to New York City. New Haven probably wouldn't be a hard target, but it's close enough to other hard targets that it's worth noting.

The New Haven Police have a slew of scams listed on its website, but they are all targeted at locals by phone or email. Some people even had door-to-door scammers. Elderly people were also more likely to be scammed. Since there are so many potential scams here, we're giving it a medium risk. Just remember to never trust anyone who's fast-talking and offering money quickly if you just "help" them.

Women should proceed with caution as there's medium risk. Especially if you don't know the layout of the city, you shouldn't be wandering around any part of town you haven't researched. Do not walk around this city at night alone. Get rideshare if you are leaving a bar late at night. If you are visiting or staying at Yale, that is a safer part of town and there is less crime there.

The water here is safe to drink and passes all required tests at the state and federal levels. There's low risk with using it and remember when it's below freezing outside to keep a drip in a faucet to keep the pipes from freezing.

If you’re visiting during the warmer months, you must see Lighthouse Point Park.

It’s the most popular beach area in town and features a lighthouse you can tour nearby and a carnival setting with a carousel built-in 1905 that still offers rides.

On the other side of town, you should enjoy a hike at West Rock Ridge State Park.

On a clear day at the top of the ridge, you can see 200 miles around.

You can also fish and kayak here.

You have to visit “The Green” downtown as it’s the hub of the area and also a Historic District.

It’s a 16-acre park that was included in the original design of the city in the early 1600s.

This is a great spot to enjoy lunch, attend a festival, or just enjoy the people watching.

It’s also right across the street from Yale, which is worth walking around just to see the architecture.

Visting Long Wharf Pier is a great idea too, and seasonally you can take a boat ride on a replica of the boat “Amistad.”

It’s also a great place just to get some seascape views of the Long Island Sound.

Places to Avoid in New Haven

It’s hard to tell you places to avoid because crime maps show it’s very hit or miss and spread throughout the city, with 10 blocks being low crime areas and then three sides being high crime areas.

Within minutes, you can drive from a perfectly safe space to one where you shouldn’t even get out of your car.

The New Haven Police Department has a map of the different districts.

The most dangerous ones, according to 2021 data, are:

District 1, which is the downtown area, is one of the lower violent crime rate areas, but there are a good number of thefts happening there.

So... How Safe Is New Haven Really?

The crime once ranked New Haven as one of the most dangerous cities in the country.

That was about a decade ago, but the crime is still there.

So many assumptions about Connecticut are shattered in New Haven.

Do you think because Yale is here, the city is prestigious?

Only the part around Yale is.

There are some amazing places to see here, great nightlife, and fun activities with a young, hip crowd.

There is also an underbelly of violent crimes, drug problems, homelessness, and gang activity.

It’s really worth it to find those CompStat reports on the police department website that details district by district.

The city is one of few that I’ve seen that released the 2021 crime statistics already.

Here’s how the major categories break down:

The police department is taking steps to get a handle on crime by installing crime security cameras all over town, but it’s a project that will take a couple of years to happen.

There are some cameras already installed.

You are not in imminent danger here.

You should not avoid visiting here.

You just need to study the area using the easy-to-find information about the crime to make the best hotel choices possible and be aware that big city crime happens here and the good parts of town and bad parts of town can just be a few blocks away from each other.

How Does New Haven Compare?