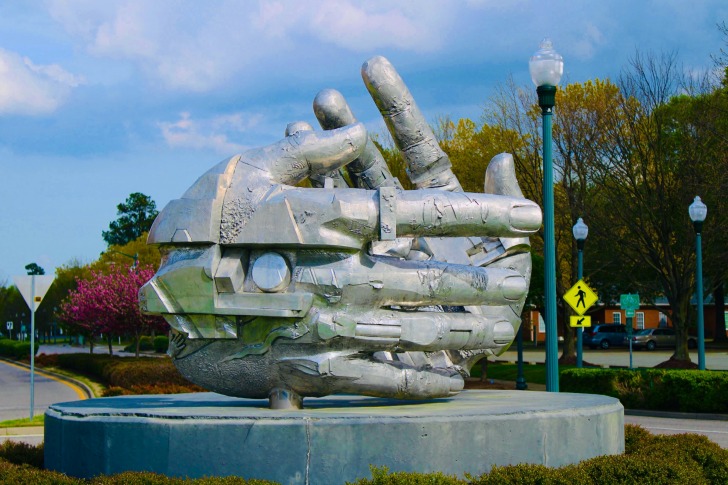 Newport News, Virginia, is a place where you can see, hear, and smell the culture of the south with a maritime twist.

Of all the things we can tell you about Newport News, there’s one thing we can’t—and that’s how the city got its name.

Even locals don’t know for sure.

The tourism agency in Newport News explains it like this:

“The most widely accepted folktale is that our city is the namesake of Captain Christopher Newport, commander of the Susan Constant, which was the flagship of the three-ship English fleet that landed on Jamestown Island in 1607.

He made several voyages to Newport News in the early days of the Jamestown Colony, bringing “good news” of supplies and settlers.”

Now back to what we do know.

The shipyards dominate the skyline while history is nestled into every street of this charming community.

The community speaks with its accent and has its oddities.

For example, Newport News sits on roughly 23 miles of shoreline, yet there’s not a hotel on the water.

That speaks to the dominance of local homes, shipbuilding, and military priorities in this working town.

The city sits on a peninsula northwest of the bigger Norfolk.

It’s a walk through history and the future, all in one 3-mile-wide city.

There's a medium overall risk in Newport News, Virginia. The city has a crime rate higher than the national average. Violent crime is 595 per 100,000 people, while theft is more than three times higher. Severe weather of all kinds happens here.

There's a low risk here. Taxi drivers here need to get a permit and there's an FBI fingerprinting process as part of the application. Vehicles get inspected once a year.

Theft is a little on the high side but is trending down, according to the Newport News Police Crime Report for 2020. We're going to give this a medium risk as the crime rate is 2053 in 100,000.

It looks daunting when you research this topic as extreme heat, flooding/flash flooding, hurricanes/tropical storms, severe thunderstorms, tornadoes, and winter storms all impact this city nestled on a peninsula. That's going to give it a medium risk. It's a good idea to have your favorite weather app handy when you visit Newport News, Virginia.

The robbery crime rate is just 92 in 100,000, so there's a low risk. Still, don't let your guard down when visiting, and keep your purse and wallet close to your body.

There's a military presence in this area with Joint Base Langley-Eustis, which could be a terrorist target. The massive shipbuilding presence here could also be a target. Due to that, we're giving this a medium risk.

There's a low risk of scams here. It's not a place where scam artists are reported often, but that doesn't mean it won't happen. Avoid giving personal information or any stranger with a deal that seems too good to be true.

Women travelers have a low risk here provided they stay in safe, touristy areas and keep their wits about them. There is a strong military presence and an active police force, making sure the historical sites are protected and tourists are kept safe.

There are no concerns or a history of problems in the tap water of Newport News, so there's a low risk. It meets all state and federal requirements. If a flood or storm causes water quality concerns, the city will send an alert out.

Where should I start?

There’s so much to explore in this community.

The biggest question from tourists is usually “Can I tour the Shipyard?”

There are security restrictions that prevent tours.

You can view it from Victory Landing Park.

There are harbor tours you can book to see some of the many other ships along the James River.

The largest stone fort in the country is located at Fort Monroe.

This was a shelter for escaped slaves in the 1860s, and you’ll walk in the footsteps of Civil War legends like Harriet Tubman, Robert E. Lee, and Jefferson Davis.

The Mariners Museum is a place to explore the way water connects the world now and through history.

This museum is so prestigious even Congress dubbed it America’s National Maritime Museum.

Cyclists will love this town with various levels of riding challenges.

A highlight is Route 1, which goes 17 miles along the shore.

You can take a more rugged trail on a mountain bike at both Hardwood’s Mill Trail and Mariners’ Lake Natural Area.

Places to Avoid in Newport News

When you look at crime maps of the area, it’s hit or miss where the dangerous parts of town are located.

Stay near the tourist destinations for the best safety measure.

Many of the locations are historical, therefore they have more security.

So... How Safe Is Newport News Really?

There’s a higher crime rate here than the national average.

The state’s homicide rate is at a two-decade high, and in 2021, Newport News had 31 homicides.

Newport News was one of six cities in Virginia to get a $300,000 financial infusion to curb gun violence.

Some of the gun crimes are suicides, another issue police and mental health officials are working on.

When visiting Newport News, see the historical sites, the shipyard, and the museums.

Enjoy the restaurants in the popular parts of town and don’t wander into unknown neighborhoods.

Stay on main roads and keep your guard up.

While it’s not an inherently dangerous town, there is enough crime data to make any visitor a little wary.

How Does Newport News Compare?