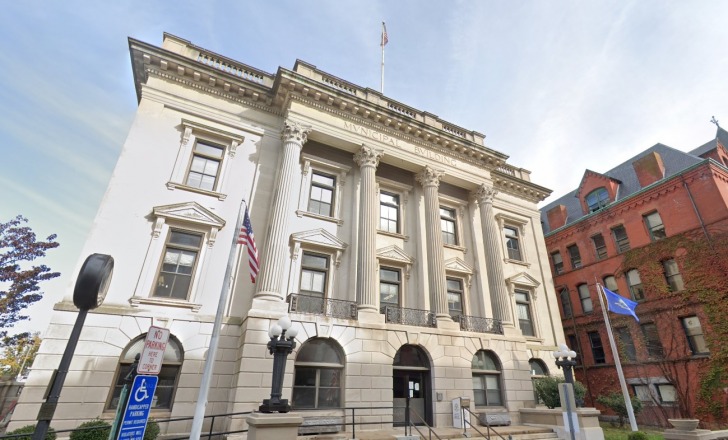 New London, Connecticut is everything to love about the state without the higher prices of more touristy communities.

This former whaling community is home to one of the deepest ports in New England.

This is the headquarters for the U.S. Coast Guard Academy and several museums are celebrating the sea business and military protection valued in this seaport town.

You can also soak in the sun seaside at Ocean Beach or cool off at the waterslide or by taking a dip in the Long Island Sound.

The Thames River lines the east side of the city and you can see Groton across the water.

Take a ferry tour to a lighthouse, Long Island, and lots of other possibilities that await.

You’ve got a lot of history to see here too.

This town was built from the riches of the whaling business, so the architecture is exquisite.

When you walk down Broad Street, you’re on the same path Benedict Arnold took as he led forces to burn down New London (what a jerk, eh?).

As much as there’s a walk back in time, you can also look to the future here as General Dynamics Electric Boat company is headquartered here and continues to build the most high-tech submarines in the world.

If that whets your appetite for more, the Naval Submarine Base New London is just across the water in Groton (No, I don’t know why.)

While New London isn’t the most decadent seaside city in Connecticut, it sure checks all the boxes of cool things to do in a more affordable range.

There's a low risk here, but you'll find articles stating this city is among the top 60 Most Dangerous Cities. Let me explain why. The city is small, with just 27,000 people. That's going to allow any crime category to be skewed closer to safety or danger depending on which way the crime numbers work out. Is it more dangerous than the average Connecticut city? Yes. Should you avoid going there? No.

You have options by land and sea here. Busses from the Southeast Area Transit (SEAT) and the Estuary Transit District are available. Railway travel is provided by Amtrack and regional company Acela Express. There are also Shoreline Express trains. You can also get a ferry ride to Long Island or Block Island. Taxis and rideshares are options as well. All are low risks.

There were just three pickpockets in 2020. One of those was actually a purse snatching and the thief got away with $1100. We can't say it enough - don't bring that much money or keep valuables in a purse. Leave the name-brand bag at home and use a less expensive one for your vacation. There's a low risk, but there's still a chance.

You've got to worry about hurricanes here, but it's not as big of a risk as the southern states have and you'd get plenty of notice. Winters are cold and snowy, but that's just part of life in Connecticut. There's low risk because almost every weather event comes with plenty of notice to get out or stay away.

Almost half of the robbery crimes were highway robberies. That means they happened in a public place. While there are just 10 public robberies, it's still a little too high of a percentage to give it anything but a medium risk. You do have to be on guard here.

There's a medium risk here as a lot of military installations are nearby. Taking out submarines and ships and hitting a deep port could be a terrorist's dream come true. New London is also close to larger cities like New York. As with any elevated risk, you can bet Homeland Security is watching this area like a hawk.

You need to worry about rental scams here since it's such a popular place in the summer. Three warning signs are; the deal is incredibly discounted, the landlord can't show proof of a leasing license, and they ask you to wire money to "secure" your rental. The safest way to book here is to contact a local rental company and have them find the perfect home for your trip. Other than that, there's a low risk.

Walking around during the day should be safe enough, but I wouldn't walk around here at night alone or with a friend. There are some dangerous neighborhoods too, so make sure you know exactly where you are going and stay on the main roads to get there at night. It's a low risk but proceed with caution.

After reviewing the 2020 Annual Water Report, I can tell you there were no reported violations and New London Utilities is proud to tell you the water meets or exceeds all required standards.

Fort Trumbull State Park is a great place to start and, in breaking with Connecticut parks traditions, the cost to get in is the same for locals and non-residents.

This is the sight of many battles, including part of the day in 1781 when Americans lost the battle and New London was burned to the ground.

Stop by the Old Town Mill next (aka Winthrop Mill) and see the re-creation of a mill house that was also burned down that fateful day.

There’s a harvest festival here each year and tours are offered on various days throughout the year, but check before you come as the hours are still getting figured out due to the pandemic.

The Thames River Heritage Park is right on the river and you can choose from tours that last half a day to ones that go all weekend long.

There are water tours on massive sailboats or just walking tours if you don’t have your sea legs just yet.

There is a lot to do at Heritage Park, so research in advance so you aren’t arguing at the ticket counter about which tour you want to do.

During the summer, a trip to Ocean Beach is a must.

(I really wish I could use the “shrug” emoji on that one because I don’t know why you need a pool next to the sea, especially when it costs $10 extra dollars to swim in the pool.)

I’m told you should try the clam fritters at the Boardwalk Galley but I need a “yuck” emoji for that one.

Let me know if you liked them.

The New London Harbor Lighthouse is a treasure on the coast.

It’s open to public tours by appointment only, as of most recently.

It’s said that at the top of this lighthouse you can see more lighthouses than any other lighthouse nest in the world.

You can also go on a tour of the Ledge Lighthouse, which is in the middle of the sound.

It looks like a miniature stately home in the water.

Legend has it, some of the more uppity influencers in town didn’t want the boring old lighthouse look that was tall and lean.

So they came up with this architecture.

Places to Avoid in New London

The place where Benedict Arnold attacked is among the most dangerous parts of town to this day.

Seriously though, the central part of the city downtown until it meets on the west side with Williams Street is the highest crime area.

The more on the outskirts of the city you are, the safer it gets.

Even the beach area is among the lower crime areas than downtown.

You want to avoid getting into any verbal argument with anyone here.

There are a lot of triggers in the world today, from war to politics to gas prices.

This isn’t the place to stand your ground.

Just mind your own business, be polite, and enjoy yourself.

While there is some nightlife here, it’s best to stay off the streets at night if you don’t know exactly where you are going.

So... How Safe Is New London Really?

You’re going to read a lot of stuff telling you to avoid New London and there are “better” places to go.

You do have Groton over the river and then the amazing Mystic just on the other side of Groton, so you’re actually in a perfect location.

New London has some classic charm but a little more dirt on its boots.

Crime isn’t the best or the worst.

It fits nicely in the middle.

Here are the risks of top crimes:

The main thing to be worried about is the crime that happens against strangers here.

Most communities have an abundance of crime that is domestic.

Robbery and violent crimes here are almost split down the middle.

You will still need to lock the car doors and roll the windows up.

You should not walk around with a large, expensive purse or put out a wallet brimming with cash.

There’s a crime in this small town.

There’s a little grit too.

There’s also a lot to explore and enjoy with plenty of “tourist traps” nearby.

How Does New London Compare?