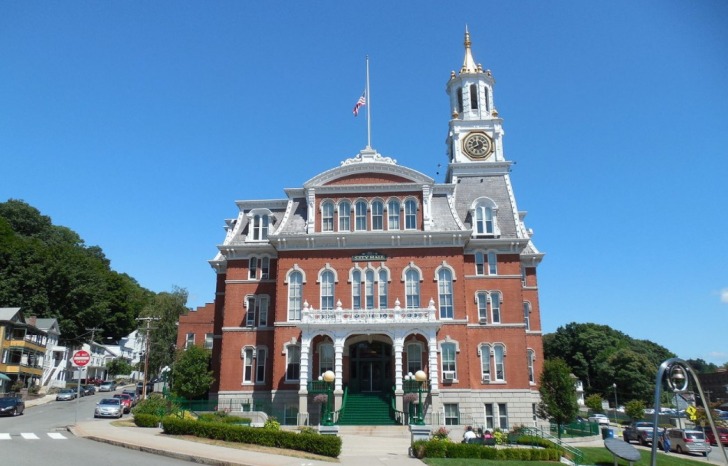 Stop and smell the “Rose of New England” in Norwich, Connecticut.

This historic town comes with stories of bravery, tragedy, and even some reported hauntings.

The stories I’ve found researching this city make it all the more appealing; an abandoned state hospital for the mentally ill sitting solemnly on the side of a road yet hauntingly beautiful, a beautiful waterfall area that tells the tale of Native Americans who jumped to their death and the two men who made the seemingly impossible leap, and a now serene pound that once broke from its shores and sent a wall of water, ice, and debris 10-13 feet tall through the city streets with little notice for residents.

Several rivers meet here and turn into one bigger river, the Thames, which eventually makes its way to the Long Island Sound.

Every bit of charm Connecticut could hold is nestled in this inland city of 40,000.

You can’t drive through the streets without feeling like you’re transported to the late 1800s.

The mysteries of the majestic buildings make a visit here well worth the trip, and if you need a good book for the trip, purchase ‘A Swift and Deadly Maelstrom: the Great Norwich Flood of 1963, a Survivors Story.’

There's a low risk here, but it's not a simple and safe small town. There are pockets of crime to discuss. The crime risk isn't worth worrying about beyond basic safety measures.

The local bus services are Southeast Area Transit (SEAT) and Windham Regional District. The closest rail line is in New London. You can also get taxis and rideshares. There's low risk with any option, but a car would be ideal here.

No pickpockets were reported in 2020 crime data, so there's a low risk for travelers.

You'll face snowstorms or blizzards in the winter, and snow can pile up fast. The city is well-versed in handling snowstorms, as these happen several times each season. In summer you can get the occasional thunderstorm, but the real risk is if a hurricane makes its way up the New England Coast and comes inland. There's a low risk in general, as the biggest risks come with plenty of warning to get out, hunker down, or cancel the travel.

There were just 14 robberies in 2020, but eight of them were against people in public places. It's a low risk since the number is so small, but it's not risk-free by any means.

Given the proximity to New York, Boston, Hartford, and New Haven, it's medium risk. Norwich wouldn't be a direct target but could have some aftermath impact of a terrorist attack.

The scams around here are made to local phone numbers, so there's a low risk of being impacted as a tourist.

Women should feel safe traveling here with a low risk of any danger. There were 14 rapes reported in 2020, which is just about the national average. Just because the risk is lower doesn't mean you should let your guard down at all and avoid walking around at night.

There's low risk because the water has no violations as of the 2020 water quality report and it meets or exceeds all standards.

Safest Places to Visit in Norwich

It has trails that each walk you through a part of the city’s history.

There’s the Millionaires’ Triangle Trail that takes you through some of the most majestic and historic homes in town.

The Uncas Leap Trail is as sacred as it is rooted in history with stories of Native American battles in this area of waterfalls and rock ridges.

Infamous traitor Benedict Arnold grew up in Norwich and a trail goes through some of his historic landmarks in the area.

The Mohegan Sun Casino Resort is just four miles away in Uncasville and it is one of the top attractions in all of Connecticut.

There’s golf, a spa, kid’s activities, a sportsbook, and a full casino here.

Mohegan Park is the Central Park of Norwich with a pond, skate park, and a two-acre rose garden.

Summer is the best time to view the stunning roses.

There’s a boat launch in the center of town near Franklin Square.

The city has a live webcam so you can see the traffic waiting to get on the water.

This is a great section of town to wander around during the day and see the stunning architecture mixed with the background of nature.

Places to Avoid in Norwich

Generally, the busiest part of a city has the most crime, and Norwich is no different.

Downtown near Franklin Square has the highest crime rates, as does the area just north of there.

Outside of that small area, the crime rates are very low.

You don’t have to avoid the more crime-ridden areas, as the crimes here are still below the national average.

There are some sacred, scary, or just plain sad places here you should know about before visiting.

One story is the flood of 1963, which was so much more than a flood.

The natural dam burst at Spaulding Pond sending a torrent of water filled with ice chunks the size of refrigerators and loaded with rocks and trees rushing through the downriver parts of the city.

Five of them were on the second floor of a factory, convinced they were high enough to avoid floodwaters, but the wave hit the mill, causing it to crumble.

The sixth person who died was trying to escape the flood.

She left her home with her husband and three children.

They ended up driving right into the wave of water, and the mother was able to hand over her three sons before she was carried away by the floodwater.

Her body was found the next day.

Her family still tells the tale of that horrible day.

The old state hospital sits on a piece of property just off the side of the road with grass and weeds filling the once immaculate landscape.

It has a prime position on the Thames River but has been closed since 1996.

The building is mostly empty but is an attraction for ghost hunters and squatters.

A video tour inside the home I watched showed it’s a dangerous place to be and you have no business going there.

Hence, why I’m not providing the address.

Safety Tips for Traveling to Norwich

So... How Safe Is Norwich Really?

The violent crime rate is twice as high as the Connecticut average, and I wanted to dig into that a little more to give you perspective.

There were 134 violent crime incidents in 2020. 25 of those were against strangers.

Here’s where those incidents came from:

The data given to the FBI doesn’t break down the details of the aggravated assaults aside from listing them as violent crimes.

We know that none of the homicides were strangers.

This isn’t one of the more dangerous cities in the state, but it’s also got a fair share of it for a smaller city.

The crime concerns here are nothing that good safety practices can’t fix.

The crime data also shows things like aggravated assault which might have started as a robbery but escalated to an assault.

Don’t ever fight back to keep a wallet, purse, backpack, or car.

It’s not worth risking your life.

How Does Norwich Compare?