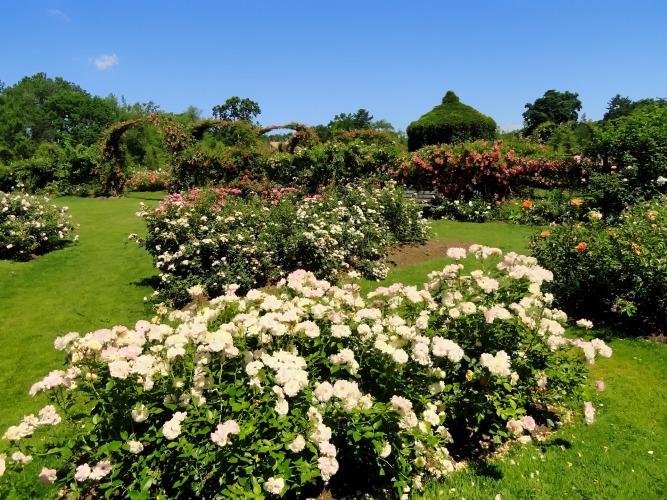 West Hartford, Connecticut is a bedroom community halfway between New York and Boston and just to the west of the state capital of Hartford.

If you’ve ever had to use Webster’s dictionary, you’ve experienced a slice of West Hartford.

The home of Noah Webster is one of the top draws in this community.

It’s that note of history blended with a modern style that makes West Hartford feel comfortable and regal at the same time.

This is one of the foodie secrets that’s quickly getting out.

The opening of Blue Back Square has brought contemporary dining front and center and is standing out from nearby cities.

11 of the restaurants in West Hartford made the list of best in the state.

There’s a World of Beer if you need something to wash it all down with.

There are European and Asian grocery stores here too, paying homage to the diverse community of West Hartford.

All that and you get to walk through a life-sized replica of a sperm whale!

There's a low risk here. The crime rates are low and just 30 violent crimes happened in the whole city of 64,000 in 2020. This is a family-friendly town and pretty low-key. There's not a lot of trouble to find here.

CT Transit is the public transportation service through West Hartford and surrounding areas. Taxis or rideshares might be a better option just because it's faster. There's a low risk in all forms of transportation.

No pickpockets in 2020 and the majority of thefts were either shoplifting or things stolen out of cars. You have a low risk of getting pickpocketed, but your car has a much higher risk if you don't lock it up.

There's a low risk of a lot of things going wrong with mother nature here. Summers can bring extreme heat, tornadoes, drought, and hurricanes (or remnants of hurricanes). Winters bring blizzards, ice storms, and extreme cold. You aren't in tornado alley here, so any tornado wouldn't be very strong, and a hurricane would have been whittled down to a tropical storm most likely since West Hardford is inland. You should be aware of the dangers, but there's no overwhelming threat of a particular one. It will snow a lot in the winter, there's no getting around that.

There were 22 robberies in 2020 and surprisingly not a single one of them was in public. That's good news and a low risk for tourists.

I would call it the lowest end of medium risk here. It's in a largely populated area, but West Hartford isn't going to be a direct target. Being so close to New York City and Boston, there's enough concern to raise the risk level a notch.

There has been a recent rash of "check washing" scams, where thieves wash off the ink from a check and write in their own amount. Accounts can get quickly emptied before the victim even realizes it. The easy way to solve this is don't bring your checkbook with you and you'll have a low risk of getting scammed. Credit cards offer much better fraud protection.

Women have a low risk here and there's plenty for them to enjoy here. It's a laid-back town with a sophisticated vibe. The usual "after dark" cautions still stand, so don't walk around alone at night, and if you've had too much to drink, don't let a stranger take you back to the hotel.

The water here is safe to drink, according to the latest water quality report. Reading it I learned that the water here is treated partially by being filtered through sands and stones that catch nasty bacteria and other unhealthy elements. I thought that was kinda cool!

Conny the Whale has been entertaining children and parents for decades at The Children’s Museum.

The sperm whale is the state animal of Connecticut.

We should also pay homage to the man who helped us learn how to spell at the Noah Webster House & West Hartford Historical Society.

You can take a tablet-led tour through the home dating back to the 1750s.

Blue Black Square is the most popular gathering place in town and it’s popular day and night.

I mean to tell you, I’m writing this and looking at all the food there and it’s making my stomach growl.

It’s not necessarily going to empty your wallet either, as there are restaurants at all price points.

Westmoor Park is a traditional city park with a twist.

It has a demonstration farm and an education center with live animals and seasonal flowers all available for viewing.

There are classes you can take there, but otherwise, this park is free (they do take donations).

In Elizabeth Park, follow the smell of roses to the Helen S Kaman Rose Garden.

You’ll see more than 200 rosebeds and the map of the garden looks like the layout of a major league stadium.

This is really an embarrassment of rosey riches and it’s also yet another free attraction in West Hartford.

Places to Avoid in West Hartford

There aren’t places to avoid in West Hartford, but crime maps show the highest crime rates are in the southeast section of the city and south of I-84.

Even if you go a little further east and end up in Hartford, the border area of the two cities is very safe as well.

Hartford crime numbers don’t get higher until you get to the central part of the city.

Avoid coming here in winter if you are not used to driving in snow, and make sure you have an AWD vehicle if you are driving around.

You can rely on rideshares or taxis, but there is no guarantee those vehicles will be any better driving in the snow.

So... How Safe Is West Hartford Really?

There have been just four homicides in the past decade.

The theft numbers look high at 1417, but 599 of those were shoplifting thefts.

Another 454 were thefts from cars.

Car thieves are looking first and foremost for unlocked vehicles with the windows being rolled down, so if you lock up the car you’ll have less chance of being a victim of a car break-in.

Almost half of the reported robberies were in a house and none were against strangers.

Some places in Connecticut aren’t very safe, and some are extremely safe.

How Does West Hartford Compare?