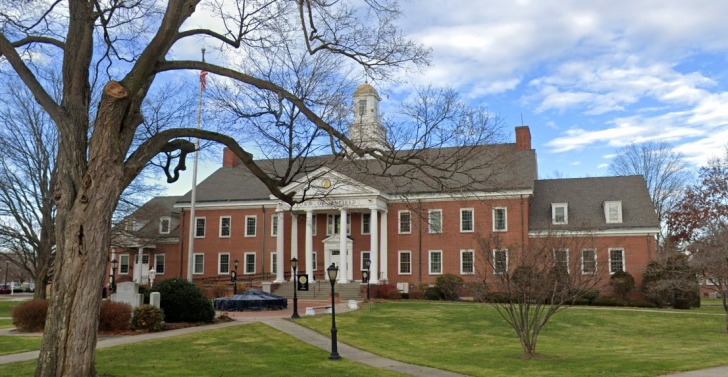 Enfield, Connecticut, is bordered by the Connecticut River and Massachusetts, leaving a world of possibilities to explore between two states and various terrain.

This town was the home of Lego for many years, but the company has shuffled around resources leaving no visible presence of Lego in the community, a heartbreaking move for those who loved seeing the giant legos outside.

It’s also home to Brooks Brothers and is one of the largest employers in the community.

Enfield is another historical city in a state marked by an incredible history.

An entire district here is filled with homes from the 18th century and takes on a wide variety of styles.

They didn’t just stick with Victorian homes in Enfield.

The only hotels a tourist is going to find in this spread-out suburban town are along I-91.

The rest of the community is filled with homes, outdoor activities, and traditional American shopping areas.

Being just 10 miles from Springfield, Massachusetts, you’ve got a lot of bigger city options to explore here as well.

There is something about this town that caused me to have nightmares last night.

In all honesty, I started working on this story last night but I was so freaked out I had to step away and then was haunted by bad dreams.

What scared me so much?

Stay tuned and find out.

There's a low overall risk, especially when it comes to violent crime. This is a family-friendly city and not designed around tourism, but welcoming to any newcomers.

You'll be able to say you rode a Magic Carpet if you take the public bus system here, and that's the name of it. There are two routes, one that goes north/south and one that goes east/west. You can also call a taxi or rideshare. All options come with low risk.

Five pickpockets or purse snatching were reported in 2020 with a hefty steal of $2671. While five is still a low risk in a town of 42,000 people, it's a great reminder that even quiet suburban towns face petty crime risks. With the average loss per pickpocket being more than $500, remember that when you're determining how much money to put in your wallet or purse.

There is a low risk of a major disaster happening in Enfield, but there are some weather concerns to understand when visiting here. Winters are going to be cold and snowy. The city gets an average of three feet of snow a year. Spring and summer bring thunderstorms which can get severe with the occasional tornado. When tropical weather threatens the northeast, the hurricanes can move inland. While they get downgraded, they can still dump a whole lot of rain, leading to flooding. The good news is that with most weather events here, you'll get plenty of notice that it's coming.

With just 13 robberies reported in 2020, there's a low risk of being mugged. This isn't a violent city in any category compared to state and national averages.

Enfield itself isn't going to be a target, but there are some larger cities nearby that put it at medium risk. Terrorists like to go after largely populated areas and Enfield might be a small town, but it's in a large region with a lot of people.

The most recent scam involves people claiming to be with law enforcement and demanding money. While many of these scams happen over the phone line, be aware of this trend. If anyone claims to be a police officer and asks for money, ask to see a badge and then call to confirm it's an officer. While it's a low risk, it's still worth knowing.

There's a low risk for women visiting Enfield. There were five rapes reported in 2020, but none were against strangers. It is wise to avoid meeting people online in a private place. Keep the visits in public and if you're exploring the wilderness in Enfield, let someone know where you are going and when you'll be back.

I reviewed the 2020 Annual Water Quality report and no violations were reported. The water meets all necessary standards and comes with low risk.

Safest Places to Visit in Enfield

The Enfield Historical Society is a great place to start, so you can learn about the history and know what to look for during your visit around town.

There are three museums to explore and they are all free to locals and tourists.

Easy Pickin’s Orchard is a great place to visit where you can pick your own fruits and veggies and explore the farm.

You can also look for their products at any farmer’s market you come across.

Riverside Reptiles is a great family fun event that’s also safe, provided you don’t upset the alligator or the snakes.

Seriously, this is a great way to learn about reptiles, snakes, and alligators in a safe environment and see them up close without the risk of getting hurt.

Scantic River Park runs through Enfield and is a perfect place for fishing, hunting, or hiking.

It’s along a much smaller river than the Connecticut River that lines the east side of town.

It’s also free to park here, which I can tell you is very rare in Connecticut.

Six Flags New England is a theme park just across the state line and on the other side of the river.

It has rollercoasters and rides for all ages and thrill tolerance.

One bit of advice – cross the Connecticut River in Enfield or else you’ll have to double back using I-91.

Places to Avoid in Enfield

If you took an “L” and turned it right 90° then tucked it into the upper northwest corner of the city, you’d have a look at the areas with the highest crime rates.

It’s not shocking that a city would have more crime along an interstate corridor as that’s quite common.

However, there’s not a lot of crime to begin with, so high-crime areas are still safer than some other communities.

Thompsonville is historically known as the “bad” part of town, and it’s a little more rundown than other parts of the city.

As with all Connecticut cities, there is a drug problem here and a lot of the arrests that happen related to drugs are in T-Ville, as the locals call it.

Now to the nightmare that haunted me all night.

There is a house in Enfield called the “Demon House.”

Goodness gracious, I got goosebumps just typing that.

This is not a tourist attraction and you’d never know it was there if you didn’t research it.

The “Demon House” has long been a place where reportedly many people have died and ghosts still haunt it, including one particularly angry demon.

I don’t know if you are into haunted places or not, so I won’t go into much detail.

I did read a ghost hunter play-by-play overnight visit and it scared the bejesus out of me, and I’m not one to give into ghost stories or demon entities.

Just avoid this house, or if you do research it yourself – just drive by.

Don’t knock on the door as the people who live there have enough to deal with.

Safety Tips for Traveling to Enfield

So... How Safe Is Enfield Really?

I’ve done a lot of research on Enfield and it seems the biggest complaint that keeps coming up is car break-ins, thought to be motivated by drug users looking for anything of value.

The crime statistics back that up with 45% of all thefts related to car break-ins.

Another big theft category was shoplifting.

I tell you that because you’ll see that “Theft is way above the state and national average”, which is true.

However, you now see that when you take things like shoplifting out of the equation, the actual risk for a tourist goes down.

The chances of being a victim of a violent crime are one in 752.

Only five of the violent crimes were against strangers.

This is a small-town and safe community, with Thompsonville being the only concerning crime spot in town and there’s a greater risk along the I-91 corridor.

That also happens to be where all the hotels are, so just be extra cautious when parking and take everything out of the car and inside with you.

One man reported that even his daughter’s sippy cup was stolen.

How Does Enfield Compare?