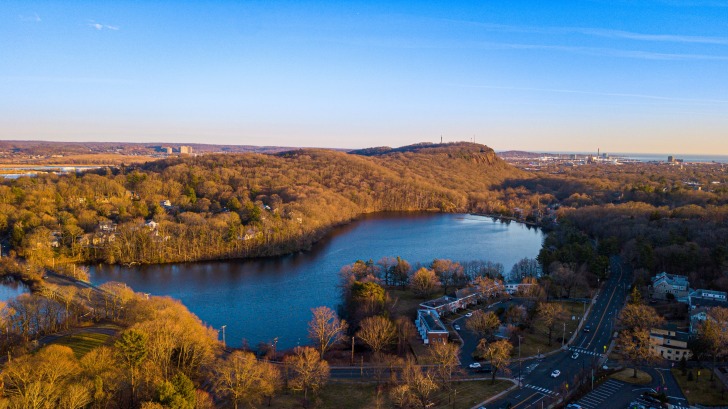 Hamden, Connecticut, is the “Land of the Sleeping Giant” and home to one of the most haunted roads in the country.

That’s quite impressive for this diverse city of 61,000 people who might otherwise get a little bored with suburban life.

But seriously, this town has a lot of history, folklore, and future potential.

It’s home to Quinnipiac University and considered a suburb of the larger city of New Haven to its south.

The city has several museums that bring awareness to different cultures from around the world, parks are abundant in the wilderness surrounding the city, and you are less than 30 minutes to the beach.

You can also learn about Eli Whitney (remember him from history class in high school?) who invented the cotton gin and went on to forever influence how we manufacture goods in America.

The “Sleeping Giant” reference comes from the hills on the north side of the city that sort of look like a giant lying down sleeping.

There’s also a stone observation tower at the top that gives breathtaking 360° views of the region.

This is a diverse and inclusive community for those thinking that all of Connecticut is in a caste system.

You have the quiet of the suburbs, a college town vibe, with a bigger city close by, incredible outdoor adventures, and the beach just a short drive away.

What else could you want on a vacation getaway?

There's a low overall risk but there is an edge to this community. It's not the safest city in the state, but when you really dig into the crime numbers you see some perspective on why certain categories are higher and what you can do to avoid being a victim.

The public bus system is the Connection Transit New Haven line. You can also get taxis and rideshares here. There's low risk with any option, but having a car is preferred, so you can explore more parts of the city.

There's a greater risk of getting a purse snatched than being pickpocketed. Six purse snatchings were reported in 2020 with an average cost of $52 per crime. Just one pickpocket was reported. While the overall theft rate is much higher than the national and state average, there's still a low risk. Seven crimes in a city of 61,000 people aren't too concerning.

People here will tell you of the devastating tornados of 1989 across its region, but that's a rare occurrence. You'll get thunderstorms and a possible tornado in the warmer months, and you've got to expect snow in the winter with the occasional blizzard and snow emergency. None of this rises to a huge risk of a natural disaster, so we'll call it a low risk, but be prepared by studying the emergency management section of the city's website.

There's low risk in Hamden. 22 of the 72 robberies reported were in public and the average take was $30. You should never fight for your belongings when a weapon is being used against you. On the off chance it does happen to you, try to remember as much as you can about the suspect so you can be a good witness afterward.

There's a medium risk just because of how close this area is to New York City. While Hamden itself isn't a hard target, there might be residual impacts if a terror attack happens in NYC. Terrorists like high population areas, so this entire northeastern corridor is going to be a medium risk.

There's a recent warning from police of the five most common telephone scams, but it's geared toward locals and none of them is particular to just Hamden. There's a low risk here.

There's a low risk for women traveling here, but with crime numbers being about average compared to national numbers, it's certainly not a place to let your guard down. You should also use caution at night, as you would in any city. Don't walk around alone or wander into neighborhoods you aren't familiar with.

Safest Places to Visit in Hamden

Sleeping Giant State Park is among the top three things to do when visiting Hamden.

The admission price is going to cost you up to $15 for non-residents, but you’ve got a world of wonder ahead of you after you park.

There’s hiking, fishing, natural trails galore, picnic areas, and the best view from a lookout tower you can get in Connecticut.

The Eli Whitney Museum is a great place to enjoy learning about the industry-changing inventions Whitney made right here in Hamden, using the power of the river to fuel the first American factory more than 200 years ago (1798, to be exact).

On the campus of Quinnipiac (“kwi·nuh·pee·ak”) University, which is a sight to see in itself, is Ireland’s Great Hunger Museum, documenting through art the Irish Famine that started in 1845.

On the other side of town, you have the Palestine Museum to explore with an inclusive experience to learn about the history and achievements of the Palestinian culture.

You can read more about the experience in nearby New Haven in our article “How Safe is New Haven for Travel?”.

Places to Avoid in Hamden

Crime maps show the highest crime levels are near the city line where it meets New Haven, between Whitney Avenue and Wilbur Cross Parkway.

The area south of Wilbur Cross Parkway as it runs through the city also has higher crime areas.

It’s not uncommon in larger cities to have more crime along the freeway, so that’s not really a shocking point.

Here’s something I don’t know if you want to avoid or not, but I’ll just give you the facts.

There’s a place called Downs Road that once ran from Hamden to Bethany.

About two decades ago, a certain stretch of the road was abandoned and blocked off to road traffic.

However, people still wander into this empty wilderness that gives off the eerie vibe of the Blair Witch.

There have been reports of screams heard deep in the forest, a sense of someone watching, apparitions of children, an albino horse, and a Yeti-like version of a monster.

Visit if you dare, but you’re supposed to get a permit before you go.

Safety Tips for Traveling to Hamden

So... How Safe Is Hamden Really?

The crime rates here are higher than the Connecticut average in just about every category, including personal and property crime, which is both about 45% higher.

Some of the crimes tell a different story when you break them down.

This is a one in 55 risks of being a theft victim.

Now let’s take out the shoplifting thefts, which aren’t going to be a tourist risk.

Now let’s assume you’ve locked up the car, left the windows rolled up, and don’t have any valuables in the car.

We will subtract all the thefts involved in car break-ins.

I like to break these numbers down for you so you can see that part of the risk when traveling is highly dependent on how safe you are.

There’s an overall one in 320 risks of being a victim of a violent crime.

However, data shows that just 21 of the violent crimes were against strangers.

This is an average suburb with average amounts of crime connected to a larger metro area with a crime of its own.

It’s not overly dangerous, but do not let your guard down in Hamden.

How Does Hamden Compare?