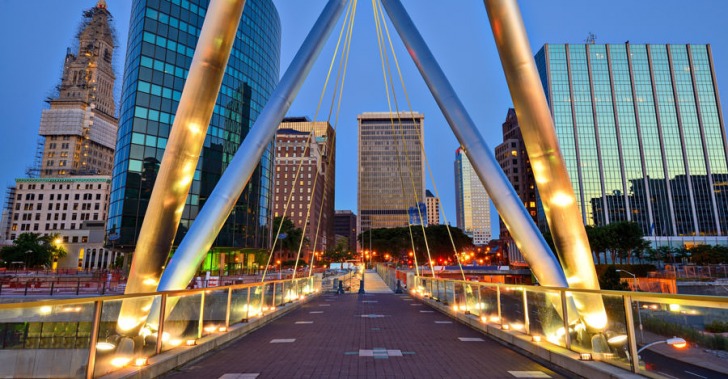 The nickname “Insurance Capital of the World” doesn’t quite do justice to the storied legacies that are rooted in Hartford, Connecticut.

The state’s capital city has so much history that you could spend an entire vacation just learning about the past to enjoy the present.

Hartford was founded in 1635 and went through many ups and downs, rising to a wealthy city that was the envy of the northeast to a poor city with a 28% poverty rate as it stands in 2022.

Forget everything you assume about Connecticut being a home for the upper echelon of society because those cities aren’t near Hartford.

The city has a history of racial disparity, government trust issues, and poor financial planning, despite being one of the top insurance company locations in the country.

While the economy eroded around Hartford, the classical history of the city stood preserved and treasured – a beacon of what once was and could be again.

Sitting on the banks of the Connecticut River, Hartford is flanked by East Hartford and West Hartford.

Each is its own city with its own rules.

The diverse community has a majority of African Americans and Latinos/Hispanics, with Caucasians making up for 15% of the population.

This leads to many cultural attractions and dining options, breaking the WASP (White Anglo-Saxon Protestant) assumptions many who’ve never been to Hartford assume about Connecticut as a whole.

There's a medium overall risk in Hartford. Even when the city can celebrate a year of lower crime rates, like 2021 compared to 2020, the crime rates soar again in 2022. The crime levels in Hartford surprise those who don't know the dynamics of the entire state of Connecticut.

Hartford has buses and rail lines to get around the metro area and the state. Dash is the free bus that takes people around downtown Hartford. Amtrak can take you to larger East Coast cities. For example, New York City is a three-hour ride. Taxis and rideshares are readily available, and plenty of rental car locations are open too. Worker shortages can suddenly alter bus routes, so it's safer and smarter to use a car to get around, whether you rent or rideshare.

Hartford Police are transparent with crime data, but more from a 10,000-foot view. They don't go into the weeds for pickpocket statistics. What I can tell you is that the theft rate here is 30% higher than the national average. Treat this as medium risk and keep your purse or wallet out of sight and close to your body.

Winters can be brutal with a lot of snow, ice, and bitterly cold temperatures. This area can also get hit by hurricanes that make their way up the eastern seaboard. Severe thunderstorms and tornadoes are possible, but tornadoes aren't as likely as in other cities in the South or Midwest.

According to 2021 crime data, the robbery risk is 40% higher than the national average. However, in 2022, the robbery rates are up nearly 50% as of September. Treat this with medium risk and never fight back if you are confronted by a robber. I read a really good piece of advice in a safety article yesterday about robberies. While you should always comply with a robber's demands, don't try to be "too helpful." For example, if they say, "Give me your money!" don't offer a "Do you want this valuable watch too?" Only do exactly as you are told.

There are much bigger potential targets in the Northeast, and Hartford is a small city with just more than 121,000 people. There's a lower risk here than in many other cities, but being a state capital could attract some unwanted attention. Always be vigilant and report any suspicious activity to local police.

There's a low risk of being a target of a tourist scam, as many fraudsters here target locals. You'll likely be panhandled by homeless people, but don't donate any money to individuals. If you want to help, donate to a local shelter.

Women have the same medium risk as men. If you stay in tourist areas and safer districts, you shouldn't have many safety concerns to overcome that can't be handled with common sense and situational awareness.

The 2021 Water Quality Report shows full compliance with all standards and no violations. You should only be concerned about water quality if flooding happens during your visit.

Safest Places to Visit in Hartford

A great place to start is the Hartford History Center, where you can learn about the rich history of this community.

It will help give a great perspective on some of the districts you’ll visit.

The Connecticut Historical Society is another wonderful place to learn about the state’s role in the development of the United States.

The Ancient Burying Ground dates back to 1640 and is the historical location in the city.

While it might sound morbid to tour a cemetery, you’ll see unique headstones from the past 400 years or so and learn more about the city’s history.

Another spot to learn about cultural history is the Ukrainian National Home, which has been in Hartford for more than half a century.

You’ll find unique boutiques and local ethnic restaurants while taking in the sights and sounds of this historical slice of the city.

Check the calendar of events for this district because many festivals and fairs are held throughout the year.

The Harriett Beacher Stowe Center is where the “Uncle Tom’s Cabin” owner lived for two decades, and you can tour the house as it was in the 1800s.

The Mark Twain House and Museum are where he penned literary gems, like the story of Tom Sawyer and Huck Finn, and it’s also open for tours.

The Connecticut Science Center is a family-friendly attraction that’s more about the future of science than the history of the city.

One of the tourism site statements made me laugh – “You can try to make a computer fart.”

Get ready for fun hands-on exhibits and movies in a 3D theatre.

Hartford also has several parks, some that run along the river, others that take you through sculpture displays, and yet others that go through elaborate gardens.

Places to Avoid in Hartford

The two main neighborhoods to avoid are Asylum Hill, west of downtown, and Clay-Arsenal, north of downtown.

There are other pockets of high-crime areas, so it’s smart to stick to major roads and interstates while only visiting the neighborhoods with the big tourist attractions.

There’s a location on the tourism site for the Underground Park River.

I’m not even going into a lot of detail because I don’t want it to sound attractive.

Bottom line – this is a covered-up river that once ran through the city.

It was polluted, stinky, and disease-spreading.

That’s why the city intentionally buried it out of sight and unable to make anyone else sick.

Don’t go into the tunnels.

A legendary serpent named Connie has been spotted in the Connecticut River, much like the Lochness Sea Monster.

Tales of Connie’s appearance go back centuries, so don’t expect her to show her 100-foot-long slithering self to you.

It’s just wise to know about these kinds of urban legends when visiting a new place.

Safety Tips for Traveling to Hartford

So... How Safe Is Hartford Really?

Hartford is usually ranked the most dangerous city in Connecticut, and if it does take the top spot, it’s always in the top 3.

Until the city can fix systemic racism, disenfranchised communities, and poor financial management, Hartford will struggle.

There are several layers to the problems that put Hartford in such a crime-ridden category, but instead of assigning blame, we can only hope future leaders do better.

You’re in a safer position if you stay in East Hartford or West Hartford.

While there is a crime in those cities, it’s not nearly as high as in Hartford proper.

Hartford has crime in every neighborhood, but if you stay in the tourist areas, you’ll likely face petty thefts and car break-ins, which is an easy problem to solve with rigorous attention to locking doors and rolling up windows.

You should also never leave personal belongings in the car.

If you are renting a car, ask the representative what they do to protect against catalytic converter thefts, as that’s another big issue in Hartford.

For the most part, you might not even notice an elevated crime rate if you stay out of the dangerous neighborhoods.

It’s not that the crime rate here is so shocking; it’s that the city is small and still has a high crime rate.

How Does Hartford Compare?