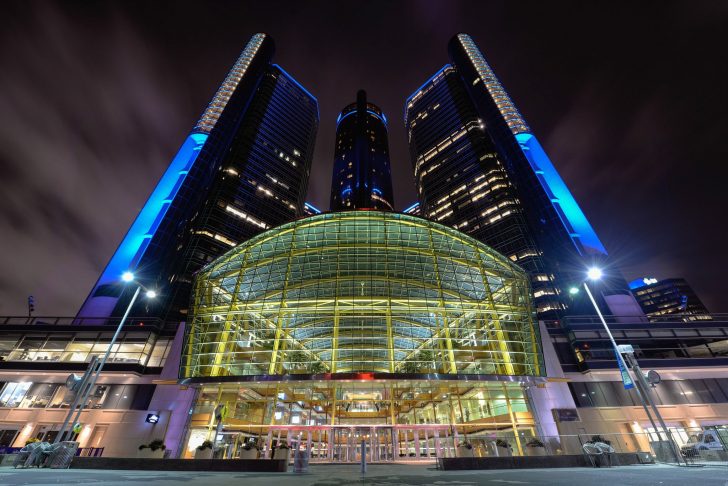 Detroit, Michigan, made the list of “World’s Greatest Places” by Time Magazine in August of 2022.

“There’s something magical about experiencing the birthplace of the American automobile industry, exploring the legendary Motown music scene, experiencing the delectable culinary creations, and so much more that the city has to offer,” David Lorenz, Vice President, Travel Michigan, commented when hearing about the Time award.

This city is gritty in many ways, symbolic of hard work and blue-collar jobs that keep Americans moving.

There’s an ethnic mix here, with 77% of the city being African American, 8% being Latino/Hispanic, and 11% being Caucasian.

Asians make up 2% of the population as well.

The Detroit River runs on the city’s Southside, where you can cross over into Canada.

Yes, a fun trivia fact is that this is a place where you technically go south to cross the northern border.

Lakes Huron, Erie, and St. Clair are all nearby.

There’s also an island and beach to explore here, though definitely don’t go there in the winter.

The city is split into different neighborhoods, all spanning out from the downtown core.

Macomb is known as the “Eastside” and has great access to the water and surrounding nightlife and shopping.

Oakland is a suburban oasis that’s more relaxed while still having an elegant chic about it.

Wayne is the cultural southwest side of the city, with various ethnicities having a strong presence and an Avenue of Fashion on top of that.

There is really no getting around the medium risk in Detroit. Crime rates, even with a decline in 2021, are still extraordinarily high, and 33% of the city lives in poverty. Hollywood hasn't helped Detroit's image with hit movies like 8 Mile. It is not a city too dangerous to visit, but you do need to do research, and we'll walk you through all the risks in this article.

Download the Park Whiz app if you have a rental car here, as you'll need to find a parking spot in advance. Public transportation includes buses, trains, light rail, street cars, and shuttles. VisitDetroit.com has a long list of transportation methods, along with prices and routes. You can get anywhere in the city or the suburbs using one of the public systems, but taxis and rideshares are readily available. All come with a medium risk due to high crime rates, and car thefts were up 24% in 2021. There were 216 carjackings as well, so even having your own car doesn't lower the risk.

There's a medium risk here, too, though this is a good news/bad news situation. The good news is, the pickpocket and purse snatching rate isn't as high as in other major cities. The bad news is that criminals would rather take things by force than by manipulation. Either way, always carry only the minimum items you need and keep valuables out of sight.

Winter is brutal in Detroit, but if you're from a place that gets really cold weather you might not notice it that much. Spring can bring tornadoes, but places farther south in the Midwest get more aggressive storms. Flooding is also a risk with so much water nearby. There's a medium risk here, and don't come for winter unprepared for frigid temperatures.

The robbery rate is three times higher than the national average, so there's a medium risk here too. Never fight back against a robber in general, but especially in Detroit.

Since it's such a big city with a large industrial presence, there's going to be a medium risk. As recently as 2022, several terrorism-related plots were thwarted by ongoing efforts by the FBI and Homeland Security.

There are a lot of fraud and scam rings in Detroit. While most are focused on locals, there are rental scams and stolen credit card activity that should make you use the utmost caution. Also, don't buy items from people on the street or out of a car trunk. These are usually things that appear to be high value, like gold, but at a deep discount. Once the person finds out the gold is fake, they have no way to get their money back.

The sexual assault rate is three times higher than the national average, but for overall violent crime, a woman is just as likely to be a victim of a crime as a man. You should never walk around Detroit alone at night, even on a well-lit street. Stick to rideshares or your own car, and never hesitate to ask a security or police officer to walk you to your car or back to your hotel.

There was one water violation in 2021 that was related to a filter issue. The problem has been resolved, and there was no risk to the public. All other categories were in full compliance, and there's a low risk. The water quality in the river and lakes is a different story, and we'll go through that shortly.

Safest Places to Visit in Detroit

The lovely gardens and elegant home are open for tours, with an educational wing to learn about automotive history and the Ford family influence.

You can also have a meal on the banks of Lake St. Clair.

Detroit Princess cruises offer seasonal rides for lunch or sunset dinners that run for several hours and include entertainment and history lessons as you glide on the water in an elegant steam cruiser.

You’ll get to see both the American and Canadian sides of the river.

There are a variety of walking or trolley tours.

You can sample the breweries in the city or learn about history and preservation.

You can also book tickets through the links on VisitDetroit.com so you can be sure you’re getting them from a verified source.

The Motown Museum is one of the best ways to explore the musical history of Motor City.

The museum is expanding in Hitsville, USA, with more buildings and exhibits being offered.

It’s like a musical and architectural park of the music that changed the world.

Belle Isle Park is on an island in the Detroit River but still on the United States side of the border.

You can also see the oldest marble lighthouse in America.

There is a bridge you can drive over to get to Belle Isle.

Corktown is the oldest neighborhood in Detroit and is filled with historical architecture, intimate coffee cafes, Irish bars, and plenty of shopping and dining on top of that.

You can also dance the night away or listen to live music until 2:00 am.

Ford Motor Company is investing a lot of money and energy in this neighborhood, so look for new places to open as the neighborhood expands.

Places to Avoid in Detroit

Detroit is a city better explained by the places that are safe to visit than those that aren’t safe.

If you say in tourist areas, you should have a certain degree of safety – but every neighborhood has some degree of crime.

That’s no different than any other major city.

Downtown, Midtown, Corktown, and Belle Isle are among the safest communities to visit.

Whatever you do, don’t go around looking for the “bad parts” of Detroit to make poverty and crime a tourist attraction.

This is unacceptable behavior, and no matter how tough you think you are, the streets of Detroit will prove tougher.

Even Eminem’s childhood home is no longer there, so don’t go try to find it.

There are neighborhoods that might look like empty, dilapidated homes, but crime could be happening inside, so don’t get out of the car to go take a look.

While this sounds like common sense, you’d be surprised how many people ask about the “bad parts of town” so they can get a glimpse.

If the safety threat isn’t enough for you, it’s also illegal to go into an abandoned building.

Safety Tips for Traveling to Detroit

So... How Safe Is Detroit Really?

Detroit’s violent crime rate is six times higher than the national average, and that’s with a 4% decrease in homicides in 2021.

There are a lot of crime problems to be solved in the city, and leaders are making strides.

The best way you can help is to avoid dangerous neighborhoods.

You’ll know which ones they are because they won’t be on any tourism bureau map.

You won’t have to walk between abandoned and blighted homes to visit the popular museum.

Detroit becomes more dangerous when you try to “experience the real Detroit” and don’t look for 8 Mile Road, made famous by the Eminem movie.

While it sounds like common sense, I can’t believe the number of tourist websites I’ve reviewed that offer this same piece of advice – that means it’s a real problem of people trying to get a look inside the “Gritty” side of Detroit.

The city is more than its crime rate.

It has a history that keeps the automotive and musical world moving forward.

It has museums celebrating many cultures.

It brings an international experience with Canada across the way.

There’s too much to see to wrap yourself up in a true crime story or Hollywood experience you want to relive.

Don’t walk around alone at night.

Don’t carry valuables around with you.

Keep away from neighborhoods that don’t look like places inviting to tourists, and you’ll be able to enjoy Detroit and all it has to offer.

How Does Detroit Compare?