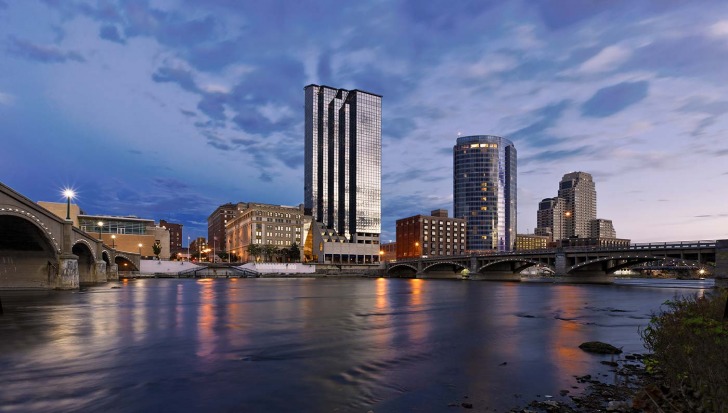 You’ll find a lot of things to do in Grand Rapids, Michigan, but you won’t find one very particular thing – rapids.

The city got its name from a series of rapids that once filled the river but have since gone quiet after dams were installed on the Grand River.

Grand Rapids has been known for many industries over the years, from a furniture-making focal point to a retail headquarters.

As time passed, those industries faded away, and now the medical community makes up the largest employee base.

This is also the hometown of President Gerald Ford, and you’ll find several attractions with his name on them.

The city is known for its vibrant beer and craft beverage scene, receiving several national awards and recognitions.

A Beer City Ale Trail helps tourists sample brews from up to 40 breweries.

Winters can be brutal in Grand Rapids, with three months having a temperature average at or below freezing.

While this might slow some cities down, Grand Rapids still stays vibrant into the winter months.

People generally describe a location in Michigan as where it would be located on a hand.

If you look at the outline of the state, it looks somewhat like a hand, with the thumb on the east side.

By that account, Grand Rapids is located on the knuckle below the pinkie and less than an hour from Lake Michigan to the west.

There's a medium risk here with high crime rates that keep growing. It's certainly not too dangerous to visit, but it's just not a quaint city of 200,000 people. It does have a bit of an edge to it.

The Rapid is the public bus system with more than two dozen routes to get around town. Rental cars are plentiful, and taxis or rideshares are readily available. The Rapid got new government funding for updates, and the website has a list of travel safety advice. There's low risk with any option, but always have good situational awareness when using public transportation.

There's a medium risk here, with 66 pickpockets and purse snatchings reported in 2020. Robbery rates are going up, which means if a criminal can't get your stuff by manipulation, they might try by force. Limit what you bring with you to the bare essentials, and don't carry a large, dangling purse.

Winter storms are the biggest risk here, with harsh driving conditions possible. While the locals are used to this, a traveler might be caught by surprise. During spring, the severe thunderstorm and tornado risk rises, and that runs through early winter. Flooding is also a concern.

The robbery risk is 20% higher than the national average and rising. While it's not an issue that should scare you off the streets, it's smart to watch where you walk and avoid alleys or sidestreets, opting for major roadways and more crowded areas.

There's a low risk here in a smaller city without major hard targets nearby. Detroit would be the top city of concern for terror attacks in Michigan.

The majority of scams here target locals, like utility scams and people pretending to be officers and demanding money. To avoid rental scams, never wire money to secure a reservation and make sure the landlord can show proof of a rental permit.

By the numbers, men are actually more likely to be a victim of a violent crime in Grand Rapids. Women should use basic security steps, like not walking around at night and traveling in groups as much as possible. There's the same medium risk for women as there is for men.

The 2021 Water Quality Report shows Grand Rapids meets or exceeds all requirements at the state and federal levels. No violations were reported. The only time you should be concerned about water quality is during or after flooding.

Experiencegr.com is the official tourism website for the city, so use this as a starting point to do additional research.

You can also look into a Culture Pass on this site, which offers discounts on some of the most popular places to visit. A three-day culture pass is just $24.

There are things to do in Grand Rapids during each season, and the tourism site breaks down the different seasonal options.

Here I’m going to cover things that would be good to see through the bulk of the year.

Beer lovers can download the Beer City Brewsade app to get information about all of the breweries, wineries, and distilleries available for tours and the top bars serving locally produced drinks.

The Gerald R. Ford Presidential Museum is a perfect stop to learn about the president, his accomplishments, and challenges during his tenure.

Different events are held throughout the year, so look at the schedule before you go.

The John Ball Zoo is a typical metro area zoo surrounded by a large park.

There are 10 sections of the zoo open with animals from all over the world.

The zoo closes in late November and opens again closer to spring.

The zoo has a hipline, sky ropes course, and camel rides.

Various difficulty levels are available to accommodate any fitness or fear level.

You can score great deals on tickets by going on certain days of the week or later in the day.

Lookout Park is a great place to see the skyline of Grand Rapids.

While there’s not much else to do there outside of a traditional park, you can get some great Instagram moments or family photos with the city behind you.

If you are going at night, keep your doors locked when you are outside the car and don’t go alone.

Horticulture exhibits change throughout the year, and in the warmer months, there are performances at the pavilion.

The sculpture garden is globally known and contains more than 200 sculptures.

Places to Avoid in Grand Rapids

The areas just north, south, and west of downtown can be more dangerous.

While the crime rate here isn’t overwhelming, you should still stick to major roads and highways and avoid cutting through neighborhoods. Stay east of the river as much as possible.

If you find a hotel in East Grand Rapids, that’s a different city and is much safer than Grand Rapids.

It will mean a longer commute to the city to see the tourist attractions.

You want to look at ExperienceGR.com to get information about Grand Rapids, Michigan.

So... How Safe Is Grand Rapids Really?

Looking at the crime data from 2022, the rates of homicides, aggravated assault, robbery, rape, and theft are all above the national average since the first of the year – and there are still three more months in 2022 as of this publication.

Grand Rapids is facing what a lot of cities are – rising violent crime rates and no clear way to stop the problem.

Most violent crimes are among gang members, drug dealers/users, or illegal gun incidents.

There’s not a rash of random acts of violence against tourists, but there’s always the concern of collateral damage.

The Neighborhood Activation Project is a new program started to help reduce crime and increase community involvement in underserved communities of color.

This could lead to lower crime rates in the long run.

Stay out of the local neighborhoods, especially on the south and southwest sides of town, and use all the basic tourism safety techniques you know.

How Does Grand Rapids Compare?