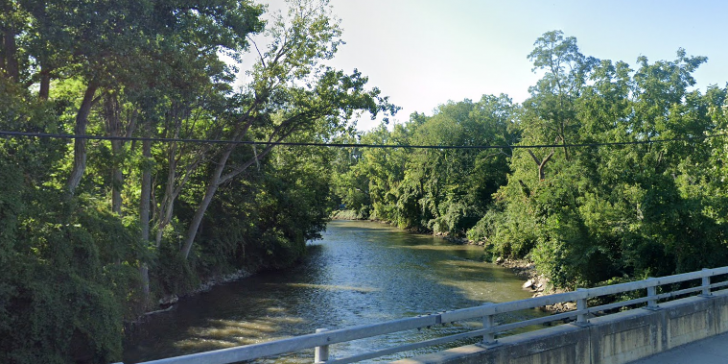 Flat Rock, Michigan, is a small town in the Downriver region outside Detroit.

For those looking for more pure Michigan wilderness while still being close enough to the big city, this is the place for you.

The very same outdoor benefits fueled Flat Rock to become a city when Henry Ford wanted to spread the economic impact of his motor company to the surrounding Detroit regions.

The Huron River’s power was harnessed into a hydroelectric powerhouse, and some of the first headlights of Ford cars were made here from the 1920s until 1950.

As many jobs as the plant brought to Flat Rock, named for the abundant limestone nearby, the city managed to keep that small-town charm it holds to this day.

Flat Rock also offers a downtown section where you can eat, drink, and be merry while offering river activities and Metroparks east and west for outdoor adventures during all seasons.

You also have other charming communities to visit nearby, like the island of Grosse Ile (not to be confused with the one in Quebec, Canada).

Flat Rock has a low overall risk, with lower than average crime rates across the board, yet an exciting enough region to avoid getting bored.

Neither the Detroit public transportation system nor the suburban bus system makes it as far as Flat Rock, so you'll be reliant on taxis or rideshares unless you have a rental car (which is strongly suggested).

This is another low risk, with no pickpockets or purse snatching reported in 2021 and fewer than three reported in each year going back to 2017. You shouldn't be lackadaisical with your stuff, but you can rest easy that it's not an imminent risk.

A mixed bag of dangerous weather potential comes in all seasons. Winters are cold and blustery, with blizzards and ice storms being fairly common. Spring fires up severe thunderstorms and tornado potential. Flooding is also a risk during heavy rain events, going so far as to block off interstates around Flat Rock. Wayne County Emergency Management's website offers full details of risks and safety precautions.

Just two robberies were reported in 2021, with a total take of $2. This is another low-risk, but it's also particular to Flat Rock. Other Downriver communities might not be as safe. It's smart to use safety precautions for a worst-case scenario, not just where you're visiting.

The risk in Flat Rock is low, and the only potential target would be the dam. However, the damn is also nearly a century old, posing its wear-and-tear risk. For the bigger picture of terrorism risks, read the latest bulletin from the National Terrorism Advisory System.

Even the social media pages for Flat Rock Police Department show very few scams over the past few years, but you can't be too careful. Don't ever give out personal information from someone who contacts you unexpectedly, even if they claim to be a police officer. When in doubt, hang up and provide as much information about the scam to the police.

This is another low-risk and a great place to seek some safe solitude. You'll need to be outdoorsy and know wilderness and water safety, but as long you top that with common sense, there's nothing to worry about here.

The 2021 Water Quality Reports show no violations and full compliance with all state and federal standards. There was a major issue in 2021 when Ford accidentally released a dangerous chemical into the Flat Rock water system, prompting evacuations. That issue has been cleared, but we have much to discuss about outdoor bodies of water and chemical dangers still to come.

History, hometown feel, and the Huron River sum up the things to do in this more rural part of Downriver.

Flat Rock Historical Society’s website is a helpful resource, and you can look at the Flat Rock section on the Pure Michigan and Visit Detroit website, though they aren’t very robust.

I found the Downtown Flat Rock website to be one of the most helpful.

This site has four buildings, a museum, and a veterans memorial.

Events from ghost tours to “Diggin’ Up History” cemetery tours are hosted throughout the year.

Don’t get your hopes up for the downtown area, as it’s not one of those cobblestone streets and door-to-door business Main Streets, but it does have the quaint charm with locally owned businesses offering authentic food and items.

Don’t miss the Blue Heron Trading Company, one of the top spots for a cup of coffee and a souvenir or special gift for a loved one.

Stop by the Flat Rock Train Depot Museum on your way to our first park on the list.

This small but mighty museum takes you through the history of the railroad brought to Flat Rock by Henry Ford himself.

Model train sets circle the museum, and you can also get a look at the headlights that shined the way for Flat Rock to become a city.

Walk over the Flat Rock Dam from Downtown using the pedestrian bridge to visit Huroc Park.

This island park is surrounded by the river and offers a walking trail, playground, and nature viewing.

Oh, fishing is very popular too.

Do you want to know how popular?

I was using Google Maps Street View to see different corners of the park, and one 360° view shows part of the park is flooded, and a man wearing waders is standing in the floodwaters fishing.

You can’t (nor should you want to) swim at the park, and alcohol is banned.

You might be overwhelmed with the other outdoor options near Flat Rock.

The Detroit area has Metroparks scattered throughout the region, and there are (at least) four near Flat Rock.

You can’t go wrong with any park, but each one has its own amenities.

Some are more wilderness-based, while another offers a nature center.

One has a golf course, while another has a waterpark.

Metroparks.com is the place to review all your options.

Flat Rock holds an annual Riverfest in September when the weather is nice.

This family-friendly event has live bands, inflatables, and fireworks.

FlatRockRiverfest.com has all the details for next year’s event.

Head south of the parks to visit the Flat Rock Speedway, with regular races scheduled from spring through fall.

Car festivals and flea markets are also held throughout the year.

Places to Avoid in Flat Rock

You don’t have to worry about dangerous neighborhoods in Flat Rock, but we advise always staying on main roads and interstates just for the utmost safety.

The Ford Flat Rock Assembly Plant is in the industrial part of the city and, as of this publication, is not open for tours.

Don’t try to get in because you won’t be allowed.

Call to check closer to your visit to see if tours have resumed.

You can see a lot of history and innovation surrounding the Ford brand in Dearborn, which is 30 minutes north.

Before you even think of touching the water of Lake Erie or the Huron River, visit the Michigan Department of Health’s website.

The waters here are known for being polluted and often see advisories or warnings about the bacteria, chemicals, or PFAS (the “forever chemical”) in them.

Everything from NO CONTACT warnings to DO NOT EAT fish advisories are regularly issued, and you should know the risks before you go.

Before you even think of heading to Lake St. Clair near East Detroit, it has similar issues.

So... How Safe Is Flat Rock Really?

The Ford factory might be the only way you realize that you’re near Detroit when you visit Flat Rock.

It’s a small town with wilderness or rural areas on all sides.

Usually, small-town crime rates appear overly inflated since the math required to get to “crimes per 100,000 people” can be easily skewed in one direction or another.

Flat Rock breaks that mold by having lower-than-average crime rates and detailed information about the crimes that happen.

No strangers were victims of violent crime in 2021.

The city has seen just three homicides since 2011.

Car break-in rates make up 35% of the thefts, but the raw number is 38 car break-ins or accessory thefts.

The Ford plant has been a victim of more stolen cars or trucks than the city.

You might see some panhandlers in Flat Rock; unless they are aggressive, police can’t do anything about it.

Panhandling bans have been ruled unconstitutional.

The Supreme Court ruled that it’s an expression of free speech, protected under the first amendment.

That doesn’t mean you have to tolerate offensive or scary behavior.

You also should not feel obligated to give them money.

Helping a local shelter will be money better spent.

If you love the outdoors, Flat Rock is the place for you.

If you want to have more suburban amenities, consider Southgate or Taylor.

Even Dearborn is considered Downriver, but then you get a whole new batch of safety concerns.

How Does Flat Rock Compare?