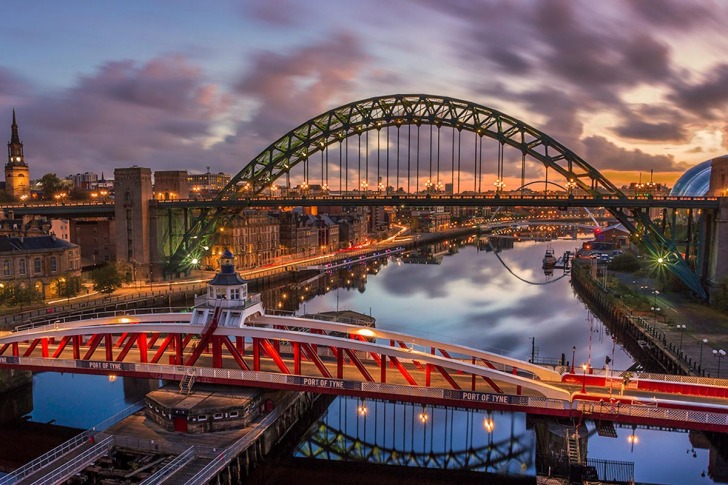 Newcastle upon Tyne is a port city in the North East of England.

It has arguably the best nightlife in all of Britain.

Newcastle is a lively and diverse city known for its nightlife, art, music, and sports.

It is one of England’s core cities and is a center of culture, architecture, and business.

The town is also home to the Geordie culture, with a rich heritage of folk music and dance and its dialect.

Newcastle becomes more and more popular among tourists thanks to regeneration within the city and also its proximity to areas of outstanding natural beauty such as the Northumberland coastline and the Pennine hills.

Warnings & Dangers in Newcastle upon Tyne

Newcastle upon Tyne is safe enough if you don't get involved in football hassles or drunken fights late at night. Do not leave valuables unattended, and everything will be in order. Getting around the city at night is better by taxi, it’s quite safe.

Newcastle upon Tyne is accessible by public transport. It's safe enough if you keep an eye on your pockets, especially on crowded buses. Taxis are convenient and fast but can be quite expensive means of transportation.

Pickpocketing occurs in crowded and tourist places, as well as in crowded public transport. Also, be careful with football events - there are always a lot of people at them, and people don’t watch their pockets usually.

The region prone to floods and storms, but it does not often happen here. Be sure to discover the current situation before your visit to Newcastle upon Tyne.

Severe cases of armed robbery or kidnapping rarely happen here. However, you always need to be on the alert and use common sense. Drunk people can easily be robbed and harmed.

Cases of terrorist attacks happen at Newcastle upon Tyne from time to time. It can be said this is a common risk here. In general, Europe is susceptible to such attacks, so you need to be prepared for them and study the situation before visiting the city.

In the city, minor fraud with cards at ATMs is possible. Only withdraw money from ATMs at banks. For the rest, beware of beggars or those who want to sell you something valuable at a low price. It could be a fake.

Women traveling alone can feel at ease at Newcastle upon Tyne. Use common sense and don't get drunk in bars late at night. It is also worth being especially careful during football events; fans can be rude and drunk.

So... How Safe Is Newcastle upon Tyne Really?

Newcastle is generally quite a safe city.

The index of crime is moderate to low.

But it increases last year, especially property crimes such as vandalism and theft.

So be sure you lock your doors and cars, park it on guarded parka lots, and do not leave valuables in it.

Use common sense and keep a low profile while traveling in Newcastle upon Tyne. Beware of petty theft in crowded places.

On the weekends the city became rowdy, bars are full and there a lot of drunken people.

Keep yourself apart from drunken fights, and you’ll be ok.

Football fans are quite rude and noisy.

They can behave very inadequately during football competitions.

Be careful if you are in the city at this time.

It is a good idea not to wear the colors of Sunderland football club when in central Newcastle, and vice-versa so as not to attract any unwanted attention.

Anyway, the crime in this city is generally lower than in other cities the same size in Britain.

Still, some inner-city areas in the west and east ends are best avoided at night, but those areas are far from any tourist attractions.

There are many police cameras in the city and the police work quite quickly, so it’s possible to say that you will feel quite safe in this city.

How Does Newcastle upon Tyne Compare?

10 Reviews on Newcastle upon Tyne