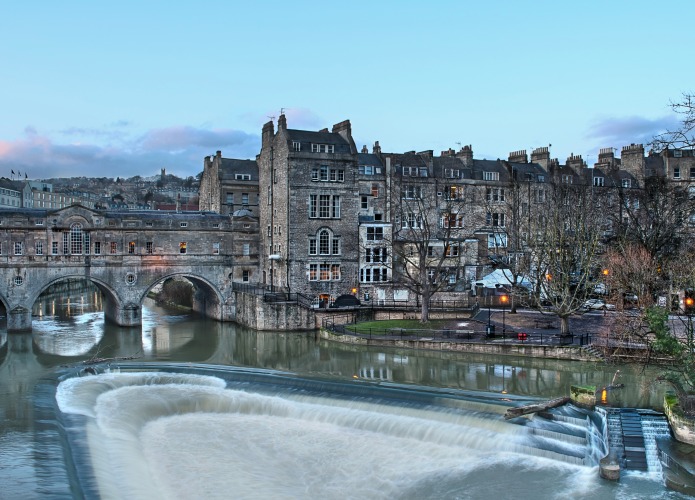 Bath is a World Heritage Site, located around 100 miles west of London and 15 miles southeast of Bristol.

Here, you’ll find Roman baths fascinating – since this is a Roman and Georgian spa city.

A modern spa but the same spring that the Romans used.

You can also wander around and enjoy architecture: Royal Crescent, The Circus, etc.

The best thing in Bath is just walking around, enjoying the architecture & small scale city.

You can also rent a bike and cycle along the canal path to/from Bradford-on-Avon.

Overall Bath is a very safe city to visit! Even though there are parts that are dangerous and should be avoided, it is, for the most part, completely safe to travel to.

Taxis and other forms of transportation are known to be very safe and reliable in Bath, as would be expected in a city belonging to such a developed European country.

Even pickpockets aren't too common in Bath. You might encounter a bag snatcher or a thief here and there but it isn't the norm. Take basic precaution measures and minimize your chances of being stolen from.

When it comes to mugging and kidnapping, Bath is very safe. However, you should be careful and avoid dangerous areas where you could, hypothetically, get attacked.

Since it is so filled with tourists, it only makes sense that the place will be full of people trying to scam you. Always be cautious with people trying to distract you, help you with your luggage, or groups of people acting strange. Always check your change twice and negotiate everything in advance.

Bath is mostly very safe for women to travel to. Just follow your basic common sense and general rules of things to avoid, and you should be fine.

So... How Safe Is Bath Really?

Generally speaking, Bath is a very safe city to visit and what contributes to its friendly and vigorous vibe is a large number of tourists and university students.

Bath city center is filled with people and is a vibrant scene until late on Friday and Saturday evenings, but you should count on things getting a little bit dangerous and rowdy when it comes to closing time, so avoid roaming the streets with bars at those hours.

You may also encounter occasional groups of homeless beggars around the parks and abbey and this can be very uncomfortable and scary.

A city is a great place for cyclists, but be aware that there have been robberies and attacks on the wonderful Bath-to-Bristol cycle path.

The biggest nuisance for tourists has to be the risk of pickpockets, so you should be very careful when visiting important city landmarks and tourist areas, or crowded places.

How Does Bath Compare?