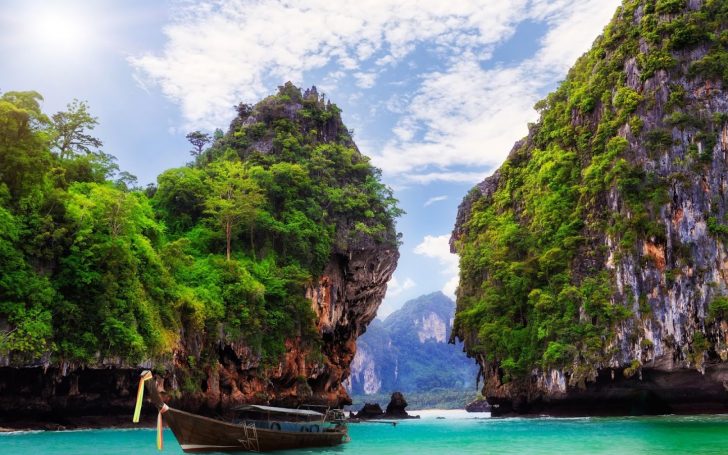 Thailand, officially known as the Kingdom of Thailand is located in Southeast Asia, with coastlines on the Andaman Sea and the Gulf of Thailand.

It is a country known for warm and welcoming people that are used to the heavy flows of tourists that come to this country in growing numbers every year.

Thailand is probably the most touristy Southeast Asian country, as they line up to visit its incredible features, that are aplenty: anything you want in a holiday – you name it and Thailand’s probably got it: green luscious jungles, turquoise waters so warm that it feels like you’re taking a bath, and food that will challenge your taste buds like none other.

Though exotic as can be, it is equipped with everything a tourist might need or want, and there is something for everyone, and for every budget.

Some of the best luxury hotels are located here even though Thailand is known for being backpacker-friendly.

The most important thing about Thailand: it has resisted the heavy flows of tourists, and kept its innate Thai identity, keeping its rich culture, religions, and history safe.

Generally speaking, Thailand can be considered a safe country: some parts are very safe, while others are highly dangerous. You better apply all possible precautious measures, just in case you stumble upon the latter.

There is a great risk when it comes to transportation conditions in Thailand. The number one cause of death for visitors to Thailand is motorbike accidents that often occur on the narrow, mountainous and twisty roads of Phuket and Samui. These are completely new traffic rules for tourists, that they are not used to, which makes it difficult to be a part of the transportation system. Avoid public transport too, as this is where the pickpockets operate.

As Thailand is a growingly popular tourist destination, it's actually to be expected that pickpockets operate everywhere, usually in crowded places filled with foreigners. Excessive vigilance is highly recommended.

As for natural disasters, Thailand is known for tsunamis, severe storms, and occasional earthquakes.

Kidnappings are not that often, though they have happened, especially in the National Parks in the area close to Myanmar (Burma) border, areas known as gathering places of bandit groups. Muggings are also rare, but they're also possible, especially in the remote areas of the country, and on the outskirts of big cities.

It is advised against visiting far south regions of Thailand, such as Yala, Pattani, and Songkhla since they have been targets of small bomb attacks and shootings. As for Thailand’s main cities, they have been assessed as a medium-threat location for terrorist activity.

Be prepared that most people providing any type of service for tourists in Thailand are probably going to try to scam you or rip you off. Tuk-tuk drivers, fake police officers, street vendors are all possible scammers. Keep in mind that ATMs are places where criminals try and steal pin codes. Also, avoid drinking in local clubs and bars. There have been many reports of tourists being drugged and then stolen from.

Even though Thailand could generally be considered a safe country for women, they are still highly advised to follow the basic rules of precaution. Try avoiding dark alleys, walking alone along with dark, poorly lit or deserted areas, or finding yourself late at night in areas filled with bars or clubs as you might receive some unwanted attention. Apart from that, use your common sense and apply all basic precaution measures.

So... How Safe Is Thailand Really?

Thailand is somewhat safe to visit, though it does have its dangers.

Another, probably the most severe, danger in Thailand, and the number one cause of death for visitors to Thailand is motorbike accidents, that often occur on the narrow, mountainous and twisty roads of Phuket and Samui.

How Does Thailand Compare?