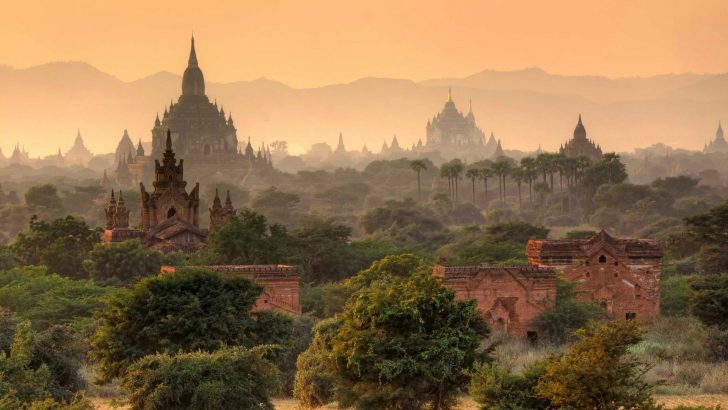 Myanmar otherwise referred to as Burma and officially called the Republic of the Union of Myanmar is a country located in Southeast Asia.

It lies on the Bay of Bengal and the Andaman Sea coast with Bangladesh and Republic of India to the west, China to the north, and Laos and Thailand to the east.

The attractions of this country are mostly of a spiritual nature.

It is filled with temples, pagodas and historical sites, while areas like Bagan offer so many attractions that it would impossible to experience them during one visit.

To those yearning for a break, Myanmar offers some gorgeous isolated beaches, while some are seasonal – which basically means that they are closed during the monsoon season.

Ngapali and Thandwe are regions where beach tourism is somewhat developed, and Chaung Tha, Ngwesaung and areas near Dawei are right behind them, with Dawei being the central spot if you’re into isolated beaches.

Generally speaking, Myanmar is a safe country for tourists since its laws are extremely strict to all those causing problems to tourists. However, you shouldn't relax as it definitely isn't without its dangers. Be cautious and apply all precaution measures that you would stick to in your own country.

Transport in Myanmar is mostly safe but bear in mind that it isn't too reliable. The roads in Myanmar are slow, rough and winding by western standards. When getting into a car or a taxi, count on a long ride, and if you're prone to car sickness, you might consider flying between places.

Pickpockets do operate here and there, but tourists are rarely targeted, even in the regions outside of the major cities. Still, there are regions where they're really active so you should be careful. Don't flash your belongings in public or leave your valuables in plain sight. Be especially careful in crowded places frequented by tourists.

The rainy season that lasts from May to October brings occasional flooding, along with typhoons and tsunamis that are also common.

There have been very few cases of tourists being mugged or kidnapped. Myanmar is a safe country when it comes to violent crime. Still, avoid dark and deserted areas after dark.

The chances of terrorists trying to carry out attacks in Myanmar are moderate. Political tension and unrest are present and could erupt at any moment. Be especially careful around the borders with Thailand, Laos or China.

There are many scams in Myanmar and most of them involve people tricking you when handing you your money or change. There are situations where guest house owners might try and pass you damaged bills or non-exchangeable bills in change. Always double check any change you get. Some moneychangers might also try the sleight of hand tricks to either swap your good bills for damaged ones or lower denomination notes. There have even been reports of moneychangers counting the kyats in front of you and then somehow taking some of them during the transaction. They are very skillful, so be very careful and check everything twice.

Myanmar is a safe country for women. However, if you are a woman and plan on going there alone, make sure you don't wear anything of value when walking the streets and be careful at night. Apply all precaution measures you would in your own country.

So... How Safe Is Myanmar Really?

Myanmar is actually among the safest countries to visit in the developing world, in part due to the strict Buddhist culture, but also due to government’s Draconian punishments that await all those who cause inconvenience and trouble to foreigners.

When the crime is concerned, you can expect pickpockets here and there but that’s about it.

There is little chance that you will become a target even in the outskirts of larger cities.

If you do end up in any kind of trouble, you can talk to the police: even though they are not always up to Western standards, you can count on them solving your problems.

There is the issue of begging, though, as it has become a major problem in the main tourist spots like Bago and Bagan.

Children and “mothers” carrying babies can be seen everywhere and they are usually begging tourists and Westerners since they are perceived as the ones that have money.

The beggars are actually just part of larger begging syndicates so don’t feel bad just walking past them.

However, if you have to give them something, be extremely cautious as your wallet can become an easy target when you get it out in plain sight.

Even though police can be counted on, you should know that most officials and other civil servants may discreetly ask you for a bribe, or expect one, or even come up with non-existent issues like missing forms, closed offices in order to extort money from you in the form of a bribe.

Pretending not to understand or asking to speak to a superior usually works in these situations.

But don’t worry too much as tourists are rarely targeted, even more so those of Caucasian descent.

How Does Myanmar Compare?