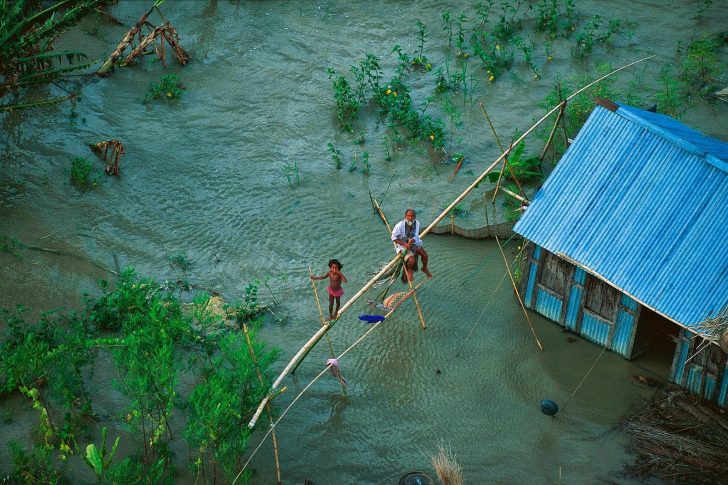 This humble country, often overlooked by many tourists, is located in Southern Asia, sharing its borders with the Bay of Bengal to the South, though its major part is almost completely encircled by the Republic of India – literally around: to the West, North, and East.

It also borders Myanmar to the Southeast.

And although tourists keep forgetting it and overlooking its many virtues, considering it to be off the beaten path by literally any measurement, Bangladesh is a country of very friendly people and you can expect a warm welcome if you stumble into this part of the world.

A major part of Bangladesh is covered by the Bengal delta, the largest delta on the planet.

It also boasts highlands with lavish green forests located in its northeastern and southeastern regions, as well as many islands and a coral reef.

Among other natural beauties you can find here, there is the longest unbroken sea beach, Cox’s Bazar Beach, and the Sundarbans, the largest mangrove forest in the world.

It is a country of immense biodiversity, with flora, fauna, and wildlife like nowhere else, including endangered Bengal tigers, the national animal.

Bangladesh is mainly a safe country to visit. However, it does have an extremely high rate of both petty and violent crime, though it's mainly ridden with petty street crime. You should be vigilant and take all possible precaution measures in order to minimize the risk of getting hurt.

Public transport is also risky. If you're traveling in rickshaws, CNGs or taxis, especially at night, you may be particularly vulnerable to being attacked and robbed at gunpoint. Avoid public transportation when traveling alone.

Since Bangladesh is a very poor country, it is no surprise that pickpockets are extremely active. They are an everyday occurrence, so you should be extremely careful when handling your valuables and never carry your money in a purse or a pocket. Never carry all your money in the same place, and be aware of your surroundings at all times.

Violent crime is also a common occurrence in Bangladesh and you have to be very careful. Armed robbery is the second most common crime in this country, so do everything you can do keep your valuables low profile. Kidnapping of businessmen and abduction of children are becoming increasingly popular.

There is a high probability of terrorists trying to carry out attacks in Bangladesh. The last terrorist attack occurred in March 2017 and it targeted security forces and there is a risk that future attacks could also occur in public places where public gatherings take place. Places where foreigners are known to gather may be at higher risk of attack, so be vigilant at all times.

Scams are an everyday occurrence in this country. As in most countries ridden with poverty, there are a number of scams performed on tourists, and it is no wonder that the locals use every situation to try and get money from you. Double check everything, and negotiate everything in advance. Be careful when taking a taxi and make sure they use the meter or negotiate the ride before getting into the cab.

Though many women have visited Bangladesh and encountered no problems at all, going to Bangladesh alone has its risks. If you do, be sure to avoid remote streets, both during day and night, and do not flash your belongings or handle money in public. Stay out of the streets at night and be vigilant for any possible dangers at all times.

So... How Safe Is Bangladesh Really?

Despite being a country of friendly and open-minded people, Bangladesh is poor, with a high crime rate, so coming to Bangladesh may not be the safest option crime-wise.

This means that you should stick to your wits and apply basic common sense, like not going anywhere alone after dark.

However, if you do find yourself in a risky situation, start shouting and drawing attention to yourself.

That should work just fine, as someone will probably run to your aid.

Most tourists are safe during the day as they draw curious looks and locals are highly interested in them, so you will probably be watched at any time.

However, you should keep your valuables close to you at all times, especially when traveling by rickshaw, CNG (auto-rickshaw) or bus.

Never wear anything that is visibly valuable, latest technologies and expensive jewelry, and most middle-class locals just opt for gold or silver imitations when going out.

Most crimes typical for Bangladesh are petty in nature, so expect thefts like pickpocketing or purse snatching, especially when walking near the road: many criminals work as teams on motorcycles.

The second most common crime in Bangladesh is armed robbery and the areas you should avoid are those of Gulshan and Banani in Dhaka, as they have experienced such cases.

The robbers mostly target westerners or anyone looking like them.

Avoid moving from place to place in a rickshaw, CNG or a taxi, especially at night, as they are particular targets when it comes to gunpoint robberies.

How Does Bangladesh Compare?