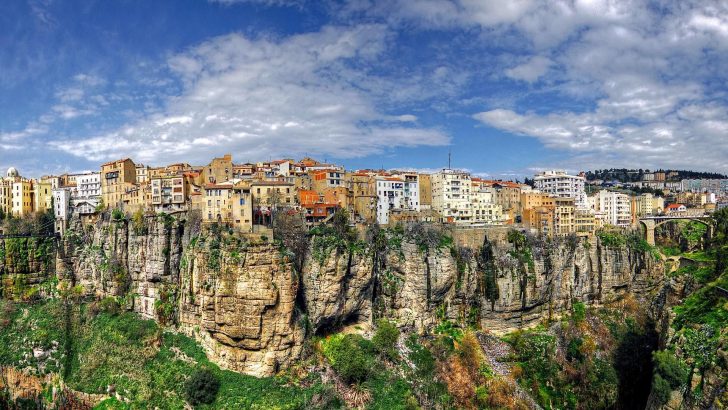 Algeria is a country located in North Africa, with a Mediterranean Sea coastline in the north and sharing its borders with Morocco to the northwest, Tunisia to the northeast, Libya to the east, Niger to the southeast, Mali to the southwest, Mauritania and Western Sahara to the west.

It also became the largest country in Africa after the secession of South Sudan from Sudan.

And even though Algerian recent history is shaded by civil wars that have been raging until 2002, Algeria is slowly picking itself up and restoring order.

Tourists coming to Algeria are usually those with a thirst for history and culture, as this country is best known for its ancient ruins from the Phoenician, Roman, and Byzantine eras.

And even though it is better known for the ruins, another feature it offers to its tourists is the experience of visiting the vast spaces of the Sahara desert.

Many say that no other country can offer its tourists such an exciting visit to the vast Sahara desert as Algeria.

You should know right from the start that Algeria is a country wracked by terrorism, and that terrorist troupes are still the cause of fear in this North African country. Having said this, Algeria still has tourism and it is possible to visit and travel through the region without consequences.

Transport is not that safe in Algeria, as tourists using public transport will stand out and other people will be watching you, on the streets and especially on buses, trains, etc. Make sure you don't fall asleep while traveling on public transport, as you might wake up with empty hands. Pickpocketing on buses and trains is also common.

Like in most developing countries, petty theft and pickpocketing are widespread in Algeria. Make sure you don't flash your valuables and generally don't look like you're wealthy. Dangling cameras, flashing money or credit cards or expensive jewelry is strongly recommended against.

The situation is not serious in Algeria when it comes to natural disasters. Some parts of Algeria are susceptible to severe floods that cause substantial material damage. Northern Algeria is located in a seismically active zone.

Violent crime exists in Algeria and has been on a rise lately. Muggings are quite common and criminals are particularly active after dark. It's best to avoid dark streets and deserted areas when night falls.

This is the sore spot of Algeria. Terrorists are very likely to try to carry out attacks in Algeria, including kidnappings. The biggest threat comes from Al Qaeda in the Islamic Maghreb and other regional Islamist groups like Al Murabitun and Daesh-affiliates. These groups have been active across the country and are a threat throughout Algeria.

There are many scams in Algeria, one of the most popular being the tour guide scam, where men pose as tour guides and are actually just con artists trying to get your hands on your money. Be wary of people trying to distract you in order to steal from you and of taxi drivers overcharging you for a ride. We advise you to be extremely careful when handling money and around ATMs.

Algeria is mostly safe for women to travel to, but it is still advised to go out accompanied at night. Be sure to avoid remote streets, both during day and night, and do not flash your belongings or handle money in public.

So... How Safe Is Algeria Really?

Even though you will read many warnings about Algeria’s safety, concerning its political situation, things are getting better and better during this country.

After the civil wars, terrorism in 2005 was focused only on areas such as wooded mountains and near the Libyan or Malian borders, where the attacks were caused by the war in those two countries.

What truly might be problematic for tourists is the terrorism that is still present in the country’s south where Algerian terrorist troupes have been trying to overthrow the Algerian government for years.

Known as Al-Qaeda in the Islamic Maghreb, the group has caused numerous attacks in the country, and the scariest thing is that they’ve publicly stated foreigners as their targets.

But this isn’t the biggest problem for the Westerners visiting Algeria: kidnappings are, and they’re widespread.

If you’re a tourist, it is best to avoid zones near northern Mali, Niger, Western Sahara, and Mauritania as kidnappings and killings have been reported as recently as 2011.

Suicide attacks are also common in this country.

Tourists are highly recommended against traveling anywhere after dark.

Avoid cars, minor roads and if you do venture somewhere during nightfall and wind up unsure about your whereabouts, don’t hesitate to ask the police for some advice.

How Does Algeria Compare?