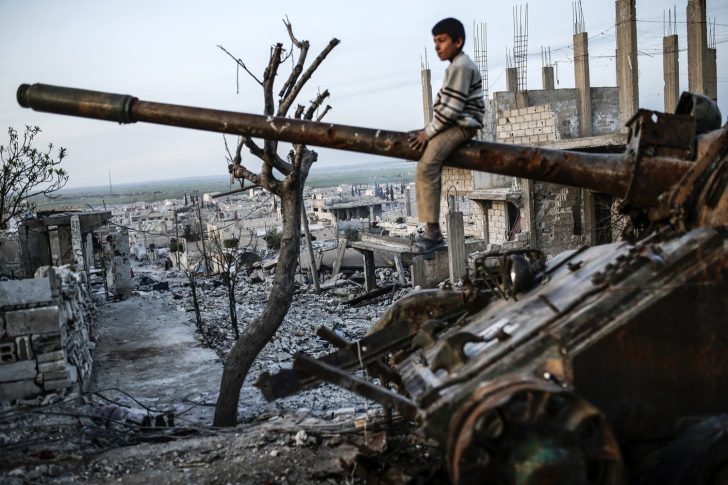 Syria is one of the larger countries of the Middle East and shares its borders to the north with Turkey, to the east with Iraq, with Jordan and Israel to the south, and with Lebanon to the south-west.

An added natural beauty is its short coastline on the east Mediterranean Sea.

However, Syria has been caught up in serious warfare and it is, at this point, so dangerous to visit it that it has become impossible to visit the country as it is essentially a war zone.

The civil war has been raging in the country since 2011, and Syria is now probably the most dangerous destination in the world.

Before this, it was a country of great natural diversity and with plenty of archeological sites worth visiting.

However, the question remains how much of that is left of Syria, given the fact that it is being destroyed for years and devastated by the raging war.

Syria is extremely dangerous for everyone. It is currently probably the most dangerous destination in the world. If you're in Syria currently, try and find a way to get out of it, if at all possible.

You should bear in mind that, even there are plenty of ways to get around Syria, traffic is unreliable with plenty of factors affecting its quality, like the near-constant congestion, drivers that drive recklessly and ignore traffic signs, bad roads and poor quality of road signs. You should be careful.

The country is destroyed up to a point where they're probably aren't many people on the streets as they are in hiding due to the war that is raging or simply in a state of panic. However, if you find yourself on the streets, keep your belongings tightly by your side.

Putting aside the man-made disasters that have hit Syria very hard, one of the most prominent natural hazards that Syria is susceptible to is flooding.

Violent crimes in Syria do exist but are not too common, again, due to the fact that the country is a war zone and every day is a fight for survival.

Chances are extremely high that Syria will be targeted by terrorists while you're there - if you intend to go there. There have been many terrorist attacks already, everywhere in the country, including major cities and the threat comes from many terrorist groups that are active in Syria, like Daesh and Hay’at Tahrir al-Sham

Scams should be the least of your concerns if you end up in Syria. You should, just in case, double-check your change and agree upon a price before making a deal with someone, whether it's a taxi driver or a merchant.

Women aren't safe in Syria. The country isn't dangerous for women particularly, but it is advised for tourists in general, regardless of their gender, not to walk around Syria, be it during day or night, as the country is essentially a war zone.

So... How Safe Is Syria Really?

Traveling to Syria is extremely strongly discouraged because of the on-going raging conflict and war that has been going on for 7 years now and has caused hundreds of thousands of deaths.

Syria is now a war zone and as such, should be avoided at all costs.

You should know that forces loyal to the Assad government have carried out deadly bombings and attacks targeting rebels that hide among the civilians.

On the other hand, rebel forces have also carried out attacks targeting the government and pro-government civilians.

There have been instances of foreigners attempting to enter Syria so they could join the opposition forces (namely jihadist groups) against the government.

The situation, however, is so tense at this moment, that if you get captured by either side, you may be in life danger.

If you end up in Syria and without a way of leaving, at least try and avoid areas that are known as critical war epicenters like the cities of Aleppo, Damascus, Homs and a couple of others.

It should be emphasized once more that tourists should not go to Syria under any circumstance, and there have been incidents of foreigners being killed in Syria.

ISIS terrorists have also been known to operate in Syria’s neighbors Iraq, Lebanon and Jordan, so there aren’t many ways to escape this country.

How Does Syria Compare?