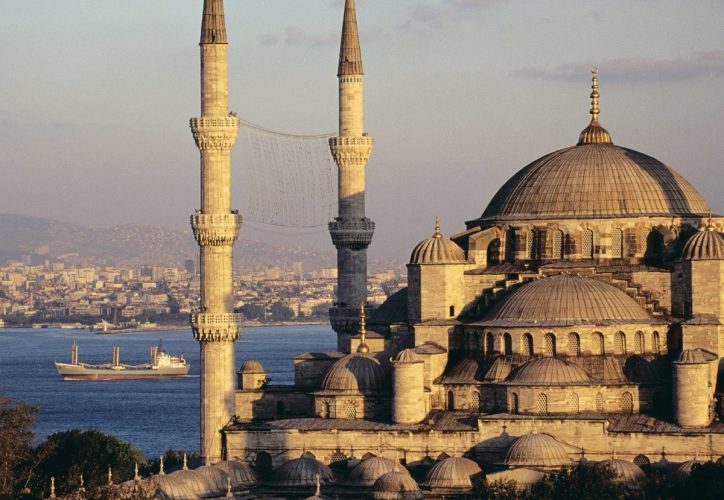 Turkey is a country in the Mediterranean, situated in the Anatolian region of West Eurasia.

Turkey shares its borders with Bulgaria and Greece to the west, Armenia, Azerbaijan and Georgia to the northeast, Syria, Iraq, and Iran to the southeast and flaunts the Black Sea coastline to the north, the Aegean Sea in the west and the Mediterranean Sea to the southwest.

You won’t go wrong going to Turkey: it offers a skyline you won’t easily forget, filled with domes and minarets of various sizes and heights, Roman ruins and contrast between a coastline stretched against a mountainous backdrop of Lycia as well as Pamphylia’s sunny beaches.

What tourists often emphasize as their favorite part of Turkish experience is the unique Middle Eastern cuisine, with baklavas as their number one dessert specialty.

And though Turkey’s beaches are its most famous feature, don’t forget that winter sports, especially skiing, are very popular in Turkey between December and March with temperatures at a constant below freezing point.

Turkey is safe to visit if you avoid some parts of it - namely those near the border with Syria. You should be aware that tourist hotspots, restaurants, shops, and public transportation are places where most thefts and pickpocketing occur, and that violent crime exists here, too.

Generally, transport in Turkey is rather safe and reliable, though if you're driving you should keep in mind that local drivers in the country are reckless and tend to ignore traffic rules and signs.

As for pickpocketing, it is a recurring concern on the streets of Turkey, especially Istanbul, which is a popular tourist destination, so be careful and hold your bags tightly by your side. Places, where you should watch out for pickpockets, are Taksim Square, Sultanahmet, the Grand Bazaar and the Spice Bazaar in Istanbul.

The majority of violent crime happens near the Syrian borders, where kidnappings, muggings, and assaults have been reported. Terrorist groups here usually target those involved in humanitarian work or journalism.

Terrorism is the greatest worry for tourists, as it's been active in Turkey in recent years. The last terrorist attack happened in January 2017. Most of these attacks are linked to Kurdish separatist terrorist activities in south-east Turkey.

The common scam in Turkey is locals befriending tourists, taking them out for a drink, or dinner and then expecting the tourist to pay for it. Taxi drivers might try to trick you into paying more, giving you wrongful information about the price of the ride.

If you're a woman traveling solo you should avoid walking alone after dark in this country. There have been reports of sexual assaults and verbal insults. These can happen even if you're accompanied by a group. Avoid isolated or poorly lit areas.

So... How Safe Is Turkey Really?

Turkey is mostly safe when it comes to crime and its biggest risks stem from its political situation and terrorism risks.

However, that isn’t to say that violent, as well as petty crimes, don’t exist in Turkey, because they do, especially in Istanbul.

Snatching, pickpocketing, and mugging are the most common kinds of petty crime.

However, lately, with the newly developed camera network that supervises the streets of Istanbul 24/7, the mugging and purse snatching declined.

It is useful to know that once you leave the big cities, you’re in a mostly safe zone where tourists have had nothing but positive experiences.

Another advice that might come in handy in Turkey is that you should take every precaution while driving, as drivers in this country are mostly reckless and completely ignoring traffic signs, commonly causing traffic accidents.

The real danger in Turkey and the reason many tourists are a skeptic when it comes to safety in this country are the continuous and frequent terrorist attacks all around Turkey that have to do with the political situation in the state and most of them are linked to Kurdish separatist terrorist activities in south-east Turkey.

How Does Turkey Compare?