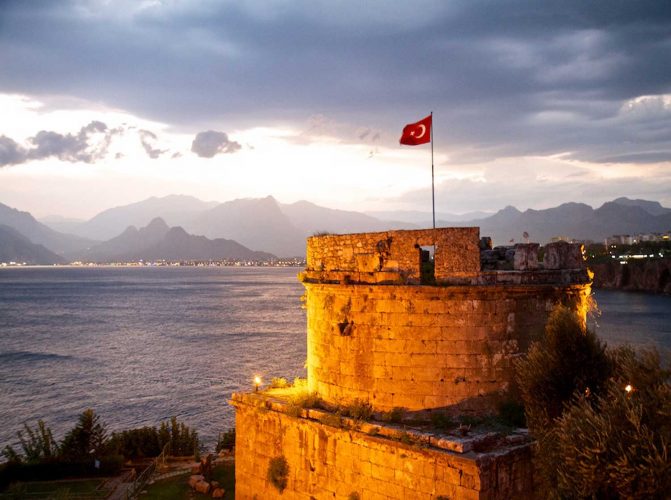 Antalya is the largest city of the Turkish amazing Mediterranean coast, where you can find a perfect mix of summer experience and traditional Turkish culture.

It is also the biggest international sea resort in Turkey.

If you’re planning on visiting Antalya, you probably won’t be able to decide whether to bask in its gorgeous white-sand beaches surrounded by beautiful nature or to immerse in the unique shopping experience in Turkish bazaars and shops.

This doesn’t mean Antalya doesn’t boast historical sites, because it does: Roman baths, Byzantine basilica, the ancient city walls of Kaleiçi are just some of them.

The northern part of Kaleiçi is mostly touristy shops and restaurants lining the narrow mazelike streets.

And don’t forget that, apart from the amazing beaches, you can also visit Aqualand, a large complex of waterpark and beach park combined.

Antalya is safe to visit. You should be aware that tourist hotspots, restaurants, shops, and public transportation are places where most thefts and pickpocketing occur, and that violent crime exists here, too, though they're not common.

Generally, transport in Antalya is rather safe and reliable, though if you're driving you should keep in mind that local drivers in the country are reckless and tend to ignore traffic rules and signs.

As for pickpocketing, it is a recurring concern on the streets of Antalya, which is a popular tourist destination, so be careful and hold your bags tightly by your side. Keep your eyes on your belongings near beaches and crowded places.

Muggings and kidnappings aren't common in Antalya at all, but you are advised to stay away from dark and deserted areas and not take unsolicited drinks or food from anyone you don't know.

Terrorism is the greatest worry for tourists, as it's been active in Turkey in recent years. The last terrorist attack happened in January 2017. This is why you should be aware of your surroundings everywhere in Turkey and never let your guard down.

The common scam in Antalya is locals befriending tourists, taking them out for a drink, or dinner and then expecting the tourist to pay for it. Taxi drivers might try to trick you into paying more, giving you wrongful information about the price of the ride.

If you're a woman traveling solo you should avoid walking alone after dark in this city. There have been reports of sexual assaults and verbal insults. These can happen even if you are accompanied by a group. Avoid isolated or poorly lit areas.

So... How Safe Is Antalya Really?

Antalya is very safe to visit, with a low crime rate and a safe index of 74.5%. Still, you should take standard precaution measures as you would in any other city.

Turkey, in general, is mostly safe when it comes to crime and its biggest risks stem from their political situation and terrorism risks.

All this doesn’t mean that petty crimes don’t exist in Antalya, because they do.

Snatching, pickpocketing, and mugging are the most common kinds of petty crime and you should be especially careful around beaches.

Another advice that might come in handy in Antalya is that you should take every precaution while driving, as drivers in this city can be reckless and completely ignoring traffic signs, commonly causing traffic accidents.

The real danger in Turkey and the reason many tourists are a skeptic when it comes to safety in this country are the continuous and frequent terrorist attacks all around Turkey that have to do with the political situation in the state.

This applies to Antalya too, so when you arrive in this city, keep in mind that you should be aware of your surroundings at all times and take maximum precaution.

How Does Antalya Compare?