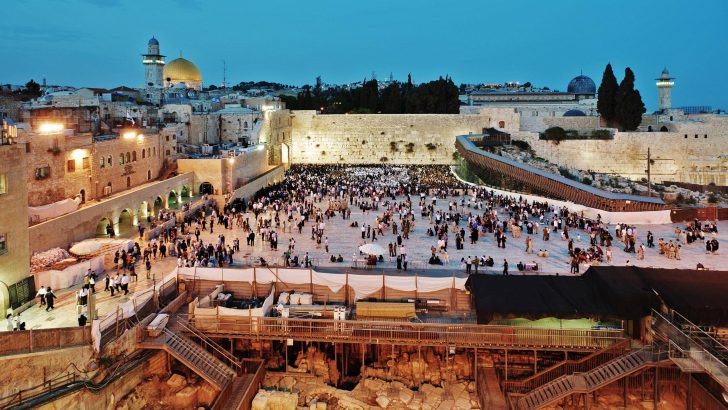 Israel shares its borders with Egypt and the Gaza Strip to the southwest, with Jordan to the east, and Syria and Lebanon to the north.

After World War II, Israel was established as a state for the Jewish people and considered a part of the Holy Land (along with Jordan, Egypt, and the Palestinian Territories).

Another reason why this country is so important from a historical and cultural aspect is the fact that three major religions – Judaism, Christianity, and Islam — all have historical connections to the region.

Tourists can immerse themselves in a number of different activities, since Israel varies significantly in geography from region to region, with landscapes of mountains, valleys and deserts and of course an amazing coastline, with everything else in between.

Each area of Israel has its own tourist attractions and its unique beauty, though the areas of Jerusalem and Tel Aviv are definitely the most popular and most frequented by tourists.

Israel is overall safe to travel to, with considerably low crime rates where tourists are free to explore without having to worry about street crime. However, it is advised that you remain vigilant at all times, especially on public transport since Palestinian terrorist groups have been known to target buses and bus-stops.

It is recommended that you remain vigilant when using public transport since it is often the target of terrorist groups. Try to avoid public transport during rush hours and be aware of your surroundings at all times.

Pickpockets are a problem like in the majority of destinations frequented by tourists. Be careful, keep your eyes open in public, crowded areas such as train stations and airports, and keep your valuables close by your side.

Israel is located in a seismically active area. Apart from that, you can expect sand storms and occasional floods.

It is not likely you will get mugged in Israel. Crime rates are very low, and violent crime against tourists is highly unlikely. Still, be careful near the borders with Syria, Lebanon or Egypt, since there's a risk of being kidnapped in those areas.

Acts of terrorism are very likely in Israel. Avoid at all costs the areas near the borders with Lebanon, Syria or Egypt.

The risk of getting scammed in Israel is pretty low, though you should still negotiate everything in advance, double check your change and never pay anything upfront.

Israel is definitely safe for women traveling solo. Just use your common sense and have your wits with you. Avoid poorly lit and deserted areas at night and finding yourself in places filled with drunken people.

So... How Safe Is Israel Really?

Traveling to Israel is relatively safe, of course, when there is no danger of encountering riots and fights between Israel and Palestinian militants, and this is also your biggest worry if you’re planning on visiting Israel.

Bear in mind that public transport is somewhat dangerous since buses and bus-stops have been targeted by Palestinian terrorist groups since the early 1990s.

However, it isn’t likely that you’ll be involved in an attack, so this shouldn’t pose a great danger to tourist, but you should be wary when using public transportation in Israel.

If you see anyone acting suspiciously, notify the authorities immediately, and never leave your bags or backpacks unattended as they might cause panic since people may suspect a bomb is inside.

As for other forms of crime, Israel is very safe to travel to, it even has one of the lowest crime rates in the world and is much safer, in terms of street crime, than other top destinations in Europe.

Crimes such as mugging and violence happen rarely and even more so towards tourists, so you are safe to walk at night.

You should still take precaution measures, especially if you are a single woman traveling alone, and you should be careful late at night as you would be in your own country but the risks are much lower than in Europe or America.

How Does Israel Compare?