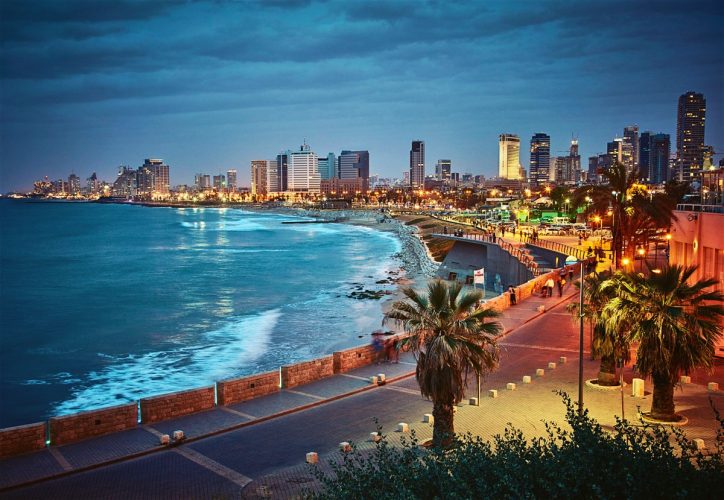 Tel Aviv is the second-largest city in Israel.

Because it is the most liberal city in Israel, and one of the most gay-friendly cities in the world, it becomes famous for the nickname “The Miami Of The Middle East”.

Tel Aviv was founded in 1909 and the 60 Tel Aviv founders started building the first mid-eastern urban center with running water.

Tel Aviv grew steadily and became the center of culture, commerce and light industry – the Israeli metropolis with 3.1 million people.

Tel Aviv was declared a cultural UNESCO World Heritage site and due to the style which emphasized simplicity and the white color, it has got a nickname the White City.

Tel Aviv can be considered an overall safe city in terms of crime. However, frequent terrorist attacks, making it more dangerous than it is.

Drivers need to be watchful since there are numerous car accidents. Make sure that you get insured before trying to drive in Tel Aviv. It is not safe to hitchhike either. Public transport is safe and reliable, as long as you are vigilant when it comes to thieves that frequently operate there. Be aware of the fact that public transport might be the target number one among terrorists. The bus drivers in Tel Aviv speak and understand English, and will answer questions about the destination of their bus.

Since there are some areas where pickpocketing is frequent, tourists should not leave belongings unattended. Serious crime is generally not a problem in Israel since most visits to Tel Aviv are trouble-free, but the theft of passports, credit cards, and valuables from public beaches is common.

Tel Aviv is located in the area prone to seismic activity, so earthquakes are possible. During extreme rain, the flood might happen. Drivers are advised to monitor local weather reports before coming to Tel Aviv by car.

When the mugging and kidnapping risk is in question, Tel Aviv is pretty safe. However, kidnapping is an issue near the border with Egypt.

Some of the most active terrorist groups are Gaza-based organizations and numerous terrorist attacks occurred in the region recently, so the risk is extremely high. In case you happen to be in the middle of a terrorist attack, you need to follow advice from local authorities.

Scam risks in Tel Aviv have not been reported.

Women can feel relatively safe in Tel Aviv, except in one district which should not be visited even during the day. All the other parts of the city are trouble-free. Women need to keep in mind local expectations regarding modest clothing, like long skirts, long-sleeved shirts, and trousers. The scarf is obligatory when entering the Holy sites.

So... How Safe Is Tel Aviv Really?

The security situation in Israel is tense and unpredictable.

Tel Aviv remains a very safe city to visit, but travelers need to be aware of the possibility and high risk of terrorist threats.

Pickpockets, like in every big city, operate at the old and new central bus stations, the beach promenade and bag and bicycle thefts are common.

Crime rates are much lower in Tel Aviv than in most other cities of similar size.

Buses are the best way to tour the city and a very safe way to travel.

Street crime is rare all around Tel Aviv, but late at night, some southern neighborhoods might become dangerous.

The Northern parts, as well as the center, are safe areas in terms of serious crime, but even during the day, there are a lot of pick-pocketers.

Tourist infrastructure in this city is excellent because it is a financial and technological hub of the country and it is very worth visiting.

How Does Tel Aviv Compare?