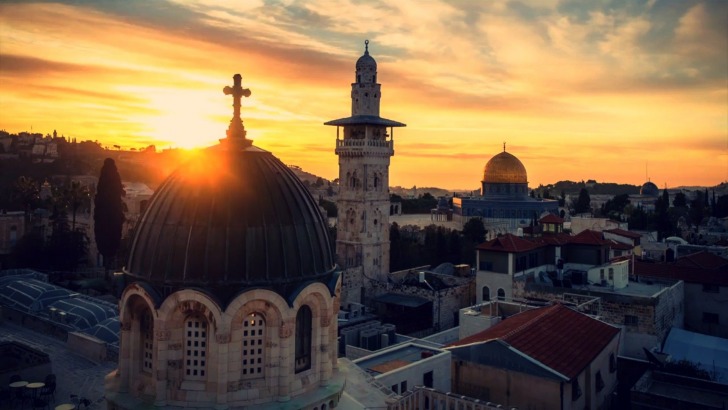 Jerusalem is the claimed capital city of both Israel and Palestine, even though nearly all foreign embassies to Israel are located in Tel Aviv, which is why everyone considers it to be the actual capital of Israel.

Jerusalem is not very large.

It is the largest city in Israel, but you can cross all of it by foot in three hours or by car in fifteen minutes (without traffic).

The real city center for all Jerusalemites is, of course, the Old Town, which is a very religious and touristic place, heavily guarded by the border police, and very beautiful to visit.

Jerusalem is a safe tourist city to travel to, where tourists are free to explore without having to worry about street crime. However, it is advised that you remain vigilant at all times, especially on public transport and watch out for pickpockets!

It is recommended that you remain vigilant when using public transport since it was known to be targeted by terrorist groups. Try to avoid public transport during rush hours since it can get crowded and be aware of your surroundings at all times.

Pickpockets are especially a problem in a city like Jerusalem since it's a destination highly frequented by tourists. Be careful, keep your eyes open in public, crowded areas such as train stations and airports, and keep your valuables close by your side.

Jerusalem is located in a seismically active area. In 1834 it suffered a major earthquake that included the collapse of part of the city wall near the Dome of the Rock

It is not likely you will get mugged in Jerusalem. Crime rates are very low, and violent crime against tourists is highly unlikely. The truth is that the streets of Jerusalem are safer than most cities in Europe or the US.

Acts of terrorism are said to be likely in Jerusalem, but the residents of the city insist that they're very rare and that a smaller number of people are killed in these terrorist attacks than in car crashes throughout the year.

The risk of getting scammed in Jerusalem is pretty low, though you should still negotiate everything in advance, double check your change and never pay anything upfront.

Jerusalem is safe for women traveling solo. Just use your common sense and have your wits with you. Avoid poorly lit and deserted areas at night and finding yourself in places filled with drunken people.

So... How Safe Is Jerusalem Really?

Jerusalem is, for the most part, very safe to visit, but as in any city, you need to be aware of where you are and who is around you.

Most tourists that plan on traveling to Jerusalem are wondering about the possibility of terrorist attacks: the reality is that you are very unlikely to witness or be caught in anything like that.

Even if you tour the city with a tour guide, you will not be taken anywhere even remotely questionable.

In terms of street crime, the streets of Jerusalem (and almost all of Israel) are safer than most city streets in the US.

Females who do not know where they are going should wear tops that cover at least the elbow, and not skin-tight trousers that cover the ankle.

Like pretty much anywhere in the world, it is wise to lock your car when it is parked.

It is also wise to dress modestly when entering Orthodox Jewish neighborhoods.

Otherwise, you risk a verbal attack and occasionally getting spit on.

Like pretty much anywhere, it’s a good idea to be aware of your surroundings and to conduct yourself with respect.

How Does Jerusalem Compare?