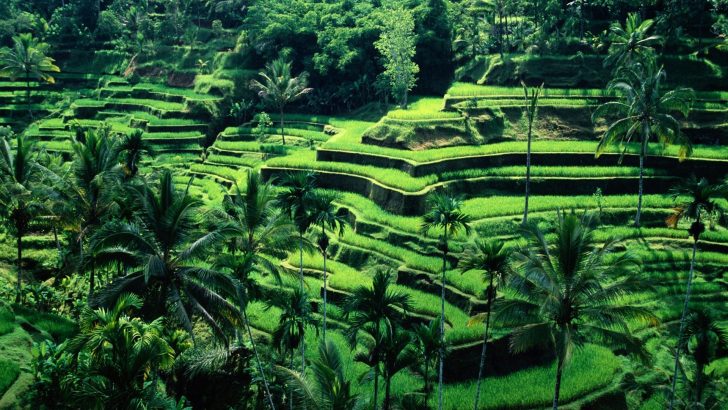 Indonesia is a transcontinental country, mainly located in Southeast Asia, with some territories stretching into Oceania too.

It is located between the Indian Ocean and the Pacific Ocean and has land borders with Malaysia to the north, East Timor and Papua New Guinea to the east, Australia to the south, and Palau, the Philippines, Vietnam, Singapore, and Thailand to the north.

It is geographically interesting since, with 18,110 islands, out of which around 6,000 are inhabited, Indonesia is the largest archipelago in the world.

It is the largest country in Southeast Asia, and astoundingly many people live in it: about 240 million people.

However, Indonesia’s islands and gorgeous beaches aren’t the only things attractive about this country: it offers vast tropical forests stretching days on end, although in the last couple of years, they are being endangered and cut down at an alarming speed.

You should also count in the big cities such as Jakarta and popular islands such as Bali, where the rich tourists enjoy basking in clear waters, or just shopping.

This country truly offers a variety of options for all kinds of tourists.

Indonesia is mostly a safe country to travel to, though it still has its dangers from natural disasters to terrorism and petty theft. Be very cautious on the streets of Indonesia and plan your trip carefully.

Though public transport is significantly better than in its neighboring countries, you should always try to call your reliable taxi driver instead of hailing one on the streets. There are many taxi-related scams, where taxi drivers drive off before you get a chance to take your luggage or force you to collect money from an ATM. Keep in mind that road conditions and drivers' behavior are probably different from what you're used to.

Pickpocketing and bag snatching is a very common issue in Indonesia, especially in public and crowded places like bus and train stations and airports. Keep your belongings by your side at all times and try to leave all your valuables in a security deposit box of your hotel.

Since it is located on the Pacific Ring of Fire (which is the name of an area with a high degree of tectonic activity), Indonesia is especially susceptible to risks of volcanic eruptions, earthquakes, but also floods and tsunamis.

Mugging in Indonesia is generally rare, and foreigners are rarely targeted. Violent crime rates are not too high though you should still avoid dark and deserted areas.

There is a high risk of this country being targeted for a terrorist attack. Recent ones involved suicide bombings and small-arms fire. The last one was performed on May 24th, 2017 when there were bomb explosions at the Kampung Melayu bus station in East Jakarta, killing three police officers.

Scams are an issue in Indonesia, like in most countries, and you should be very vigilant, decline all drinks sent by strangers (since drink spiking is very common in this country), double-check every information and negotiate everything in advance. The most common scams in Indonesia are credit card-related, so be careful when collecting your money.

Indonesia is not the safest for solo female travelers. There is the risk of getting unwanted attention or even the risk of sexual assaults toward women. Avoid parts of cities that are filled with bars and clubs, and visiting them alone, since there is a higher chance of running into intoxicated people.

So... How Safe Is Indonesia Really?

Indonesia is, for the most part, safe to visit, though you should keep in mind many dangers that may befall you if you plan on visiting this gorgeous country.

There are many threats that lurk in Indonesia, from natural disasters like earthquakes, tsunamis, and volcanoes, to social disturbances such as terrorism, attacks, corruption, and crime.

Though crime rates in this country aren’t the biggest issue, and it’s mostly non-violent, you should still take care and be extra cautious.

Muggings, petty theft, and pickpocketing still happen in Indonesia, especially in crowded places such as bus and train stations, markets and areas frequented by tourists.

Watch your laptops, cell phones, valuable cameras and money as thieves have been known to snatch them.

Also, be careful on public transport, since that’s where pickpockets operate and where you can encounter several forms of crime.

Be wary of people sending you drinks since drink spiking is an issue in this country.

Choose your taxis with precaution and always call a reliable driver instead of hailing one on the streets.

Another issue in Indonesia is the politics and the separatist movements that often clash in violent demonstrations and armed struggles in places like Aceh and Papua.

Bear in mind that political events such as elections in Indonesia are often the times of violent and messy demonstrations that you should avoid since they can become so violent that even Indonesian military has to apply violent measures in order to control the protesters.

How Does Indonesia Compare?