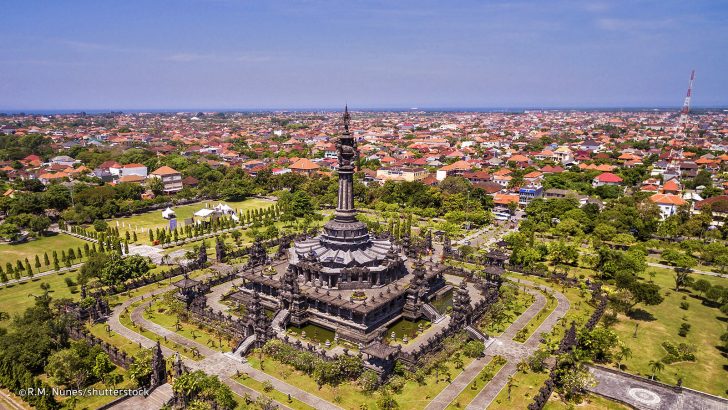 Denpasar, located in South Bali, is the capital city of the island of Bali, Indonesia.

What makes it so attractive to tourists are his temples, palaces, and museums.

In case you decide to visit some of its temples, the dress code is obligatory and you must wear a sarong and sash with you.

There are various tourist attractions like Alun-Alun Puputan, better known as Puputan Square.

If we take into account the fact that the safety index is only 60, a person might believe that Denpasar can be dangerous for tourists. However, tourists may feel safe while in this city as long as they remain attentive. It rarely happens that tourists report being the victim of a violent crime. It might be risky to leave your valuables in the rooms of certain villas.

Driving in Denpasar is not advisable and bear in mind that police are corrupted. It may change the direction on busy intersections and you might get lost. Walking is recommended in the city center. Taxi prices are not determined and it is advisable to avoid taking the taxis waiting at the Airport.

The peak time when pickpockets operate is a period of the festival and celebrations. In busy areas, there have been reports of bag snatching. If you practice common sense and do not show passports, cash or credit cards in public, the risk of being robbed is relatively low.

The location of Denpasar makes it possible for earthquakes and tsunamis to happen and the existence of volcanoes may lead to eruptions that occur regularly. Sometimes heavy rains can cause landslides and flooding.

Mugging and kidnapping are unlikely to happen to you in Denpasar, especially if you are a tourist. Although the risk is low, it still exists, so try not to go to dangerous areas at night.

Terrorism risk is present throughout the world and the possibility of the attack exists everywhere. Local authorities try their best to prevent any kind of terrorist activity since the terrorists are likely to carry out these attacks anywhere, especially in tourist areas full of people.

Drink spiking is possible in Denpasar as well as credit card fraud. To avoid being the victim of these scams, always keep an eye on your card during transactions and do not accept the drinks from strangers.

When female travelers are in question, Denpasar may be considered very safe, but only if you do not walk alone in distant areas at night and do not accept drinks from unknown people.

So... How Safe Is Denpasar Really?

Denpasar is the city of numerous festivals which attract crowds of people from different parts of the world.

Alun-Alun Puputan is the main square of the capital, mostly safe, but you should not carry your bag on the side of the traffic since motorcycle bag-snatching is possible.

Dogs are holy creatures and there might be a problem with stray dogs that can attack you, which is not the case in other counties.

Even though Balinese people are friendly and hospitable you never know what type of person you have to deal with.

Your belongings might disappear from the villa, so do not leave valuable things inside when you are out.

Tourists should pay special attention to strange-looking people around them and look after their passport and bank cards.

Try not to travel alone and be aware of thieves in public transport.

Bali is a place to be visited, so if you have a chance, do not be afraid to go there, because Bali is a safe island, with lots to do and explore.

How Does Denpasar Compare?