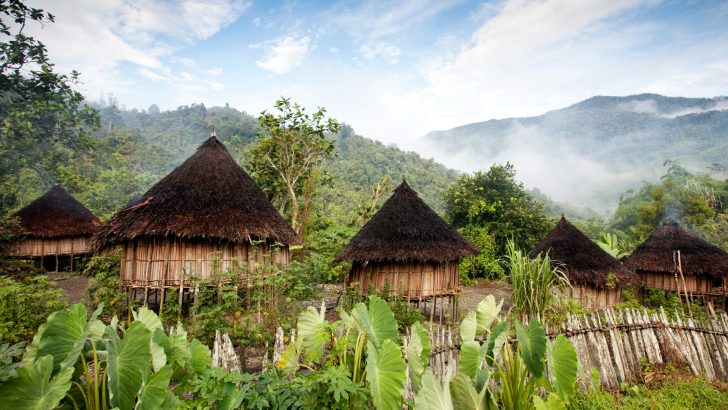 Papua New Guinea is an island country located in Oceania.

The reason this county is, in a sense, unique, is the fact that it offers to tourists a paradox experience.

There’s limited tourists infrastructure outside of the main tourist frequented areas, so moving around the country can be really difficult.

However, the locals of Papua New Guinea are known for their bright spirits and are so welcoming that you will feel like a true guest with hosts willing to go to the distance in order to make you feel comfortable.

Tourism in this country is slowly growing in a number of locations, beyond which the country is not completely explored.

If you want to venture outside of the known, prepare yourself for an adventure.

For the adventure-lovers, the experience of Papua New Guinea is unforgettable.

The hikers will have a marvelous time and the staggering natural beauty of the island is one of the most unforgettable impressions you will take with you, with flora and fauna unmatched anywhere in the world.

You’ll get to see marsupials and birds, including the Raggiana bird-of-paradise (which is also the national symbol) and several species of tree kangaroos.

Though this country is known for its friendly people, Papua New Guinea is not the safest country to visit. It has extremely high crime rates, of both violent and petty crime, especially in the major cities. You should be vigilant and take all possible precaution measures in order to minimize the risk of something wrong happening.

Transportation is not very safe or reliable in Papua New Guinea. If you don't opt for driving, travel in company vehicles, hotel transport or reputable taxis which are definitely a safer alternative to Public Motor Vehicles. Avoid public transport as it is known for not being reliable and is also targeted by criminal groups.

As far as petty theft goes, you can expect bag snatching, car-jacking, and pickpocketing in major tourist areas. Never carry all your money in the same place, and be aware of your surroundings at all times. You should be extremely careful when handling your valuables even in the villages that are considered to be safer.

Since it is located in the tropical region and along the so-called Pacific Ring of Fire, Papua New Guinea is susceptible to natural disasters such as volcanic eruptions, flood, cyclone, landslides, and tsunamis.

Violent crime is, unfortunately, more common in this country than petty theft. Armed robberies, road blocking performed by armed troupes that later rob you, and gangs on roadways that steal your belongings and even rape women are all known occurrences in this country, so be extremely vigilant.

There haven't been any recent terrorist attacks in Papua New Guinea's recent history, but they shouldn't be ruled out, so remain vigilant and aware of your surroundings at all times.

As in any country, there's a risk of getting scammed and especially in poverty-ridden ones, such as Papua New Guinea. Be wary of people trying to distract you in order to steal from you and of taxi drivers overcharging you for a ride. We advise you to be extremely careful when handling money.

Papua New Guinea isn't the safest place for a woman to be visiting alone. If you do go and visit, be sure to avoid remote streets, both during day and night, and do not flash your belongings or handle money in public. Stay out of the streets at night and be vigilant for any possible dangers at all times.

So... How Safe Is Papua New Guinea Really?

Papua New Guinea is considered to be a risky destination, mostly in Australian circles, mostly because of the activities of criminal gangs in major cities, especially in Port Moresby and Lae.

This is one of the reasons you should probably avoid visiting major cities, apart from the fact that they’re mostly boring for tourists and devoid of any culture or natural beauty.

The gang activities are a result of unemployment which is a consequence of domestic migration from farms in the hills into the nearest urban areas.

Armed gangs can also be active on some spots of Highlands highway.

Carjacking and roadblocking by armed troops are also a common occurrence.

Keep in mind that tourists are easy prey for bandits and gang members.

They have been known to steal everything you own and even rape women.

The villages, however, are mostly safe and the locals are so friendly that they will probably just accept you as one of their own.

In many places, if you are alone, there will always be someone willing to escort you to where you want to go, even if you haven’t even asked for help.

This is just their way of treating tourists.

Don’t worry, it is easy to see who is genuinely offering their help and who is trying to scam you or cross you over.

If you find yourself in a dangerous situation, avoid conflicts at all costs and stay calm.

Many people in Papua New Guinea are temperamental and local conflicts, that usually have nothing to do with tourists, can escalate quickly.

Stay out of everyone’s way if this happens and if you get mugged, stay calm and hand over your belongings.

Fortunately, you probably won’t get mugged at gunpoint, since very few people carry guns, though most of them carry bush knives.

It won’t hurt to know that most crime is related to alcohol or marijuana.

How Does Papua New Guinea Compare?